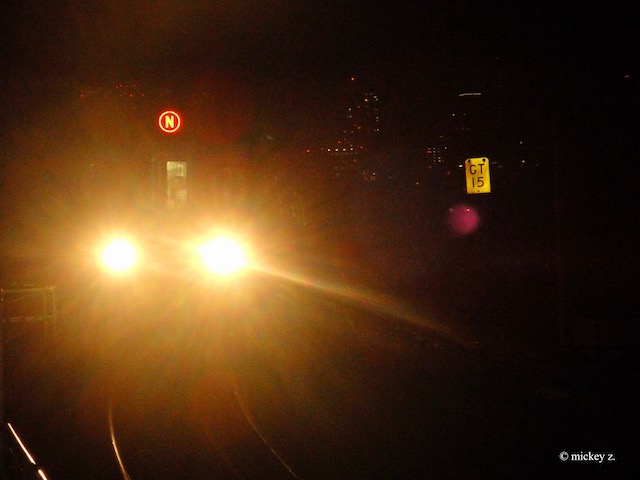 “You can’t get romantic on a subway line…”

(“Everybody Wants Some,” Van Halen)

Thanks to COVID-19 and its patchwork quilt of (over)responses, so many of us have seen our lives change dramatically. As a lifetime New Yorker, for example, I’ve spent incalculable hours riding the subterranean tunnels of transportations we call “the subway.” Since March 2020? Not so much. So, as is my style, I’ll regale you with some train-related tales from over the years. 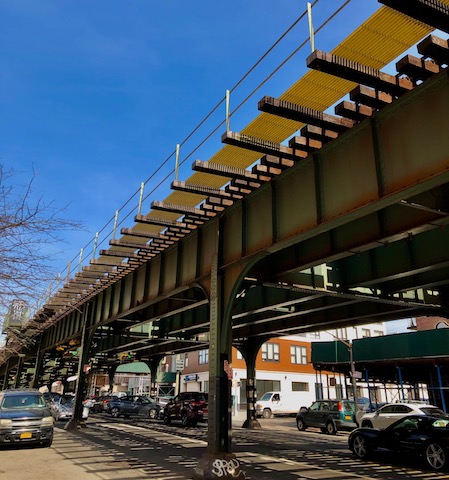 Narrow walkway near the tracks

Growing up near an elevated train presented my friends and I with the opportunity for much mischief. For example, we could steal ripe tomatoes from the fruit stand on 31st Street and toss them at the train passing on the el.

A more dangerous practice involved walking from one station to the next. The first step would be to sneak on the train (I don’t remember ever paying during my entire adolescence). We’d hide near the token booth until we heard the train coming, vault the turnstile, and head up the stairs two at a time. To make it look like he gave a shit, the token clerk would yell “Hey” after us… too late.

We’d take the train one stop from 36th Avenue to 39th Avenue and then walk back. By “walk,’ I mean we’d get to the end of the platform and climb down onto the narrow walkway near the tracks (see the image above). From this point, we could walk without a train hitting us as we looked down onto the street. I wasn’t real big on looking down… but peer pressure is a powerful entity. 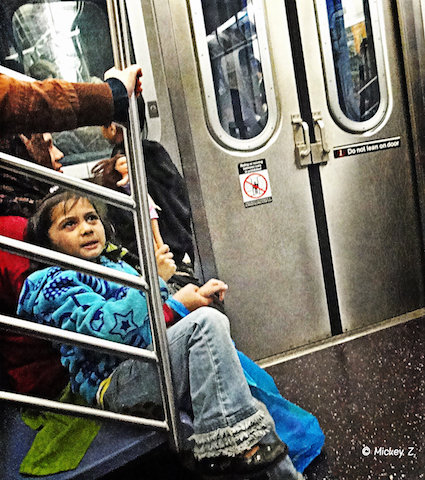 On the train going to high school one morning

I saw a guy who went to grammar school with me dashing up the stairs: James. We were close friends in the fifth grade or so. We’d play Risk — the same ongoing game for days. I’d always fortify myself in the Australia area and go from there. What a lesson for a young mind: conquest, war, domination.

Within a year or so, I got cool. James didn’t. He’d linger on the fringes of my group… never fully accepted: too short, not a good enough athlete. The only thing cool about him was his long hair and the fact that his older sister was considered hot.

So there’s James, running for the train. It’s the N train now. Back then, it was the RR or “double R” as we called it. He reaches the top of the stairs and makes a pretty graceful jump in through the doors. He looks sort of like a hurdler: one foot in front, one behind. A different kind of risk. All appeared well in his 15-year-old world.

In a moment of astonishing synchronicity, his rear foot is a fraction of a second too late. The thin doors close perfectly on the sole of his shoe… rendering James horizontal three feet high in the air: parallel to the filthy subway car’s floor. What were the odds?

We all watch as his books fly from his hands when he reflexively breaks his fall. James lands on his stomach… his foot breaking free from the door’s grasp in the process. He looks around sheepishly, humiliated in front of so many fellow students. He grabs his books and shuffles into a corner. I don’t think he saw me and I made no move to comfort him. I didn’t want to risk being associated with him. Again, peer pressure is a powerful entity.

“And the all-night girls, they whisper of escapades out on the D Train.” 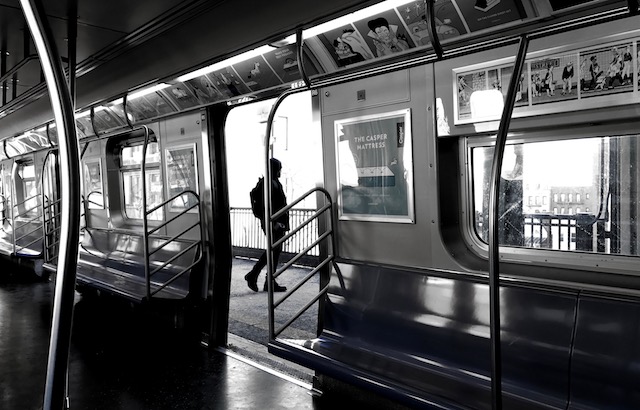 I was about 18 years old, on my way to work one afternoon after school as a “stock boy” at a now-defunct department store called Gimbel’s. I was understandably tired and not looking forward to another episode of Subservient Theater™. Hence, I monopolized both seats of the little corner subway bench to have some space to myself before I got to work.

My feet were up and my eyes were closed as I listened for those words of doom: “Next stop, 34th Street.” However, the sound of a muffled conductor announcement caused me to open my eyes early to suddenly notice that some guy sitting across from me had his little sketchbook out and was trying to draw a picture of none other than yours truly. I kind of smirked and closed my eyes again. Why ruin his day any more than the train ride is? I even felt a little flattered.

Well, when we hit the 34th Street station, I did decide to mess with him anyway. Hey, I was 18. As the people seated near him watched his every pencil stroke, I waited until the last possible moment before de-boarding. In other words, he thought he had at least one more stop to use me as a model but I dashed out before he could react. To this day, however, I sort of wish that I would have at least taken a peek at the sketch.

Back before it was common to see women and girls playing basketball, I remember seeing two black girls, maybe 13 years old bouncing a basketball while waiting for a train at Lexington Avenue. They were quite good and were obviously enjoying themselves

Within a few minutes, a white male cop came sauntering along in a John Wayne gait. He demanded that they stop throwing the ball around. Of all the things that people do in the subway, this felt about minor as it gets. The girls frowned and watched him strut away. One of the girls took the ball from the other and gave it one more hard toss against the wall. The loud bouncing sound echoed across the platform. I felt proud to witness that public act of defiance.

“Subway's no way for a good man to go down” 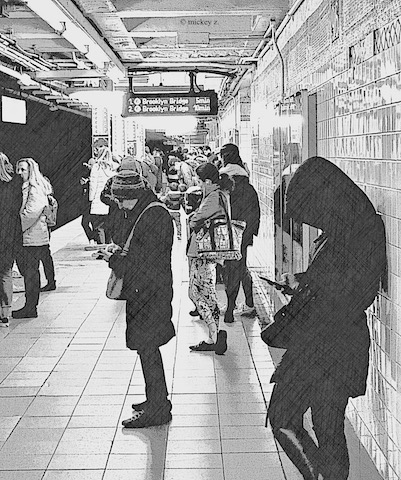 On a Saturday afternoon, a long time ago, I was in Manhattan to interview a famous Park Avenue gynecologist for an article I was writing on infertility. Don’t laugh, it never got published but I still made $250. Pre-internet freelance writing was WAY more lucrative than the meager pay-outs we get today. Anyway, after the interview, I met up with a friend to ride back together to Queens.

On our ride, we encountered an N train car filled with young men who seemed to all work together. About 30 black men and one white guy were loudly discussing something funny that just perhaps happened on the job. Well, even though we were completely unable to ascertain the exact cause for their good humor, we found ourselves laughing along simply because their obvious joy was so infectious. In fact, others in the car also started laughing.

This brief feeling of community is rare on the subway and is virtually impossible during rush hour. The moral of this story? If you jam us together like abused sardines, we’ll probably react in a sub-human manner. Give us some space, and the results will quite often be sportiveness.