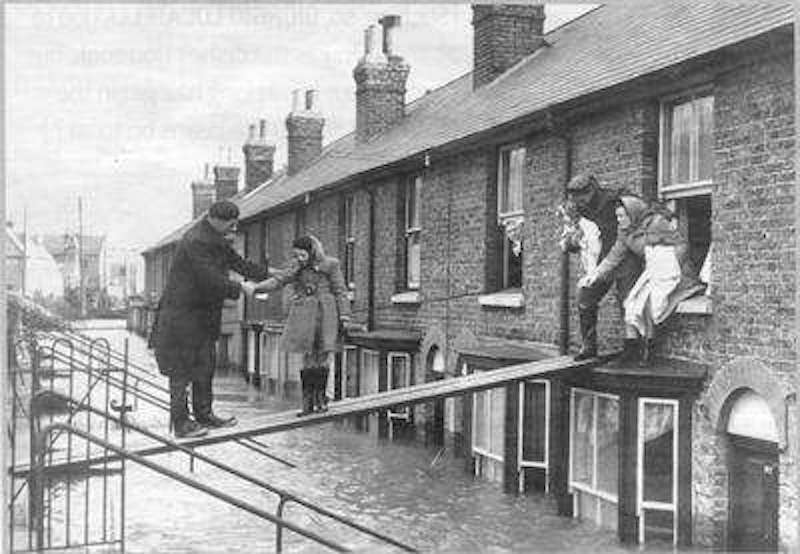 A family is evacuated during the great storm of 1953. Credit: Canterbury City Council

July 7, 2017 (Phys.org) -- Scientists at the University of Southampton are warning that future coastal impact studies must take account of extreme sea levels -- a phenomenon expected to occur more frequently as rising waters combine with high tides and storm surges to potentially devastating effect.

A new study published today in Nature Communications -- led by the University of Central Florida and involving experts from Southampton, Germany and the Netherlands -- suggests that extreme events currently expected to happen on average once every 100 years could, in vulnerable coastlines around the world, occur every decade or even every year by 2050.

As sea levels continue to rise because of global warming, much less intense and far more frequent moderate storms could cause as much damage to vulnerable coastal communities in the future as currently only occurs during rare extreme storms.

Densely populated coastal regions of the USA and large parts of Australia and Europe, including the UK, are thought to be particularly at risk from these future extreme sea levels.

The researchers suggest that vulnerable communities can protect themselves by creating or upgrading infrastructure such as dykes, pumping systems and barriers. New building regulations or flood zones to prevent new infrastructure from being built in high-risk areas could also help mitigate the effects of future extreme sea levels.