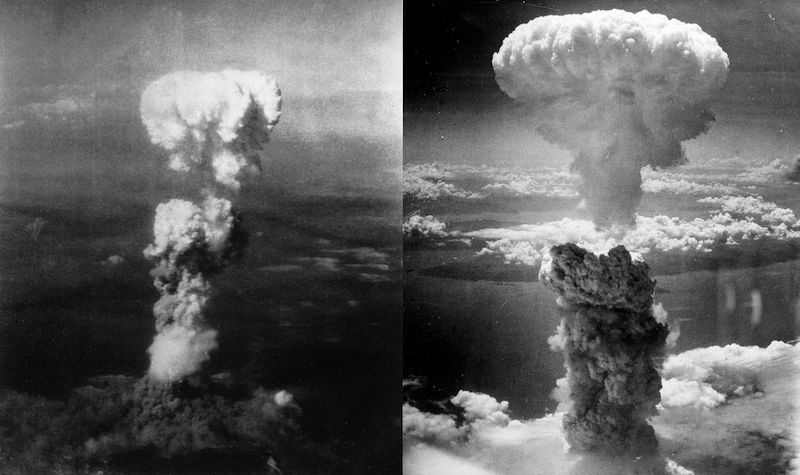 I published the essay, “Sticks, Stones, and Nukes,” several years ago never thinking we would ever have a nightmare Commander In Chief like the present one.

While I trust the men and women of our military not to do stupid things, a Commander In Chief is the commander. We have never openly tested that position’s authority against the Joint Chiefs of Staff for the simple reason that we have always had Presidents who were generally sentient and responsible adults. Whether we liked their politics or not we could trust their judgment when it came to war and the instruments of war.

I am personally concerned with the volatility posed by the man-child presently holding our highest office and his access to nuclear weapons and their delivery systems. And, when you add China and North Korea to the stew, the international situation is extremely volatile requiring a steady hand and a mature intellect to navigate us through these times. We do not have, except for the Joint Chiefs, a steady hand on the tiller today and that is my motivation for publishing this essay again.

It is thought the atomic weapon dropped on Hiroshima resulted in the deaths of approximately 90,000 to more than 100,000 people, most of whom were noncombatants.

In Nagasaki, the second target, at least 80,000 casualties resulted. During the Cuban Missile Crisis large Soviet cities were targeted with hydrogen weapons to be delivered mostly by ICBMs with less than 30 minutes of flight time from U.S. silos. Large American population centers were likewise targeted by the Soviets. It is certain that with such little warning millions of people would have been killed on both sides, a zero-sum game if there ever was one.

Warfare began with sticks and stones. Until modern times, casualties were counted in ones and twos, then hundreds in WWI, and then in WWII, thousands, and those generally involved only actual combatants. Until weapons such as cannons and longbows, it was also usually a matter of one-on-one personal combat. Today, however, a crew of two has the power to kill millions of people thousands of miles away on the opposite side of the planet most of whom would be innocents.

The power to kill millions of human beings in one fell swoop once unimaginable is today’s reality. Military personnel in the US, Russia, and China sit around the clock at their underground consoles with exactly that capability. 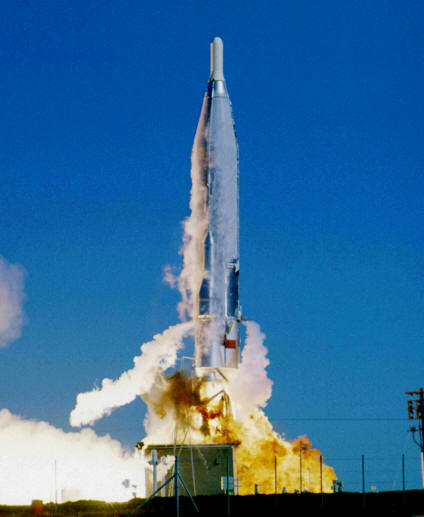 When I served as an Atlas F ICBM launch control officer in the Strategic Air Command during the Cuban Missile Crisis, SAC was called to DEFCON 2, one step from launching our weapons. I don’t recall conversations about the ethics or morals involved in expending nuclear weapons then. Our concerns were about lawful orders and technical matters not moral or ethical issues.

Philosophical considerations would not have served the purpose of reactive or proactive national defense in the face of what was believed to be an imminent Soviet threat. We were the front lines of deterrence and took that responsibility seriously. It is true, also, that some officers and airmen asked to be relieved of their assignments as launch personnel because of their religious beliefs. I personally assisted a few airmen to find different assignments without prejudice.

I managed to carry out my duties as a launch officer for several years because I believed mutually assured destruction was the deterrent. I trusted the Commander In Chief, John F. Kennedy. Our unhesitating willingness to launch was what kept nuclear war at bay.

Recently, the disaffection of Minuteman missile crews standing alert has been a major scandal. Cheating on tests was apparently rampant as was sleeping on the job. The crews were bored perhaps by inactivity. Minuteman crews have meals prepared for them topside, above ground sleeping quarters, all in all pretty cushy arrangements compared with the Atlas and Titan crews of the 60s.

I have no doubt the lack of a clearly defined threat or tangible enemy was also a contributing factor. Of course, the Air Force was alarmed and perhaps shocked as more and more questionable behavior was exposed. The immediate remedy was the removal or retraining of the officers involved. Efforts were also made to render the living and work situation more tolerable.

Recently I read in the news crew members being awarded medals apparently not for facing down an enemy but, it would seem, for overcoming ennui. I hope it works. The air and missile crews of the Cuban Missile Crisis received no medals, not even a thank you -- what we did was nothing less than what was expected. What we got instead was more practice countdowns, more testing and on-site performance evaluations, more classroom work, more alerts -- doing exactly what was expected of us. Minimum passing grade on tests remained 100 percent and some officers and airmen, a few personal friends in fact, were eliminated.

Over the years I have found myself thinking more and more about my own thinking during those tense days. I remain secure with the correctness of my decisions and my commitment at that time and, at the same time, I am discomfited by them. On the one hand, how could anyone go along with mutually assured nuclear destruction while on the other, how could we have not?

Several years ago my wife and I wrote a screenplay about that time and its dilemmas titled “Commit” after the name of the last button on the launch control console, a command from which there was no reversal – once pressed the missile was committed to launch, a very large hydrogen warhead would be on its way to target. Detonation was 15 to 20 minutes minutes away or less depending on the target. The screenplay won a prize from the Page International Screenwriting competition in 2011 and was performed as a table read in Santa Fe, New Mexico where the story was well received by most of the audience.

Interestingly, for some, especially the younger crowd, I got the feeling the events described in the screenplay were too abstract and, for them, the likelihood of nuclear war so remote they could have just as easily been listening to a reading of Beowulf. That disconnect I think expresses the crux of the matter. The general awareness of warheads underground in the Northern Plains and under the ocean in submarines attended to by increasingly disaffected and bored crews paints a picture both dangerous and encouraging. The dangers remain real, however, and I have come to understand that for many people nuclear war cannot be imagined. Several years ago I had a personal experience that made my time sitting at an ICBM launch console real.

I worked for several years in North Western Poland, in the beautiful and ancient city of Torun, immediately after the fall of Communism. There were still Soviet soldiers present who had been stranded there selling their gear in the market place  for money to buy food. I arrived in the middle of the night on my first visit and taken from the airport in Warsaw by a company driver. I was dropped at my hotel and went to my room hoping to get a few hours of sleep. I opened the window for fresh air and plopped down on the bed but wasn’t able to sleep. I could hear in the distance what I took to be heavy artillery fire. Looking out the window to the West I could see the sky illuminated with each firing.

In the morning I was met by my tlumacz (my interpreter) and driven to the factory. As we were driving along the Vistula River I asked about the heavy artillery and was informed that this was a former Soviet base which had been taken over by the Polish army and converted now for artillery training. Converted from what? I asked. It had been throughout the Cold War, I was told, a Soviet medium range missile base generally thought to be targeting most of Western Europe.

It took me a moment to continue the conversation as I realized this base had been one of my targets during the Cold War! There would be no city here had we struck that base. Of course I never mentioned this to anyone for as long as I worked in Poland. The wheel turns in amazing ways.

The danger today, I believe, lies in the existential weariness of nearly 60 years, more or less, facing hypothetical threats as compared with the reality of the Cold War and in the moment an unsteady hand on the nuclear trigger. On the other hand, the encouraging aspect is that we have averted nuclear war for decades and now there is a growing international awareness of the nihilism represented by nuclear warfare and there are actions to eliminate those weapons.

There can be no winners in a nuclear war only losers -- nothing would be gained, civilization would be lost -- we would, without question, be back to sticks and stones. If there is hope for civilization, abolition of nuclear weapons must be the first step. 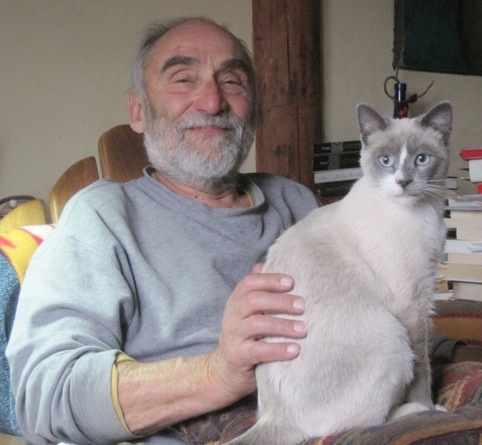 Genius cat Sheba with Emanuele Corso, looking like "an old Sicilian."
Emanuele Corso’s essays on politics, education, and the social contract have been published at  NMPolitics, Light of New Mexico, Grassroots Press, Nation of Change, World News Trust and his own: siteseven.net. He taught Schools and Society at the University of Wisconsin-Madison where he took his PhD. His BS was in Mathematics. He is a veteran of the U.S. Air Force’s Strategic Air Command where he served as a Combat Crew Officer during the Cuban Missile Crisis. He has been a member of both the Carpenters and Joiners and IATSE (theatrical) labor unions and is retired from IATSE. He is presently working on a book: Belief Systems and the Social Contract. He can be reached at This email address is being protected from spambots. You need JavaScript enabled to view it.