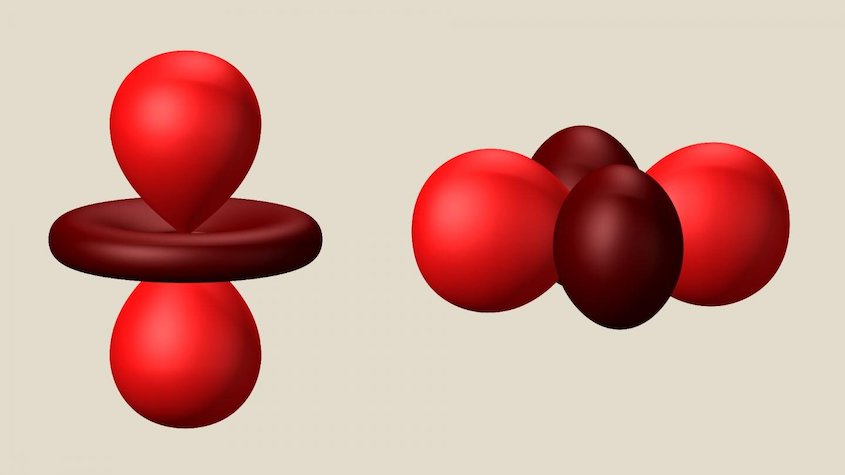 These balloon-and-disc shapes represent an electron orbital -- a fuzzy electron cloud around an atom's nucleus -- in two different orientations. Scientists hope to someday use variations in the orientations of orbitals as the 0s and 1s needed to make computations and store information in computer memories, a system known as orbitronics. A SLAC study shows it's possible to separate these orbital orientations from electron spin patterns, a key step for independently controlling them in a class of materials that's the cornerstone of modern information technology. Credit: Greg Stewart/SLAC National Accelerator Laboratory

May 15, 2020 (Phys.org) -- In designing electronic devices, scientists look for ways to manipulate and control three basic properties of electrons: their charge; their spin states, which give rise to magnetism; and the shapes of the fuzzy clouds they form around the nuclei of atoms, which are known as orbitals.

Until now, electron spins and orbitals were thought to go hand in hand in a class of materials that's the cornerstone of modern information technology; you couldn't quickly change one without changing the other. But a study at the Department of Energy's SLAC National Accelerator Laboratory shows that a pulse of laser light can dramatically change the spin state of one important class of materials while leaving its orbital state intact.

The results suggest a new path for making a future generation of logic and memory devices based on "orbitronics," said Lingjia Shen, a SLAC research associate and one of the lead researchers for the study.

"What we're seeing in this system is the complete opposite of what people have seen in the past," Shen said. "It raises the possibility that we could control a material's spin and orbital states separately, and use variations in the shapes of orbitals as the 0s and 1s needed to make computations and store information in computer memories."

The international research team, led by Joshua Turner, a SLAC staff scientist and investigator with the Stanford Institute for Materials and Energy Science (SIMES), reported their results this week in Physical Review B Rapid Communications.