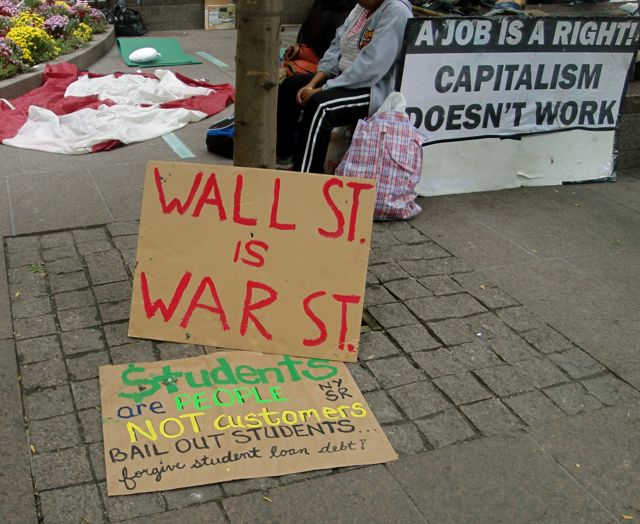 "Fascism should more appropriately be called Corporatism because it is a merger of state and corporate power." --Benito Mussolini

There's plenty that feels new and fresh about Occupy Wall Street (OWS): the younger participants, the scope of the coalition, the endurance, the creativity, and the outrage. What's not new is the target of that outrage: Wall Street, Corporate America, and the politicians they fund have been at this deadly game for more than a century.

Mic Check: The pursuit of profit long ago transcended national borders and well... anything resembling justice, community, solidarity, or morality.

To learn more about these roots of Occupy, read on...

Know Your History
In the years before World War II, for example, doing business with Hitler’s Germany or Mussolini’s Italy (or, as a proxy, Franco’s Spain) proved no more unsavory to the captains of industry than, say, selling military hardware to Indonesia does today.

What’s a little repression when there’s money to be made?

“Many leaders of Wall Street and of the U.S. foreign policy establishment had maintained close ties with their German counterparts since the 1920s, some having intermarried or shared investments,” writes investigative reporter Christopher Simpson. “This went so far in the 1930s as the sale in New York of bonds whose proceeds helped finance the Aryanization of companies and real estate looted from German Jews.... U.S. investment in Germany accelerated rapidly after Hitler came to power.”

In case you missed it: U.S. investment in Germany accelerated rapidly after Hitler came to power.

Such investment increased “by some 48.5 percent between 1929 and 1940, while declining sharply everywhere else in continental Europe.”

Mic Check: When William E. Dodd, U.S. ambassador to Germany during the 1930s, declared “a clique of U.S. industrialists is working closely with the fascist regime[s] in Germany and Italy,” he wasn’t kidding.

In December 1933, Standard Oil of New York invested $1 million in Germany for the making of gasoline from soft coal. Undeterred by the well-publicized events of the next decade, Standard Oil also honored its chemical contracts with I.G. Farben -- a German chemical cartel that manufactured Zyklon-B, the poison gas used in the Nazi gas chambers -- right up until 1942.

All of these businesses were more than happy to see the German labor movement and working-class parties smashed and for many of these companies, operations in Germany continued during the war (even if it meant the use of concentration-camp slave labor) with overt U.S. government support.

“Pilots were given instructions not to hit factories in Germany that were owned by U.S. firms,” writes Michael Parenti. “Thus Cologne was almost leveled by Allied bombing but its Ford plant, providing military equipment for the Nazi army, was untouched; indeed, German civilians began using the plant as an air raid shelter.”

An illustrative example of how the 1% is loyal only to the 1% is International Telegraph and Telephone (ITT). This multi-national conglomerate was founded by Sosthenes Behn -- an unabashed supporter of the Führer even as the Luftwaffe was bombing civilians in London -- and was responsible for creating the Nazi communications system, along with supplying vital parts for German bombs.

According to author Jonathan Vankin, “Behn allowed his company to cover for Nazi spies in South America, and one of ITT’s subsidiaries bought a hefty swath of stock in the airline company that built Nazi bombers.”

Behn himself met with Hitler in 1933 (the first American businessman to do so) and became a double agent of sorts. While reporting on the activities of German companies to the U.S. government, Behn was also contributing money to Heinrich Himmler’s Schutzstaffel (SS) and recruiting Nazis onto ITT’s board.

In 1940, Behn entertained a close friend and high-ranking Nazi, Gerhard Westrick, in the United States to discuss a potential U.S.-German business alliance -- precisely as Hitler’s blitzkrieg was overrunning most of Europe and Nazi atrocities were becoming known worldwide.

In early 1946, instead of facing prosecution for treason, Behn ended up collecting $27 million from the U.S. government for “war damages inflicted on its German plants by Allied bombing.” At that juncture, Behn was in the perfect position to lobby President Truman concerning the newly formed Central Intelligence Group (CIG).

Meeting with the chair of the Joint Chiefs of Staff, Admiral William D. Leahy, in the White House, Behn, as recorded in Leahy’s diary, generously offered for consideration “the possibility of utilizing the service of [ITT’s] personnel in American intelligence activities.”

Meanwhile, Sullivan and Cromwell was the most powerful Wall Street law firm of the 1930s. John Foster Dulles and Allen Dulles -- the two brothers who guided the firm; the same two brothers who boycotted their own sister’s 1932 wedding because the groom was Jewish -- served as the contacts for the aforementioned I.G. Farben (the company that put the gas in gas chambers).

During the pre-war period, the elder John Foster Dulles led off cables to his German clients with the salutation “Heil Hitler,” and he blithely dismissed the Nazi threat in 1935 in a piece he wrote for the Atlantic Monthly. In 1939, he told the Economic Club of New York, “We have to welcome and nurture the desire of the New Germany to find for her energies a new outlet.”

“Hitler’s attacks on the Jews and his growing propensity for territorial expansion seem to have left Dulles unmoved,” writes historian Robert Edward Herzstein. “Twice a year, [Dulles] visited the Berlin office of the firm, located in the luxurious Esplanade Hotel.”

Ultimately, it was little brother Allen who actually got to meet the German dictator, and eventually smoothed over the blatant Nazi ties of ITT’s Sosthenes Behn. “(Allen) Dulles was an originator of the idea that multinational corporations are instruments of U.S. foreign policy and therefore exempt from domestic laws,” Vankin writes.

Know Your Enemy
Please allow me to repeat: Wall Street has always been War Street.

Calling war "possibly the oldest, easily the most profitable, sure the most vicious" racket of all, infamous U.S. Marine Brigadier General Smedley D. Butler declared (back in the 1930s): "It is the only [racket] in which profits are reckoned in dollars and losses in lives … I spent 33 years being a high-class muscle man for Big Business, for Wall Street and the bankers. In short, I was a racketeer for capitalism."

Thousands upon thousands of racketeers for capitalism helped lay the foundation for a well-informed global movement with passion, endurance, and diversity. These racketeers have brought us to the brink so we must complete the task of bringing down the system that spawned them while cultivating new models of human culture.

In order for all species -- and the ecosystem itself -- to survive, Wall Street must be permanently dismantled. There is no middle ground.

The time has come to choose: Which side of history are you on?

Upcoming Mickey Z. event in NYC: Why Occupy? One Planet, One Struggle (May 6)