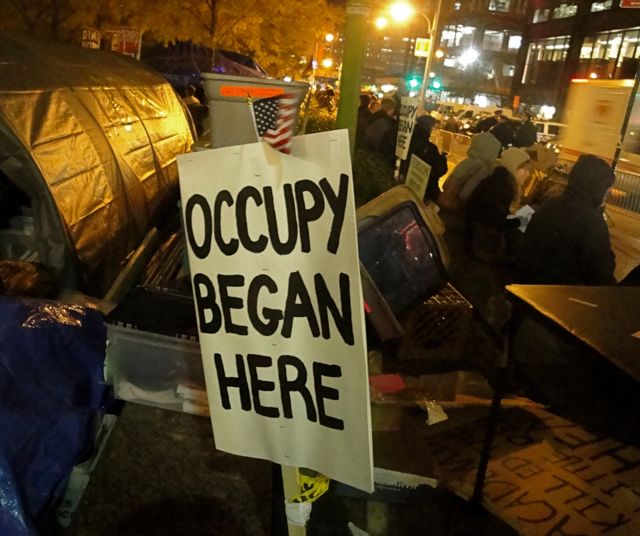 “In the present circumstances, I’d say that the only thing worth globalizing is dissent.” --Arundhati Roy

During a panel on animal liberation at the recent NYC Anarchist Bookfair, one of my co-presenters started a discussion about the World Trade Organization (WTO). Besides pointing out the crucial connections between such organizations/treaties and the global meat and dairy industries, he also reiterated the important role anti-WTO protests played in eventually inspiring Occupy Wall Street (OWS).

After that event, I was asked two questions that provoked this article. The first came from someone in the audience: "What are WTOs? I didn't understand that part at all."

Question #2 came from a fellow panelist who appeared baffled by my outspoken support for OWS throughout the event: "What is it that you like so much about Occupy?"

In the name of answering those questions, please allow me to cover way too much ground in a single article...

The WTO-OWS Connection
Created in 1995, the WTO describes itself as such:

The World Trade Organization (WTO) is the only global international organization dealing with the rules of trade between nations. At its heart are the WTO agreements, negotiated and signed by the bulk of the world’s trading nations and ratified in their parliaments. The goal is to help producers of goods and services, exporters, and importers conduct their business.

Another take on the WTO from Global Exchange:

The World Trade Organization (WTO) is the most powerful legislative and judicial body in the world. By promoting the free trade agenda of multinational corporations above the interests of local communities, working families, and the environment, the WTO has systematically undermined democracy around the world.

In 1994, Ralph Nader offered $10,000 to any member of Congress who would read the 500-page treaty and answer ten questions about it. Colorado Senator Hank Brown took up the challenge. He passed the quiz and promptly announced that he would be voting against the WTO.

Brown’s vote was not nearly enough as others in Congress voted blindly in favor of corporate domination. Thus, when the truth about the WTO eventually became more widely known, the only vote left was to raise hell.

The organization’s decision to hold its annual meeting in Seattle in late 1999 provided activists with the stage from which they could heard by millions... and they made global headlines by essentially shutting down the meetings.

The protests weren't perfect, of course. Different factions within the demonstration feuded over goals, issues, and tactics. Even the mainstream media recognized that paradox, with the Los Angeles Times stating:

“Leaders of the peaceful demonstrations have lashed out at the anarchists, accusing them of undermining their anti-globalism message by breaking windows and destroying property. The anarchists in turn accused the Seattle protesters of protecting the same private-property interests that the WTO represents.”

Infighting aside, the November 1999 events in Seattle injected American dissidents into an internationalist movement. In their book, 5 Days That Shook the World: Seattle and Beyond, Jeffrey St. Clair and Alexander Cockburn declared that the “street warriors” who were “initially shunned and denounced by respectable ‘inside strategists,’ scorned by the press, gassed and bloodied by the cops and national guard” were able to:

Activist and author Chuck Munson of the Infoshop website listed some of the many accomplishments of the movement, post-Seattle. These include:

Sound familiar? As with OWS, the Battle in Seattle was not single-issue -- not even close -- and owed much of its success to the role anarchists played in cultivating a non-hierarchical approach aiming at systemic change rather than incremental reform.

“Ours is a worldwide guerilla war of publicity, harassment, obstructionism,” wrote St, Clair and Cockburn. “It’s nothing simple, like the ‘Stop the War’ slogan of the 1960s. Capitalism could stop that war and move on. American capitalism can’t stop trade and survive on any terms it cares for.”

As Michael Albert of ZNet added, the goal is to globalize equity not poverty, solidarity not anti-sociality, diversity not conformity, democracy not subordination, and ecological balance not suicidal rapaciousness.

The Obama-OWS Connection
Dissent spreads slowly in a heavily conditioned society and the United States is as conditioned as any society in history. It would require a wake-up call -- a betrayal -- of epic proportions to get more people in the streets to create a movement with endurance.

Enter Mr. Yes We Can.

In 2008, Barack Obama's campaign hypnotized far too many on the entrenched Left but -- more significantly -- energized and politicized a new generation of Americans. When the Pope of Hope inevitably exposed himself as just another corporate-funded war criminal -- when "hope & change" became indistinguishable from "shock & awe" -- it was both a profound deception and a powerful lesson: "Change we can believe in" is never top-down... real change starts with the 99%.

By setting the bar so high, Obama inspired misguided but sincere hope in millions. By betraying those millions so swiftly, he broke a cardinal rule of marketing. He revealed to voters/consumers that there was little or no difference between the products being offered and thus inadvertently helped launch a movement I see as our last, best chance.

Which brings me back to the second question I faced the other night: "What is it that you like so much about Occupy?" Inherent in the wording (and tone of voice) was distrust if not disdain for OWS.

Without enough time to offer more than a quick answer, I focused on how the 99% umbrella is creating a massive coalition instead of single-issue activists -- the first time I'd seen this since Seattle in 1999, yet far more enduring than any singular event.

Choose Process Over Purity
I'm not sure how my brief reply sounded to my co-panelist but I am sure how his question sounded to me. It brought me back to the early days of OWS when I found myself writing stuff like this, over and over:

Occupation is imperfection. Whether you call it anarchist, socialist, democratic, or utopian -- it will never be perfect. More importantly, even if the initial results don't satisfy the majority, consider this: The results will still be far better than anything we have now.

Occupation does not end. Let's not waste time imagining potential endgames when we all know that a successful movement must be an enduring process.

Say no to purists, say no to opportunists, but find reasons to say yes to occupation.

There has never been a better time to be an activist...

When future generations ask what you did to defend all life on earth, will you talk of how effortlessly you deconstructed the impure revolutionary theory of those on the front lines or will you simply and honestly reply: "I did my part"?

So, beware the more-radical-than-thou purists and remain vigilant in smoking out those activists seeking excuses to remain in-activists. No one knows how OWS will play out but without the committed support of a wide range of allies, it cannot grow, evolve, and realize its potential.

The choice is yours: Find fault or find common ground. The future is waiting upon your decision.