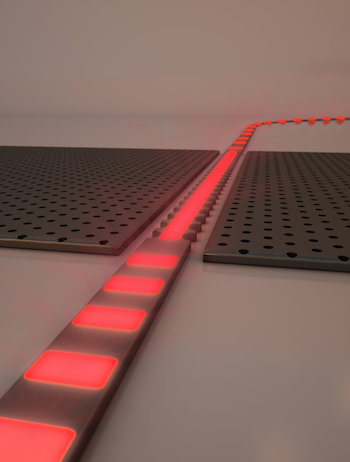 A zero-index waveguide compatible with current silicon photonic technologies. Credit: Second Bay Studios/Harvard SEASOct. 9, 2017 (Phys.org) -- In 2015, researchers at the Harvard John A. Paulson School of Engineering and Applied Sciences (SEAS) developed the first on-chip metamaterial with a refractive index of zero, meaning that the phase of light could be stretched infinitely long. The metamaterial represented a new method to manipulate light and was an important step forward for integrated photonic circuits, which use light rather than electrons to perform a wide variety of functions.

Now, SEAS researchers have pushed that technology further - developing a zero-index waveguide compatible with current silicon photonic technologies. In doing so, the team observed a physical phenomenon that is usually unobservable -- a standing wave of light.

The research is published in ACS Photonics. The Harvard Office of Technology Development has filed a patent application and is exploring commercialization opportunities.

When a wavelength of light moves through a material, its crests and troughs get condensed or stretched, depending on the properties of the material. How much the crests of a light wave are condensed is expressed as a ratio called the refractive index—the higher the index, the more squished the wavelength.

When the refractive index is reduced to zero the light no longer behaves as a moving wave, traveling through space in a series of crests and troughs, otherwise known as phases. Instead, the wave is stretched infinitely long, creating a constant phase. The phase oscillates only as a variable of time, not space.

This is exciting for integrated photonics because most optical devices use interactions between two or more waves, which need to propagate in sync as they move through the circuit. If the wavelength is infinitely long, matching the phase of the wavelengths of light isn't an issue, since the optical fields are the same everywhere.