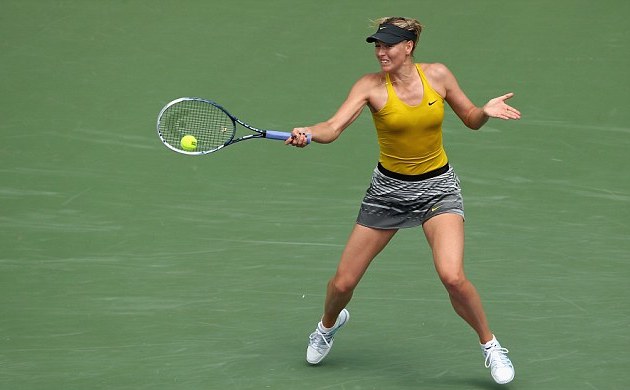 March 13, 2016 (PaulCraigRoberts.org) -- One of the world’s best female tennis players, Maria Sharapova, has been suspended, because a medicine she has been taking legally under a doctor’s prescription for 10 years was suddenly retroactively declared to be a prohibited substance that is a “metabolic modulator.”

The medicine, known as mildronate and also as meldonium in its banned name, has been in medical use for thirty years. Its inventor declared that the prohibition of mildronate “is a crime” and will lead to deaths among athletes. He says that it has not been proven that the medicine enhances athlete performance, but it does protect their hearts from over-exertion.

The medicine is not designed to improve athletic performance. However, the medicine does protect athletes’ hearts as they push to their limits. Apparently it is this aspect of the medicine that caused the World Anti-Doping Agency to conclude that the medicine facilitates recovery from exertion and, thereby, enhances physical capabilities.

It is immaterial to my point whether the medicine’s inventor or WADA is correct. My point is that for a widely used legal substance to be put on a prohibited list for athletes, there should first be public discussion. If the decision to prohibit the medicine is shown to be warranted, there should be enough advance notice provided so that athletes using the medicine for health reasons such as diabetes or magnesium deficiency, or to protect their heart from failing under exertion, have time to clear their bodies of traces.

This was not done. The medicine was added to the prohibited list on Jan. 1 under the name of meldonium, a name that Sharapova did not recognize. Even if she had been aware that her medicine had been banned, there was not sufficient time between January 1 and the January Australian Open for her to be clear of the substance. WADA’s decision was made in a way that guaranteed that Sharapova would fail the test, a test she has always passed in her rise to dominance in women’s tennis. Other than WADA’s incompetence, it is difficult to read this other than WADA accepted a bribe to eliminate Sharapova from the Australian Open and subsequent events.

Examining this matter from the standpoint of the facts, it is unclear whether WADA consists of a bunch of incompetent and inconsiderate dopes who were unaware of the medicinal use of meldonium, or whether this is an orchestrated stunt to cast more discredit on Russia and Russian athletes.

Perhaps what we are witnessing is an attempt on the part of less capable American and Europeans to move aside dominant Russian athletes in order to be able to capture their lucrative endorsements. Nike, Tag Heuer, and Porsche suspended their contracts with Sharapova. Such cowardly behavior speaks poorly of the integrity of the three companies. The absence of loyalty and support that the companies have shown to their star associate raises questions about the character of the companies’ managements and the quality of their products.

As the record proves that Sharapova’s use of the medicine is clearly for medical, not performance, reasons, perhaps she will be reinstated by the International Tennis Federation.

Even if she is reinstated, the Tennis Federation, WADA, and her sponsors have succeeded in messing with her mind. WADA official Dick Pound, who is trying to get Russian athletes banned from the 2016 Olympic Games in Brazil, demonstrated his own lack of integrity when he seized on Sharapova to boost his anti-Russian propaganda, declaring that she was “reckless beyond description” and guilty of “a big mistake.” As there is no justification for Pound’s irresponsible assertions, it raises questions about the integrity of WADA itself.

An athlete’s mental state is more important to the athlete’s performance than performance-enhancing drugs. I was disappointed to see that even RT misrepresented Sharapova’s situation as “explosive news” that she had “failed a drug test.” She did no such thing! She was trapped, perhaps purposely, by the sudden inclusion under a different name of a medicine she has been taking for a decade under medical supervision.

Until Sharapova is reinstated, competitors will benefit from less strenuous competition.

I remember from my studies of post-Roman Europe that various rulers to the extent that they could mint coins featured the Roman Emperor on the coins, not themselves. The reason for this, I was told, is that people associated coinage with Rome and were accustomed to a Roman image. To make their coinage acceptable, petty kings identified their coins with Rome.

Perhaps this is what we are witnessing today in Russia and China’s acceptance of Western domination. The United States and Europe -- the West -- comprise the hallmark of approval. Russia and China, despite their independent power, desire this approval. The West knows that Russia and China seek approval and denies it to them as an assertion of the West’s superiority.

It is not Russia and China that destroyed seven countries in the past 15 years. It was Washington and its European vassals. It is not Washington that is accused of human rights violations that are so severe that millions of peoples are fleeing into Europe in order to escape death at the hands of the Americans. It is Russia’s attack on ISIS that is blamed for the European refugee problem. It is Russia and China that are accused of human rights violations, not the real perpetrators -- Washington and its vassals.

The West uses disapproval as a weapon. Washington disapproved the Sochi Olympics. While Putin was in Sochi, Washington overthrew the government of Ukraine and created a problem for Russia. While Putin was at the Beijing Olympics, Washington gave the go ahead to its Georgian puppet to attack South Ossetia and to kill Russian peacekeepers. Certainly, Putin should not go to the Brazilian Olympics this year. Washington might overthrow Putin in his absence. Certainly, Washington wants to be rid of Putin, and so do the Russian Atlanticist Integrationists whose sole ambition is to be an approved part of the West. Just as Washington had its Ukrainian puppet government lined up to take office once Washington overthrew Yanukovych, Washington has Atlanticist Integrationists lined up as its puppet government to take over Russia.

It is ironic that it is the hallmarked West, not the disapproved countries, that is in decline, culurally, morally, spiritually, and economically. Why do Russia, China, India, and every other country free of US imperial domination desire to be associated with a corrupt, immoral, declining part of the world whose economic and political existence depends on extending its hegemony over the remaining productive parts of the world in order to loot the countries for the benefit of the West?

Why are Russia and China concerned that they receive the approval of the West?