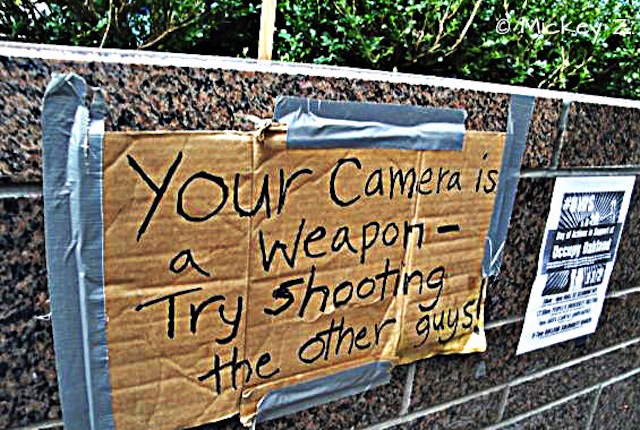 “I went into photography because it seemed like the perfect vehicle for commenting on the madness of today’s existence.”

The most effective weapon in the arsenal of the 1% is the corporate media. Not even the brute force of the Blue Bloc compares with the immense power of programming via propaganda.

Carey’s premise is a primary reason why I’ve spent so much time and taken so many photos at activist-related events. The images presented by the mainstream media (and even some of the alternative media) predictably range from condescending to confusing, from misleading to myopic. But thanks to DIY photojournalism, tens of millions know better.

Cameras of all sizes and styles are essential tools -- weapons even -- providing on-site verification of global support in the form of massive solidarity marches in other countries. We don’t have to believe that some 99% voices are being ignored if we are providing our own evidence to the contrary.

This is the power of photography and I’m just one of thousands doing the same -- following the lead of inspirational photojournalists like Dorothea Lange. If you’re not familiar with Lange or you just use a little aim & shoot motivation, please read on…

“How to see without a camera”
When you hear talk about the “Greatest (sic) Generation,” it’s kinda funny how this detrimental myth manages to ignore any contradictory evidence -- for example, how generation father figure (FDR) signed Executive Order 9066 in February 1942, interning more than 100,000 Japanese-Americans without due process. Yeah, an entire generation would indeed have to be great -- at marketing, that is -- to convince us that they were able to fight a “good war” with a segregated army and racist prison camps.

However, we know a lot more today about the hypocritical crime perpetrated against Japanese-Americans thanks to the power of the photographic images of a woman named Dorothea Lange.

Through her work with farm families and migrant workers during the Great Depression, Lange was familiar with images of displacement. But, when she was hired by the War Relocation Authority to document life in Japanese neighborhoods, processing centers, and camp facilities, the racial and civil rights issues added a new dimension.

“What was horrifying was to do this thing completely on the basis of what blood may be coursing through a person’s veins, nothing else. Nothing to do with your affiliations or friendships or associations. Just blood,” Lange said. As the Library of Congress wrote, “Lange quickly found herself at odds with her employer and her subjects’ persecutors, the United States government.”

“Lange’s attempts to use her camera to expose the social impact of the mass incarcerations came into conflict with the authorities,” says journalist Richard Phillips. “She was regarded with suspicion by the military, and even called before the War Relocation Authority on two occasions for alleged misuse of her photographs. The Wartime Civil Control Agency impounded most of her internment photographs, refusing to release them until after the war.”

True to her belief that the camera could teach people “how to see without a camera,” Lange created images of human dignity and courage in the face of vast injustice. But it wouldn’t be until seven years after her death that her work would reach a wide audience. The Whitney Museum incorporated 27 of Lange’s Japanese internment camp images into an exhibit called “Executive Order 9066.”

New York Times critic A.D. Coleman subsequently called Lange’s photographs “documents of such a high order that they convey the feelings of the victims as well as the facts of the crime.”

Today, we need 10 million like Dorothea Lange, practicing direct action photojournalism -- shooting in the name of justice for all life on Planet Earth.

Let your camera’s eye see more than meet the eye
Obviously, the need for photojournalism goes well beyond the United States. Most of the world’s 99% endure oppressive conditions that often remain unreported and thus, remain essentially invisible. If one of the impacted humans fell asleep and woke up at, say, Zuccotti Park, they might think they’ve died and gone to heaven.

This makes it all the more urgent for us to connect with allies who live under daily threats like Predator drones and World Bank-enforced economic policies.

Without image-based evidence, we might believe that smart bombs never miss or American soldiers don’t commit atrocities or that sweatshops are figments of some bleeding heart’s imagination.

Without photographs and video to paint a more complete picture, it’d be a whole lot more difficult to inspire everyday people to embrace everyday activism.

This, my friends, is the clout of the camera. It all starts with that little digital weapon you hold in your hands -- and when you share those photos, don’t forget too add some thoughtful and/or detailed captions.

As Dr. Seuss sez: “Words and pictures are yin and yang. Married, they produce a progeny more interesting than either parent.”

Don’t let the 1% hide their global crimes. Don’t let the 99% hide behind the “I didn’t know” façade. Transparency leads to action.

Note: To continue conversations like this, come see Mickey Z. in person on Nov. 7 in NYC for One Year After Hurricane Sandy: Activism, Solidarity, Animal Liberation.