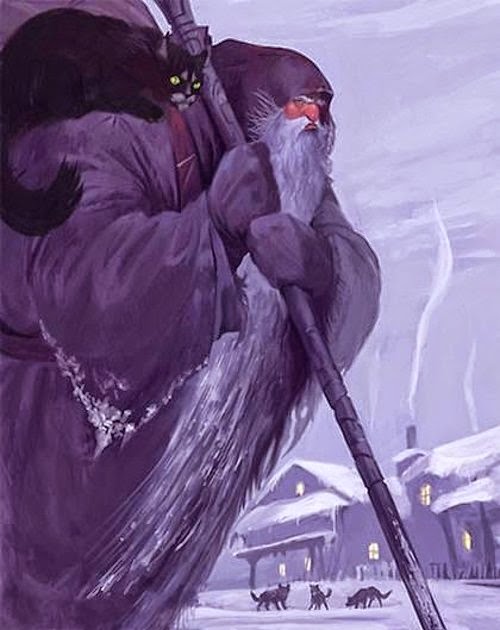 Ancient Slavic god Zimnik: a squat old man, long hair the color of snow, wears a white coat, always barefoot. Carries an iron staff, one swing with which instantly freezes everything solid. Can summon snowstorms, ice storms and blizzards. Goes around taking whatever he likes, especially children who misbehave.

Jan. 13, 2015 (CLUBORLOV) -- Recent events, such as the overthrow of the government in Ukraine, the secession of Crimea and its decision to join the Russian Federation, the subsequent military campaign against civilians in Eastern Ukraine, western sanctions against Russia, and, most recently, the attack on the ruble, have caused a certain phase transition to occur within Russian society, which, I believe, is very poorly, if at all, understood in the west. This lack of understanding puts Europe at a significant disadvantage in being able to negotiate an end to this crisis.

Whereas prior to these events the Russians were rather content to consider themselves “just another European country,” they have now remembered that they are a distinct civilization, with different civilizational roots (Byzantium rather than Rome) -- one that has been subject to concerted western efforts to destroy it once or twice a century, be it by Sweden, Poland, France, Germany, or some combination of the above. This has conditioned the Russian character in a specific set of ways which, if not adequately understood, is likely to lead to disaster for Europe and the world.

Lest you think that Byzantium is some minor cultural influence on Russia, it is, in fact, rather key. Byzantine cultural influences, which came along with Orthodox Christianity, first through Crimea (the birthplace of Christianity in Russia), then through the Russian capital Kiev (the same Kiev that is now the capital of Ukraine), allowed Russia to leapfrog across a millennium or so of cultural development. Such influences include the opaque and ponderously bureaucratic nature of Russian governance, which the westerners, who love transparency (if only in others) find so unnerving, along with many other things. Russians sometimes like to call Moscow the Third Rome -- third after Rome itself and Constantinople -- and this is not an entirely empty claim. But this is not to say that Russian civilization is derivative; yes, it has managed to absorb the entire classical heritage, viewed through a distinctly eastern lens, but its vast northern environment has transformed that heritage into something radically different.

Since this subject is of overwhelming complexity, I will focus on just four factors, which I find essential for understanding the transformation we are currently witnessing: