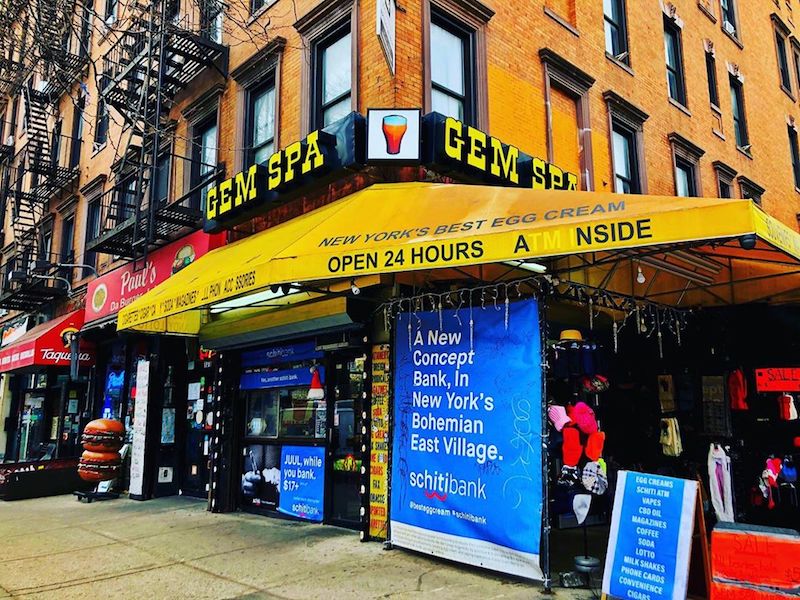 A legit New York egg cream contains neither eggs nor cream. It’s a fountain drink consisting of carbonated water, milk (animal or plant-based), and flavored syrup. In its optimal form, your egg cream will be 3/4 liquid at the bottom of the glass -- topped with a foamy head.

During my early years, my maternal grandfather lived one flight down from my family in the five-floor walk-up we all called home. Back then, Grandpa shared an apartment with his son -- my uncle -- who recently implored me to tackle a “lighter” subject in my writing. This one is for him.

Anyway, Grandpa used a cane after recovering from a broken hip but that didn’t stop him from strolling each night to a newsstand to get the New York Daily News “Night Owl.” (Up until 1981, the Daily News published both morning and night editions.)

Grandpa would stand around and wait with a bunch of other men in his age range (mid 60s to mid 70s) for the evening delivery. They’d meet early to talk amongst themselves and settle the world’s problems… one weeknight at a time.

Three unsatisfying theories exist as to how this beverage ended up with its inaccurate name. The first is class-related. In the late 19th century, there was a popular but pricey drink called “egg cream” -- chocolate syrup, cream, and raw eggs mixed into soda water. A more affordable version -- without the costly eggs or cream -- was created but still marketed as an egg cream. For obvious economic reasons, this variation endured.

The other two theories are more linguistic in nature:

On occasion, Grandpa would invite me along with him on his nocturnal walk -- and I’d always go. His friends would each gave me a quarter while Grandpa treated me to a freshly-made legit egg cream from a legit soda fountain. The old guy summits intrigued me but I couldn’t really make head or tail of their conversations. So, I’d sit at a legit counter on one of those old school spinning stools and focus on savoring every sip of my egg cream.

Gem Spa was a newspaper stand -- a “candy store” in NYC parlance -- on the corner of St. Mark's Place and Second Avenue. It was long trumpeted as the birthplace of the legit NYC egg cream.

In the 1950s, Gem Spa became a gathering place for beats. In the 1960s, it transformed into a hippie hangout, known for selling a wide selection of underground newspapers. The Village Voice called it the "official oasis of the East Village” in 1966. By the 1970s and 1980s, Gem Spa transformed again… into a notorious punk rock hangout. The candy store is featured on the back cover of the first album by the New York Dolls and “Gem Spa” is the name of a 1982 painting by Jean-Michel Basquiat. (An older version of me may or may not have occasionally patronized this disreputable establishment.)

Anyway, Gem Spa more recently fell upon hard times with the decline of newspapers and magazines. Next, the iconic store lost 80 percent of its revenue when the owners could not maintain their lottery and cigarette licenses. Then along came Covid-19 and the quarantine… and that's all she wrote. Gem Spa was shuttered in May 2020 (but you can still visit their online store).

When the Daily News delivery truck would turn the corner at 7:15 p.m., all conversation between Grandpa and his cohorts would come to an instantaneous halt. For them, it was time to plunk down their hard-earned dime and head directly home to read the Night Owl -- from cover to cover. I can’t tell you for certain what my Irish-born Grandpa’s take was on the news of the day but I do recall he’d often scan the headlines and remark to me: “It's your country. You can keep it.”

Please join me in raising a frothy, legit egg cream to both Gem Spa and my grandfather. May these legends live on, in one form or another.