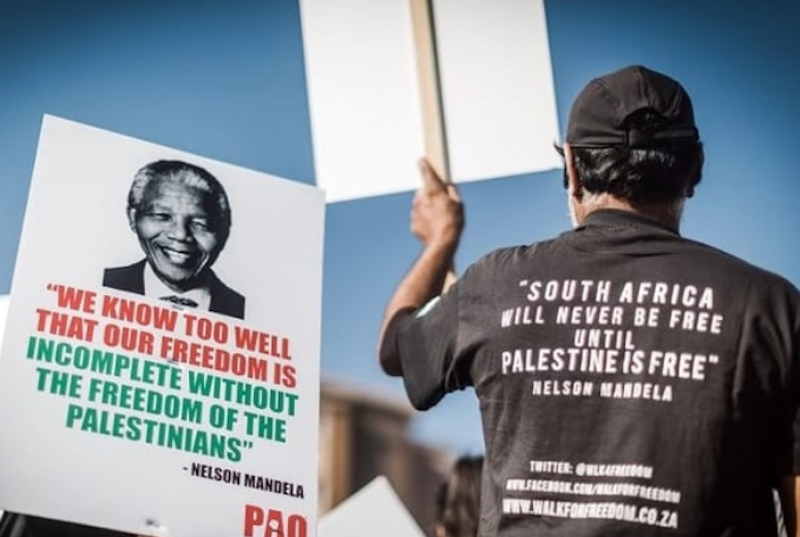 A pro-Palestine rally in South Africa. (Photo: Twitter, via MEMO)

The decision by the African Union Commission, on July 22, to grant Israel observer status membership in the AU was the culmination of years of relentless Israeli efforts aimed at co-opting Africa’s largest political institution.

Why is Israel so keen on penetrating Africa? What made African countries finally succumb to Israeli pressure and lobbying?

To answer the above questions, one has to appreciate the new Great Game underway in many parts of the world, especially in Africa, which has always been significant to Israel’s geopolitical designs. Starting in the early 1950s to the mid-70s, Israel’s Africa network was in constant expansion. The 1973 war, however, brought that affinity to an abrupt end.

Ghana, in West Africa, officially recognized Israel in 1956, just eight years after Israel was established atop the ruins of historic Palestine. What seemed like an odd decision at the time -- considering Africa’s history of western colonialism and anti-colonial struggles -- ushered in a new era of African-Israeli relations. By the early 1970s, Israel had established a strong position for itself on the continent. On the eve of the 1973 Israeli-Arab war, Israel had full diplomatic ties with 33 African countries.

“The October War,” however, presented many African countries with a stark choice: siding with Israel -- a country born out of Western colonial intrigues -- or the Arabs, who are connected to Africa through historical, political, economic, cultural and religious bonds. Most African countries opted for the latter choice. One after the other, African countries began severing their ties with Israel. Soon enough, no African state, other than Malawi, Lesotho and Swaziland, had official diplomatic relations with Israel.

Then, the continent’s solidarity with Palestine went even further. The Organization of African Unity -- the precursor to the African Union -- in its 12th ordinary session held in Kampala in 1975, became the first international body to recognize, on a large scale, the inherent racism in Israel’s Zionist ideology by adopting Resolution 77 (XII). This very Resolution was cited in the United Nations General Assembly Resolution 3379, adopted in November of that same year, which determined that “Zionism is a form of racism and racial discrimination”. Resolution 3379 remained in effect until it was revoked by the Assembly under intense American pressure in 1991.

Since Israel remained committed to that same Zionist, racist ideology of yesteryears, the only rational conclusion is that it was Africa, not Israel, that changed. But why?

First, the collapse of the Soviet Union. That seismic event resulted in the subsequent isolation of pro-Soviet African countries which, for years, stood as the vanguard against American, Western and, by extension, Israeli expansionism and interests on the continent.

Second, the collapse of the unified Arab front on Palestine. That front has historically served as the moral and political frame of reference for the pro-Palestine, anti-Israel sentiments in Africa. This started with the Egyptian government’s signing of the Camp David Agreement, in 1978-79 and, later, the Oslo Accords between the Palestinian leadership and Israel, in 1993.

Third, the "scramble for Africa" was renewed with a vengeance. The neocolonial return to Africa brought back many of the same usual suspects -- Western countries, which are, once more, realizing the untapped potential of Africa in terms of markets, cheap labor and resources. A driving force for Western re-involvement in Africa is the rise of China as a global superpower with keen interests in investing in Africa’s dilapidated infrastructure. Whenever economic competition is found, military hardware is sure to follow. Now several Western militaries are openly operating in Africa under various guises -- France in Mali and the Sahel region, the US’ many operations through U.S. Africa Command (AFRICOM), and others.

Tellingly, Washington does not only serve as Israel’s benefactor in Palestine and the Middle East, but worldwide as well, and Israel is willing to go to any length to exploit the massive leverage it holds over the US government. This stifling paradigm, which has been at work in the Middle East region for decades, is also at work throughout Africa. For example, last year the U.S. administration agreed to remove Sudan from the state-sponsored terror list in exchange for Khartoum’s normalization with Israel. In truth, Sudan is not the only country that understands -- and is willing to engage in -- this kind of "pragmatic" -- read under-handed -- political barter. Others also have learned to play the game well. Indeed, by voting to admit Israel to the AU, some African governments expect a return on their political investment, a return that will be exacted from Washington, not from Tel Aviv.

Unfortunately, albeit expectedly, as Africa’s normalization with Israel grew, Palestine became increasingly a marginal issue on the agendas of many African governments, who are far more invested in realpolitik -- or simply remaining on Washington’s good side -- than honoring the anti-colonial legacies of their nations.

However, there was another driving force behind Israel’s decision to "return" to Africa than just political opportunism and economic exploitation. Successive events have made it clear that Washington is retreating from the Middle East and that the region was no longer a top priority for the dwindling American empire. For the United States, China’s decisive moves to assert its power and influence in Asia are largely responsible for the American rethink. The 2012 U.S. withdrawal from Iraq, its "leadership from behind" in Libya, its non-committal policy in Syria, among others, were all indicators pointing to the inescapable fact that Israel could no longer count on the blind and unconditional American support alone. Thus, the constant search for new allies began.

For the first time in decades, Israel began confronting its prolonged isolation at the UNGA. America’s vetoes at the UN Security Council may have shielded Israel from accountability to its military occupation and war crimes; but U.S. vetoes were hardly enough to give Israel the legitimacy that it has long coveted. In a recent conversation with former UN human rights envoy, Richard Falk, the Princeton Professor Emeritus explained to me that, despite Israel’s ability to escape punishment, it is rapidly losing what he refers to as the "legitimacy war."

Palestine, according to Falk, continues to win that war, one that can only be achieved through real, grassroots global solidarity. It is precisely this factor that explains Israel’s keen interest in transferring the battlefield to Africa and other parts of the Global South.

On July 5, 2016, then Israeli Prime Minister, Benjamin Netanyahu, kick-started Israel’s own "scramble for Africa" with a visit to Kenya, which was described as historic by the Israeli media. Indeed, it was the first visit by an Israeli prime minister in the last 50 years. After spending some time in Nairobi, where he attended the Israel-Kenya Economic Forum alongside hundreds of Israeli and Kenyan business leaders, he moved on to Uganda, where he met leaders from other African countries including South Sudan, Rwanda, Ethiopia and Tanzania. Within the same month, Israel announced the renewal of diplomatic ties between Israel and Guinea.

The new Israeli strategy flowed from there. More high-level visits to Africa and triumphant announcements about new joint economic ventures and investments followed. In June 2017, Netanyahu took part in the Economic Community of West African States (ECOWAS), held in the Liberian capital, Monrovia. There, he went as far as rewriting history.

“Africa and Israel share a natural affinity,” Netanyahu claimed in his speech. “We have, in many ways, similar histories. Your nations toiled under foreign rule. You experienced horrific wars and slaughters. This is very much our history.” With these words, Netanyahu attempted, not only to hide Israel’s colonial intentions, but also rob Palestinians of their own history.

Moreover, the Israeli leader had hoped to crown his political and economic achievements with the Israel-Africa Summit, an event that was meant to officially welcome Israel, not to a specific African regional alliance, but to the whole of Africa. However, in September 2017, the organizers of the event decided to indefinitely postpone it, after it was confirmed to be taking place in Lome, capital of Togo, on October 23-27 of that same year. What was seen by Israeli leaders as a temporary setback was the result of intense, behind-the-scenes lobbying of several African and Arab countries, including South Africa and Algeria.

Ultimately, it was a mere temporary setback. The admission of Israel into the 55-member African bloc in July is considered by Israeli officials and media pundits as a major political victory, especially as Tel Aviv has been laboring to achieve this status since 2002. At the time, many obstacles stood in the way, like the strong objection raised by Libya under the leadership of Muammar Ghaddafi and the insistence of Algeria that Africa must remain committed to its anti-Zionist ideals, and so on. However, one after the other, these obstacles were removed or marginalized.

In a recent statement, Israel’s new Foreign Minister, Yair Lapid, celebrated Israel’s Africa membership as an “important part of strengthening the fabric of Israel’s foreign relations”. According to Lapid, the exclusion of Israel from the AU was an “anomaly that existed for almost two decades”. Of course, not all African countries agree with Lapid’s convenient logic.

According to TRT news, citing Algerian media, 17 African countries, including Zimbabwe, Algeria and Liberia, have objected to Israel’s admission to the Union. In a separate statement, South Africa expressed outrage at the decision, describing the “unjust and unwarranted decision of the AU Commission to grant Israel observer status in the African Union” as “appalling.” For his part, Algerian Foreign Minister, Ramtane Lamamra, said that his country will “not stand idly by in front of this step taken by Israel and the African Union without consulting the member states.”

Despite Israel’s sense of triumphalism, it seems that the fight for Africa is still raging, a battle of politics, ideology and economic interests that is likely to continue unabated for years to come. However, for Palestinians and their supporters to have a chance at winning this battle, they must understand the nature of the Israeli strategy through which Israel depicts itself to various African countries as the savior, bestowing favors and introducing new technologies to combat real, tangible problems. Being more technologically advanced as compared to many African countries, Israel is able to offer its superior "security," IT and irrigation technologies to African states in exchange for diplomatic ties, support at the UNGA and lucrative investments.

While such a task is daunting, it is also promising, as Palestinians now have the opportunity to build bridges of support and mutual solidarity in Africa through direct contacts, where they serve as their own ambassadors. Obviously, Palestine has much to gain, but also much to offer Africa. Palestinian doctors, engineers, civil defense and frontline workers, educationists, intellectuals and artists are some of the most highly qualified and accomplished in the Middle East. True, they have much to learn from their African peers, but also have much to give.

Unlike persisting stereotypes, many African universities, organizations and cultural centers serve as vibrant intellectual hubs. African thinkers, philosophers, writers, journalists, artists and athletes are some of the most articulate, empowered and accomplished in the world. Any pro-Palestine strategy in Africa should keep these African treasures in mind as a way of engaging, not only with individuals but with whole societies.

Israeli media reported extensively and proudly about Israel’s admission to the AU. The celebrations, however, might also be premature, for Africa is not a group of self-seeking leaders bestowing political favors in exchange for meager returns. Africa is also the heart of the most powerful anti-colonial trends the world has ever known. A continent of this size, complexity, and proud history cannot be written off as if a mere ‘prize’ to be won or lost by Israel and its neocolonial friends.