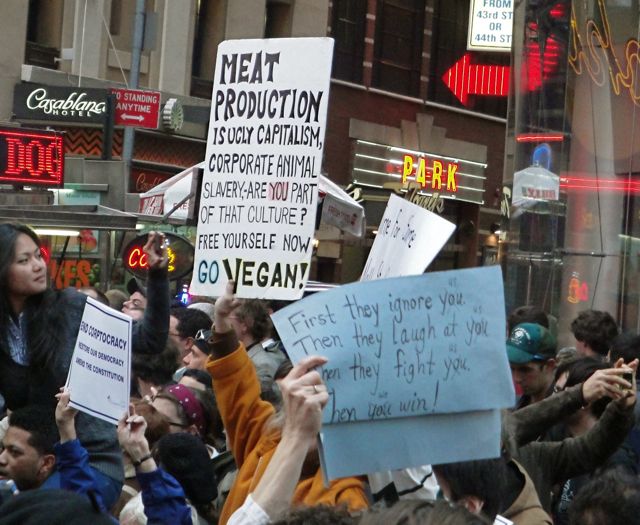 "There is no way to overstate the magnitude of the collective spiritual transformation that will occur when we shift from food of violent oppression to food of gentleness and compassion." - Will Tuttle

In a recent article, my colleague Robert Jensen describes the “obvious” problem: “We face multiple, cascading ecological crises that should spur us to rethink our economy, politics, and society, but the existing rules rule out such thinking. If we can’t transcend these intellectual limits, it is not clear that an ongoing large-scale human presence on the earth will be possible.”

As they say in South Florida: BINGO

For example, the “intellectual limits” and “existing rules” within the post-Sandy discussions left us choosing between two candidates who dared not utter the words “climate change” during televised debates for fear of angering their corporate owners.

Such limits and rules, even as gasoline lines stretched for blocks, also excluded a meaningful conversation about our lethal love affair with the internal combustion engine -- and the petroleum that fuels it (article coming soon on this).

Then, of course, we have the unyielding intellectual limits on display when acknowledging the number one cause of human-created greenhouse gases loses out to serving factory-farmed animals to those impacted by a symptom of climate change.

In my efforts to take advantage of this powerful teaching moment, I’m told (among other things) to not “force” veganism on other people.

I’m told that it’s “more important to get people fed with what's available than to make things about diet, health, global warming, or whatever.”

I’m told there shouldn’t be “any concern about diet politics in the day-to-day efforts” and that it’s important we not “adopt dietary codes in social movements.”

Please allow me to yet again address this army of straw men...

Deceptively labeling my points as “diet politics” or “dietary codes” doesn’t change the fact that what I’m obviously doing is suggesting that those who identify as open-minded activists recognize some documented connections and act accordingly.

The No. 1 cause of events like Hurricane Sandy may be sitting on the plates given to those most impacted but, rather than embracing change, activists waste energy portraying my words as “forcing” some “code” on unsuspecting people who just need to be fed and can’t be concerned with “diet politics.”

Not only are they underestimating the intelligence and curiosity of those they’re helping while ignoring the primary cause of the crisis, activists are also pretending that “codes” don’t exist within social movements.

Is a radical kitchen “imposing a code” when insisting on actions like recycling, composting, etc. or is the value of these efforts clear and thus, no further discussion truly needed?

Is it disrespectful when new forms of communication (hands signals, anyone?) usurp more familiar methods? Is this an elite “transmission code” being “forced” upon unprepared people?

Is it a “code” when activists expect their comrades to eschew racist-sexist-homophobic language?

Do I even need to continue on this point?

Beyond tofu recipes
My articles and posts about the factory farming/Sandy connections are not about codes, politics, or force. As stated above, we have an opening here -- a chance to begin a crucial transition to a lifestyle that will help cultivate a much-needed global shift.

Going vegan is a lot more than altering your diet. It’s even a lot more than the climate change connection. This choice is also about (among many other things): workplace justice, torture, health care, deforestation, overfishing, poverty, habitat loss, GMOs, ocean dead zones, corporate welfare, Wall Street profits, and so-called free trade agreements (read up on the TPP and spread the word).

In addition, when properly practiced, the plant-based life is the healthier choice -- and without a single utterance of the word "prevention" in Obama’s health care giveaway to big business, it's crucial for all of us to take some responsibility for our own health.

P.S. Veganism is the ethical choice, too...

I could fill this article with heinous details about fur farms, vivisection labs, circuses, zoos, veal crates, and so much more. For now, I'll simply offer one timely example:

If all our grievances are connected, comrades, where and how do those turkeys fit in?

To any activist who incorrectly characterizes the vegan lifestyle as elitist, I’d urge you to examine how your food choices negatively impact the working class you wish to help. Inside the slaughterhouses, the animals are not the only ones suffering.

The meat industry, along with its low wages, long hours, and dehumanizing work, has the highest job-related injury rate and by far the highest rate of serious injury -- and at least half the workers are women.

Of course, with many undocumented immigrants and poor Americans working such jobs, it remains unknown how many injuries go unreported.

I could go on (and on) to easily counter every rejoinder I’ve faced but, instead, I’ll clarify my stance: I’m not implying that major cultural changes are simple or can happen overnight or must be about purity or litmus tests but, as anyone willing to accept reality knows, we’re past the point of no return.

This isn’t easy to hear -- let alone hear over and over again -- so let me close with something aimed at the one retort I haven’t yet addressed, the one that typically goes a little something like: “This sanctimonious zeal by some vegans has been one of the main reasons why I've never become a vegan.”

Such an emotional and irrational reaction could be easily dismissed, of course. I could simply point how, by the same logic (sic), after dealing with an overzealous anti-war activist, we should all rush out and enlist.

However, there is a very useful and important point to be made here: Just because some passionate vegan activists are perceived as annoying doesn’t mean all vegans are and, more significantly, it doesn’t mean we’re wrong.

The only “code” being imposed here is that of Hurricane Sandy: Adapt or perish.

(In the meantime, to help with Occupy Sandy Recovery, click here.)

Mickey Z. is the author of 11 books, most recently the novel Darker Shade of Green.

Our Lunch Date With Sandy by Mickey Z. CC BY-SA 4.0