One Year of COVID: The Downside of Masks (and Lockdowns) — Mickey Z. 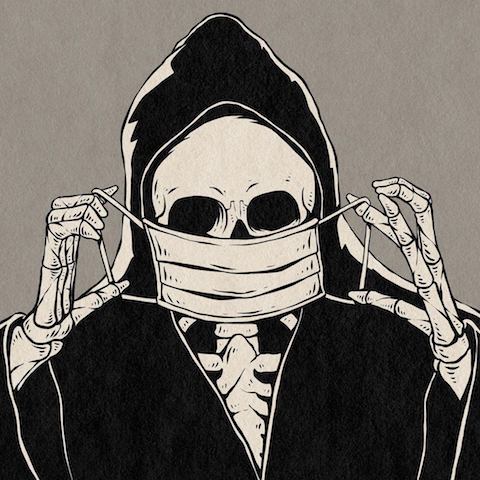 In the early days of “quarantine,” many of us found some solace in watching nature “take back” areas suddenly devoid of humans. It feels rather quaint and naive now, huh? Not only have the lockdowns gone on to defy all logic, but the natural world has become yet another casualty of the patchwork frenzy (just ask the peregrine falcons, for example).

Based on current data, 376 million face masks could be entering landfills every single month with 1.5 billion masks polluting the oceans since the lockdowns started. (Our oceans were already choking — with every square mile hosting some 16,000 pieces of floating plastic.) These discarded single-use products are made of plastics like polypropylene, polyethylene, and vinyl. Such petrochemicals will linger as dangerous and lethal micro-plastics into rivers, meadows, and other delicate eco-systems (like our own lungs). “With a lifespan of 450 years,” explains Éric Pauget, a member of the French National Assembly, “these masks are an ecological time bomb given their lasting environmental consequences for our planet.” Take a few minutes to type “mask pollution” into your nearest search engine and then get back to me about the officially stated importance of “protecting as many lives as possible.” 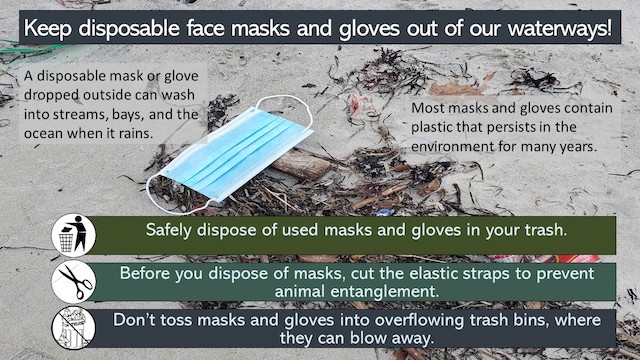 This line of thought brings me back to an article I wrote earlier this year. In that piece, I explained: As you read these words, the global lockdowns are exacting a terrible toll on the Third World, for example:

According to a study published in the Nature Research Journal, by 2022, COVID-19 could result in:

Meanwhile, in Japan, suicide claimed more lives in October 2020 than COVID-19 had over the entire year to that point. While suicide rates had been falling in Japan for the past ten years, the pandemic and global lockdown-induced economic fallout have reversed that trend in a frightening way. As is often the case, women are paying the highest price.

In October 2020, suicides among Japanese women increased almost 83 percent compared to October 2019 (male suicides rose about 22 percent over the same time period). Women tend to be the nation’s part-time workers, service industry workers, and lowest-rung workers. Needless to say, they also do the bulk of domestic work. This combination of factors has been catastrophic for females in Japan. Globally, realities like this have added up to 27 percent of women reporting “increased challenges with mental health during the pandemic” (compared to 10 percent of men). 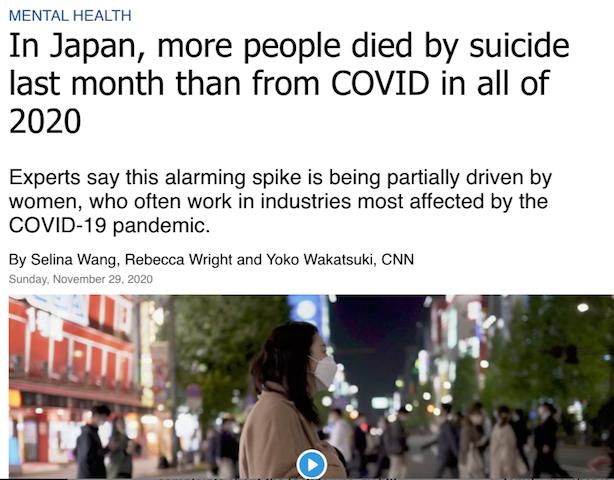 I was fully on board with the urgency last March. We were in an unusual situation so it made sense (at least to me) that it would require an unusual response. I remained mostly onboard throughout the summer. By fall, more information was available and I felt myself challenging some of the conventional wisdom. Now, as we hit the one-year mark, it’s become exceedingly clear that (gulp) Trump may have been (accidentally) onto something when he opined nearly 12 months ago: “We can't let the cure be worse than the problem.”

Before you start firing off misguided emails in my direction, please allow me to elaborate. Last year, I truly resonated with the sentiment that we must do whatever we can to protect the most vulnerable among us. Why should anyone’s family member be left unprotected because of complaints about the lockdowns, right? But, what if that vulnerable family member is, for example, a suicidal woman in Japan? What if she is a 13-year-old girl no longer safeguarded from genital mutilation? Or someone who has lost their home or business and is now living on the street?

What if that vulnerable family member is any one of the millions of children doomed to being illiterate, physically stunted, and/or forced into child marriage or trafficking? While we squabble over mask rules in Home Depot, who is looking out for the 10,000 additional children who are dying each month from hunger due to the lockdowns?

On a heart level, I truly line up with the mentality of “better safe than sorry.” But we are being neither safe nor sorry. In the “early days” of Covid, pariah-turned-hero-turned-back-to-pariah New York governor Andrew Cuomo tweeted: 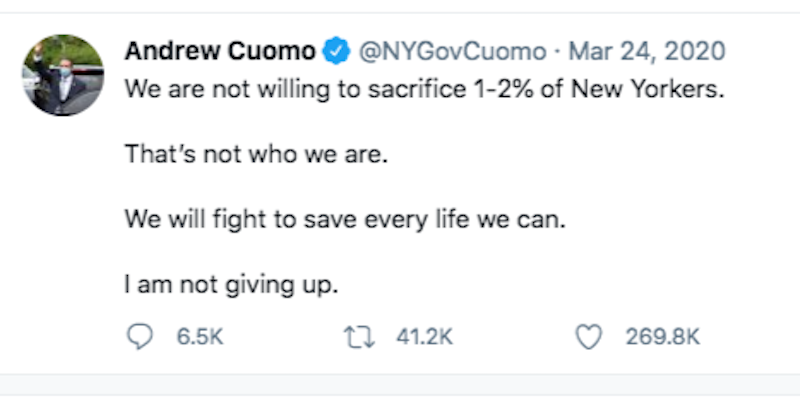 Sounds noble but since when is any aspect of our culture designed to adhere to this sentiment? If our standing goal was to never sacrifice “1-2% of New Yorkers,” we would (for example) lower the legal speed limit to maybe 15 MPH. The state would prohibit corporations from marketing any product with even a 2 percent chance of hurting a consumer. Gun sales? Violent cops walking free? Vaccines approved without long-term testing? Junk food available on every corner? “That’s not who we are.” Banish it all, ASAP!

“We will fight to save every life we can.” Okay, let’s do away with tax breaks for the rich. Use that money to instead fund domestic violence shelters and suicide hotlines. Decree that no medical professional or emergency room can ever turn away a single patient. Find safe housing for every homeless person. Ban cigarettes and alcohol. No flight can take off until every inch of every plane has been quadruple-checked for hours.  “I am not giving up.” Screw it, every New Yorker gets a bulletproof vest and a monthly check for $5000 to stay home if they feel safer there.

If I sound sarcastic, that’s not my goal. I’m merely pointing out that, long before the pandemic, we collectively created a way of life that is unfair, dangerous, violent, and deadly in more ways than we can possibly name. All the best intentions in the world can’t build a protective shield around the beings we love. And, let’s be radically honest here, no one’s intentions always fall into the “best” category. We cut corners, take shortcuts, exploit, and — knowingly or unknowingly, directly or indirectly — put others at risk. On a corporate and government level, the scale of this risk is breathtaking.

“We will fight to save every life we can” is useful rhetoric during a hostage crisis or when some kids are trapped in a cave. If it were truly our collective goal, our world would look far, far different than it does today. Our society is one based on callous, self-serving trade-offs. Small groups of homo sapiens get to thrive at the expense of all the other sentient beings. For a year, most of us have been stuck at home, lacking social contact, and praying for a meager stimulus check. Meanwhile, America’s 614 billionaires grew their net worth by a collective $931 billion since the pandemic started. “That’s not who we are?” Au contraire, it is precisely who we are and have been for quite a while. 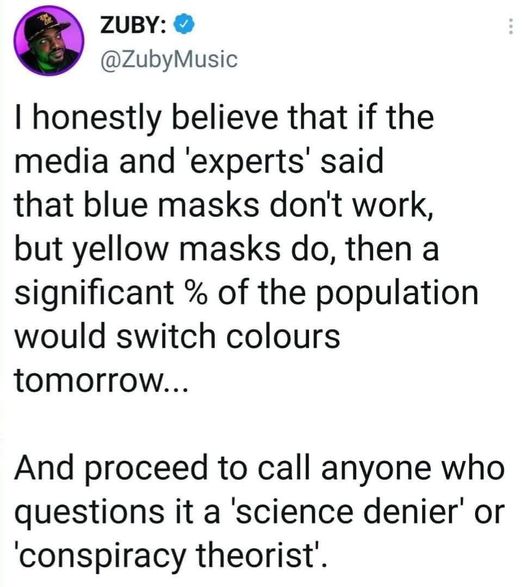 In his 1964 "Letter from Mecca," Malcolm X wrote: “You may be shocked by these words coming from me. But what I have seen and experienced has forced me to rearrange much of my thought-patterns previously held, and to toss aside some of my previous conclusions. This was not too difficult for me. Despite my firm convictions, I have always been a man who tries to face facts, and to accept the reality of life as new experience and new knowledge unfolds it. I have always kept an open mind, which is necessary to the flexibility that must go hand in hand with every form of intelligent search for truth.”

I've tried to live my life along similar lines and with similar standards. That's why, when “coronavirus” first entered our lexicon and some folks declared that the “cure” would be worse than the problem, I reserved judgment. I watched, I asked questions, and I waited for more evidence to be available while I lived as cautiously as possible (and still mostly do). As we enter year two of this fiasco, there are far fewer reasons to withhold critical analysis. Simply put, the varied and ever-increasing forms of collateral damage are showing us that both the “cure” and the “problem” are killing us — but the powers-that-be have no intention of recalibrating their agenda. We’re gonna need a lot more than banging pots and pans to get through this, my friends.