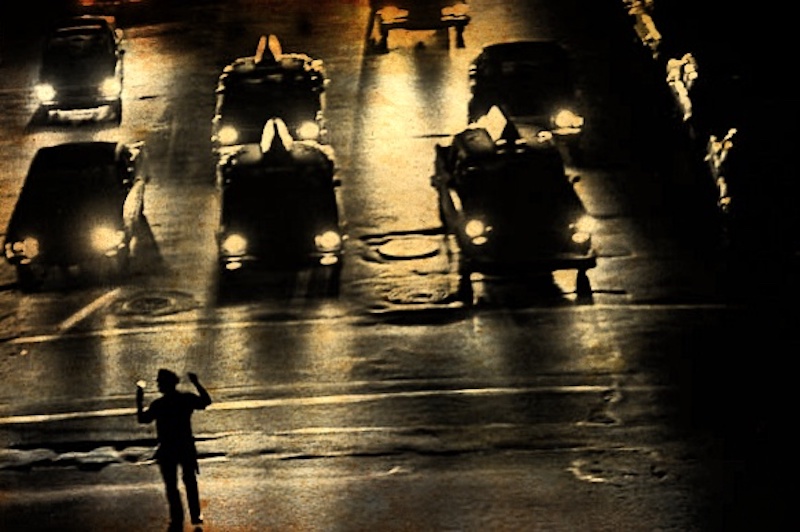 I was working a summer job at Gimbel’s during the July 13, 1977 blackout. Coincidentally, it occurred on inventory night, the one day of the year when overtime was mandatory. I dragged my tired body all over the building, counting things: bed sheets, pots, rugs, footballs, books, shirts, spoons, shoes, and more things I can’t remember

If Kafka worked with me at Gimbel’s, he’d have another novel.

I managed to get myself released before the others (I’ve always been good at stuff like that). Miraculously, this allowed me to get off the old RR train before the blackout hit. As I stepped off the last step down from the Ditmars Boulevard station, the lights went out. For a millisecond, it seemed my foot did it. Then I realized what had happened and smiled. I missed getting stuck on the train by mere seconds.

I got home and everyone was out on the street. An older dude who lived across the street was drunk, but that didn’t stop him from trying to direct traffic. Being the analytical sort, I figured that the power would be restored overnight and I’d still have to get up for work early the next day… so I didn’t hang out to take in the blackout madness. Instead, I ate and hit the sack at my regular time.

Power was restored but I still didn’t have to go to work the next day. I spent that day kicking myself for being such a practical teenager and missing out on all the blackout fun because I was worried about getting enough sleep. (I have not changed much in that regard.)

Almost exactly 29 years later -- on July 17, 2006 -- I slept on my fire escape. The sight of yours truly three flights up sporting boxer shorts and a death grip on the bars came courtesy of Con Edison (with a nod to Mayor Michael Bloomberg).

The lights first dimmed earlier that evening -- smack dab in the middle of a classic NYC heat wave. Over the next few days, as Con Ed dangerously underestimated the number of people affected, my neighborhood of Astoria joined Long Island City, Sunnyside, and Woodside in blackout mode. Veteran New Yorkers know the drill: flashlights, candles, food rotting in the fridge, neighbors sitting on the stoop swapping stories. But this was more than just supply and demand.

According to the New York Times, “the electrical network for the area of Queens where 100,000 people endured a lengthy blackout had the most failures of any of the 57 underground networks in New York City for the last two years.” Those failures numbered 71 in 2005 and 60 in 2004. By comparison, Manhattan’s Upper East Side experienced 40 failures in 2005.

It isn’t hard to imagine Bloomberg reacting with a little more fervor if zip code 10021 lost its juice. Astoria, on the other hand, was left literally and figuratively in the dark. Theories abounded but no one really knew what was going on or when it would end. Fire engine sirens sounded all through the night, darkened traffic lights made every intersection an adventure, manhole covers popped like champagne corks, but most disturbing were the smoking and burning power lines. This I had never seen. The thick black cables strung from wooden pole to wooden pole smoldered, smoked, and burst into flames as frightened residents looked on. News outlets, lulled by Con Ed’s undercount, focused instead on those without power due to a storm in well-heeled Westchester.

The Times also explained that several failures in the network “involved components that were 30 to 60 years old … One cable, which failed six times last year, had a 67-year-old component.” This got me thinking about Astoria’s sudden influx of yuppies.

Astoria’s gentrification has resulted in the tearing down of houses to be replaced by small apartment buildings. Thus, a slice of real estate that may have once housed an aging widow is now home for a dozen or so of the upwardly mobile…each with two air conditioners and countless electronic gadgets. It doesn’t require genius to imagine this trend impacting a 67-year-old component.

In between the two above stories -- on Aug. 14, 2003 -- we endured the Eastern seaboard’s most recent major blackout. When the blackout of '03 dimmed the mighty skyline, I could suddenly see stars by looking up… zillions of them blinking at me from beyond the unlit skyscrapers. Traffic lights were out of commission, but to the southeast, Mars provided the only red light we really needed.

By coincidence, our crimson neighbor was closer to Earth than ever before and the power outage gave us Easterners an excellent view of Mars's southern hemisphere from a mere 34.6 million miles away.

Still, even with the stars twinkling above and little green Martians close enough to reach out and shake my hand, it was when I returned my gaze back down to the streets that I truly couldn't believe my eyes. That clammy evening, one could witness a sight even more uncommon than any celestial spectacle.

Across the darkened city, Big Apple denizens stopped hustling. They sat still and talked to each other. No computers, no televisions, practically no telephones… just face-to-face communication (even if it was too dark at times to actually see faces).

Huddled around flickering candles and eating food before it could spoil, longtime Astoria neighbors finally introduced themselves, discovering similarities and answering the question of the day: "Where were you when the lights went out?"

This unforeseen solidarity was accomplished without the assistance of e-mails, texts, or tweets. Money didn't change hands, no cell phone radiation was emitted, no air was conditioned. Under a sky full of stars and a visiting red space-mate, it was possible to encounter the sort of life we may have evolved to live back in the "caveman" days.

Our modern caves, the subterranean tunnels of transportation known as "the subway," were empty but the concrete jungle above them might as well have been the Savannah. The tribes of Astoria sat around fires -- sharing food and communal stories. Some even beat on drums.

In times like this, it's easier to appreciate that we each possess a physiology that evolved to negotiate the Stone Age. Here lies the rub: we live in the Space Age. We are urban cavemen... overmatched in our daily crusade to navigate an artificial reality because we’ve lost contact with our primal instincts.

For one thing, we likely didn't evolve to be surrounded by this many people. Thus, in our futile search for a manageable tribe, we preserve our attention for a handful of fellow humans. What's vexing is how to deal with the millions not in our tribe... but still in our face. Subsequently, we inventive mortals have cultivated the ability to hastily disregard non-tribe members.

"In the busy streets, you develop human traffic skills of amazing dexterity," writes zoologist Desmond Morris. "In crowded buses, trains, and elevators, you acquire a blank stare. You have eyes only for those you know. This enables you to enjoy the varied delights of the big city while mentally re-creating a personal tribe existence."

But what happens when those streets aren't busy... like, say, during the worst blackout in U.S. history? We may have eyes only for those we know, but what about when it's too shadowy to tell the difference?

With our vision impaired enough to create the illusion of intimacy and our vaunted technology no longer at our overworked fingertips, we are gifted with a taste of a potentially different culture. Sure, things returned to "normal" when power was restored, but the experience left some of us wondering just what "normal" means.

The last time Mars got as close to Earth as it was in 2003 was some 60,000 years ago... an age when stars were easy to find and one could cause a blackout simply by dousing the fire.

The extraterrestrial lady in red will once again be 34,646,418.5 miles away in a mere 284 years. I wonder what kind of earthly culture will be there to greet her.

On the 40th anniversary of the 1977 blackout by Mickey Z. is licensed under a Creative Commons Attribution-ShareAlike 4.0 International License.
Based on a work at http://worldnewstrust.com/on-the-40th-anniversary-of-the-1977-blackout-mickey-z.