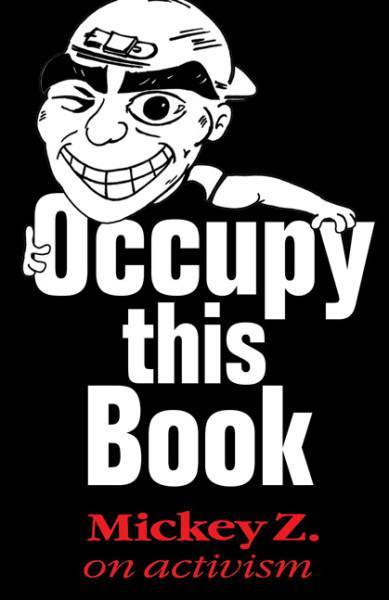 "It’s a pleasure to be in the struggle with Mickey Z."

- Cindy Sheehan, from her foreword to the book

To follow is an excerpt from Occupy this Book, called “Everyday life in a corporate propaganda state.”

The American corporate media had to pull out its entire arsenal to deal with Occupy Wall Street (OWS). In roughly this order, the media works: First it ignores an event, then it treats it as a curiosity, and then it pulls out the big guns. Occupiers were portrayed as slumming rich kids, drug addicts, rapists, selfish, lazy, unwashed, murderers, and inevitably, the ultimate insult: terrorists.

Most of the time, the anti-OWS media’s favorite tactic was a news blackout and then the derisive obituary thrown in to make everyone think it was over.

Reminder: The pervasive and willful distribution of misinformation is typical of life within a society dominated by a corporate-run press.

Whether you label them liberal or conservative, most major media outlets are large corporations owned by or aligned with even larger corporations, and they share a common strategy: selling a product (an affluent audience) to a given market (advertisers).

Therefore, we shouldn’t find it too shocking that the image of the world being presented by a corporate-run press very much reflects the biased interests of the elite players involved in this sordid little love triangle.

That’s why every major daily newspaper has a business section but not a labor section. Why at least once a week, these newspapers run an automobile section but no bicycle section.

This is why when the Dow Jones Industrial Average drops, it makes headlines. Yet, if the global extinction rate rises, it’s doubtful whether anyone covers that story. If they do, it probably won’t make the papers except as a sidebar item buried in the back pages as a curiosity for readers’ amusement.

Were you to create a blueprint for an apparatus that utterly erased critical thinking, you could make none more efficient than the American corporate media. All of it: there is no reason to assume that only Fox News is shaping how we are supposed to think.

There we find another major component of the free press illusion: the notion that some media outlets are more liberal while others are more right wing. Believing in this myth will limit your ability to debate what is real and what is falsely labeled as the “news.”

Reality: The media is as liberal or conservative as the corporations that own it.

I arrived at the gym where I work on July 11, 2012, where one of the ubiquitous television screens was streaming the news (sic): “Occupy Wall Street DNA Linked to 2004 Murder.”

A woman working out and unaware of my connection to OWS instantly swallowed the hype. Then she began a conversation about it with me, of all people. She had believed the whole story. You’ve got to believe that these opportunities are given to you for a reason, so as calmly as I could, I said:

"It sounds like an unsubstantiated rumor being used to smear OWS. Isn't it funny how when a cop shoots an unarmed person or a U.S. Predator drone kills an entire family in Pakistan, we're cautioned to wait until all the facts are in before making a judgment? But when it's Occupy, they run full speed ahead with a blatant rumor. I promise you, this will be recanted before the end of the day."

I was not surprised when this is what happened next, in the news cycle:

That morning, a New York Post story opened with this paragraph: "The unsolved murder of a Juilliard student eight years ago took an incredible turn yesterday as investigators matched DNA from the crime scene to a sample collected from an Occupy Wall Street protest in Brooklyn, sources said."

Eleven paragraphs into the article, the Post got around to mentioning the vast "number of persons the OWS sample could have come from."

(You have to now ask yourself, when did it become standard operating policy for the Blue Bloc to collect DNA samples from scenes of civil disobedience and promptly release alleged lab matches to the media?)

By midday on that same July 11, the New York Times was reporting that the DNA match "was the result of a laboratory error at the city Medical Examiner's office."

The all-too-predictable retraction arrived way too late. The smear had already taken hold -- as it was designed to do.

No big surprise when I saw the same woman at the gym two days later and asked her if she had seen the retraction. She said she hadn’t (insert sad trombone here).

The bogus Occupy-DNA connection gives the huddled masses yet another reason to ignore the truth about dissent. They remain blissfully unconcerned about what is really going on: the endless, fully substantiated and admitted mass murders performed in their name.

Sure, the death of Sarah Fox. the Juilliard student, was a tragedy but why aren't more of us up in arms over the daily, taxpayer-subsidized murders committed by the U.S. military and law enforcement agents all over the globe? (Obama has a kill list, which includes American citizens, for crissake.)

Why aren't there sensationalist headlines about the animals murdered in labs and slaughterhouses and... well, just about everywhere?

Why aren't we checking the DNA of those responsible for the entire ecosystems wiped out by ocean bottom-trawling or forest clear-cutting or corporate pollution or suburban sprawl or fracking or offshore drilling or... well, just about everything?

I'd suggest a two-part answer to these and similar queries:

We can't and shouldn't expect anything else from the disinformation and repression wings of the 1%. It's in their cultural DNA.

For the rest of the 99% living in a police/propaganda state, our cultural deoxyribonucleic acid guides us onto a path of passive consumption.

Genetic DNA can often be tough to challenge, but cultural DNA can be redesigned. In fact, our cultural DNA can be reinvented at any time, as often as we choose. You don't need a college degree, a big bank account, or permission from the powers-that-be to make the choice to see with new eyes.

Mic Check: By contemplating what is possible, we break free of what is accepted.

Instead of wasting our time and resources trying to change the essentially unchangeable police and press, let's work to detach ourselves from the cultural DNA destroying us (and all life) and create spaces in which all of us can rediscover the subversive pleasure of independent thought and collective action.