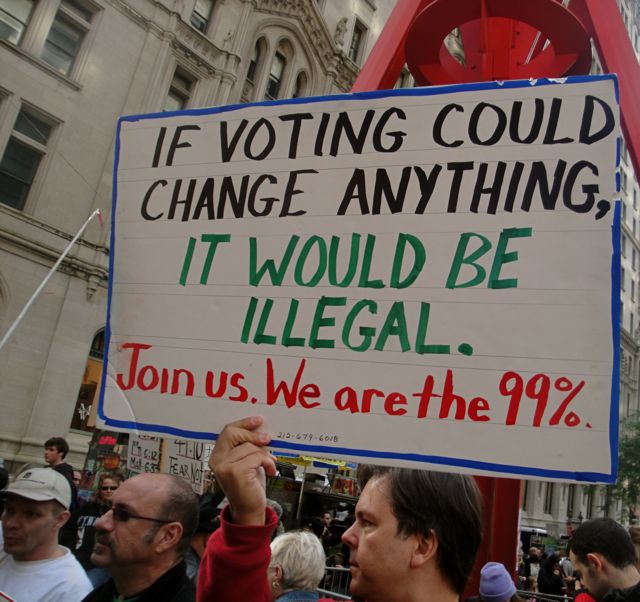 "I think voting is the opium of the masses in this country. Every four years you deaden the pain." --Emma Goldman

You can add this misguided query to the growing list, along with: Where are their demands? Why aren't there any leaders? Blah, blah, blah...

To address the election-year silliness, please allow me to flashback to August 2004 when the Republican National Convention was held in my hometown: New York City

At the time, I questioned the Anybody-But-Bush strategy of only protesting the Republicans when the Democrats were (and remain) barely distinguishable and equally culpable.

Over and over, I wondered: "Where was the planned-for-months-in-advance outrage at the Democratic Convention in Boston? The Hitler mustaches? The warnings about fascism? The cataloging of candidate crimes?"

I also pondered the efficacy of "anti-authority types submitting to New York's demands for polite opposition restricted to a pre-determined venue."

In another article, I explained:

"By equating U.S. military intervention with the Bush regime, the anti-war crowd is aiding and abetting this subterfuge. Anti-war doesn’t just mean anti-Bush or anti-Republican and it isn’t a useful mask to wear at an election season costume party. The label “anti-war” signifies one as being against war no matter what political party has commenced the invasion, the bombing, the sanctions, or the covert operations. Until the anti-war movement is guided by genuine anti-war sentiment, it’ll play right into the hands of the two-party (sic) game -- a game with no long term winners."

“I think it is dangerous to confuse the idea of democracy with elections. Just because you have elections doesn’t mean you’re a democratic country.” --Arundhati Roy

I addressed this issue -- in detail -- back in January and I urge you to fully read and widely share my article, "De-Occupy the Two-Party Fraud: #Vote4Me?"

In that piece, I offered a brief history of Democrats from Truman to Obama and specifically broke down how and why the U.S. electoral system is rigged -- before ending with this flourish:

What happened in 2008 is an excellent illustration of how system handles dissent: A black face, a soothing voice, and a vague message of change -- all designed to keep rabble pacified without changing anything at all.

Best news from 2011: The rabble is no longer pacified.

In 2012: Let's recognize that choosing to #Occupy is more powerful than choosing to vote. Let's Mic Check the bogus debates. Let's expose and reject the Lesser Evil ploy. Let's make it clear that we're on to their bullshit and we're ready to protect the future we share with all life on the planet.

“Anarchists know that a long period of education must precede any great fundamental change in society, hence they do not believe in vote begging, nor political campaigns, but rather in the development of self-thinking individuals.” --Lucy Parsons

Seven months after my election year article was first posted, I'm thrilled to witness how OWS has not resorted to the dead end of trying to "change the system from within" and is instead scheming to occupy both the Republican and Democratic conventions. (insert sigh of relief here)

Here's a list of just some of the planned Occupy and Occupy-friendly events:

Also: The Coalition to March on Wall Street South is hoping to unite a broad group of social justice, labor, and community organizations to coordinate demonstrations during the Democratic National Convention in Charlotte, NC from Sept. 1-6, 2012.

If it still doesn't seem abundantly clear why both conventions -- and both wings of the single corporate party -- must be occupied, remember that when Barack Obama was inaugurated in January 2009, he clearly and firmly announced to the planet:

"We will not apologize for our way of life, nor will we waver in its defense."

The next time someone asks why OWS isn't running candidates or explains (sic) how Romney is so much worse than Obama, gently remind them:

Our beloved way of life was built on a nearly exterminated indigenous population, an African slave trade, and all those killed in places like Hiroshima, Nagasaki, Southeast Asia, Central America, Middle East, etc. etc.

Our way of life was created on stolen land, using stolen oil.

Our way of life was and is built on terror and is maintained by terror -- the terror of cops, prisons, the military, and the psychological terror of propaganda.

With the point of no return fading in the rearview mirror (or at least obscured by an Hummer), the time is long overdue for all of us to recognize how "our way of life" makes us the real terrorists.

The precarious state of things on Planet Earth is not some preordained theology or an unstoppable force of nature. We're in this mess thanks to human decisions. If different decisions had been made in the past, different outcomes would've likely occurred.

If different decisions are made and different actions are taken -- starting right now -- perhaps different outcomes can still transpire.

Here's one more thing I wrote during the 2004 presidential election sham:

"Activism is not about hating one person or one party ... it is holistic. Even in the face of urgent issues, dissent is a marathon -- not a sprint."

Thanks to Occupy, the real race is finally being run.

(Special thanks to John Penley for suggesting this article and providing info on the events and again, for context, please read and share: De-Occupy the Two-Party Fraud: #Vote4Me)