Occupy For Sharks And Oceans And All Those Who Defend Them | Mickey Z. 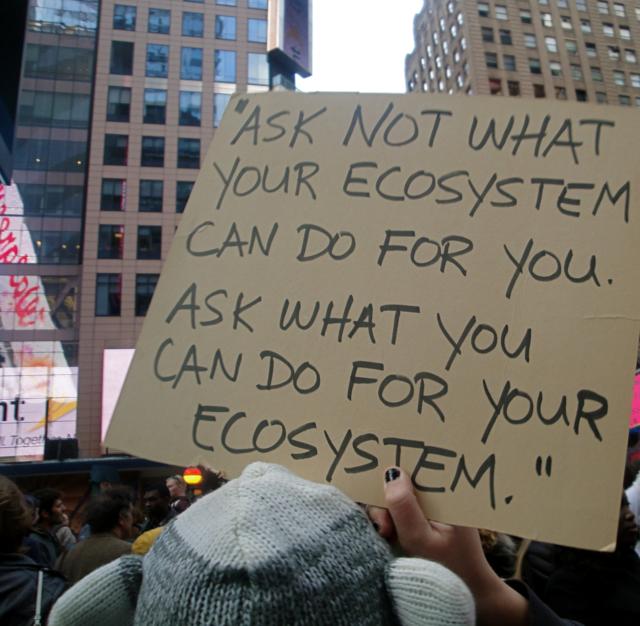 "I don't know of any governments or institutions that are doing anything to solve any of these problems. All over the world, though, I am seeing individuals and non-government organizations that are passionately involved in protecting ecosystems and species, and that's where I see results are happening." --Capt. Paul Watson

Last month, Captain Paul Watson, renowned anti-whaling activist and president of the Sea Shepherd Conservation Society, was arrested in Germany on a decade-old charge related to "a confrontation with illegal shark fin poachers in Central America back in 2002." Despite being released on bail, Watson was told to remain in Germany, "pending a decision on whether or not to extradite him to Costa Rica."

"I am confident that they will understand our plea for his human rights and recognize that if Captain Paul Watson were to be extradited to Costa Rica that would be the same as a death sentence," said Sea Shepherd's spokesman, Peter Hammarstedt. "We know that the shark fin mafia put a hit on Captain Paul Watson a couple of years ago."

This scenario provides an illustrative glimpse at what passes for modern human culture here on Profit Planet. We have an activist who dedicates himself to protecting the oceans and all life therein pitted against those who defy laws to catch sharks, cut off their fins while they are alive, and toss the maimed fish back into the ocean.

Why? Shark fins are dried, sold in markets, and made into shark fin soup -- which is then sold to the public for as much as $350 per bowl.

If it's possible to make shark finning even more despicable, consider this: The fins don't bring flavor to the soup. They are added solely for texture.

Reasons #37,614 why we Occupy: While wealthy tourists dine on sheer barbarism, it is Capt. Watson who ends up behind bars for being too good at his job: activism.

Fittingly, it may be that the only earthly creature more demonized than the activist is the shark. They are seen as the stuff of nightmares yet no shark created (for example) DDT, napalm, nuclear weapons, the internal combustion engine, predator drones, hydroelectric dams, GMOs, hedge funds, or... well, I go on for hours but let's just say that dangerous is very much in the eye of the beholder.

This majestic fish is almost universally feared yet, ironically, it is sharks that are relentlessly hunted and several species have witnessed declines of over 95 percent in their populations in the past three decades.

Some 250,000 sharks are killed by fishermen every single day and even when they're not the direct target, they end up dead. As Humane Society International explains: "Many sharks are unintended 'bycatch' by vessels fishing for high-value species such as swordfish and tuna."

Mic Check: 90 percent of the large fish in the ocean are already gone.

Do you think we could survive within an ecosystem devoid of apex predators? If so, here's a reality check from Oceana.org:

"As apex predators, sharks play an important role in the ecosystem by maintaining the species below them in the food chain and serving as an indicator for ocean health. They help remove the weak and the sick as well as keeping the balance with competitors helping to ensure species diversity. As predators, they shift their prey's spatial habitat, which alters the feeding strategy and diets of other species.... The loss of sharks has led to the decline in coral reefs, seagrass beds and the loss of commercial fisheries. By taking sharks out of the coral reef ecosystem, the larger predatory fish, such as groupers, increase in abundance and feed on the herbivores. With less herbivores, macroalgae expands and coral can no longer compete, shifting the ecosystem to one of algae dominance, affecting the survival of the reef system."

Mic Check: More than 200 million years before the dinosaurs, there were sharks. Do we really wanna be the species that wipes them out?

Phil Rockstroh sez: "The oceans of the earth are dying. This fact alone should knock us to our knees in lamentation ... should send us reeling into the streets in displays of public grief."

We urgently need to make the big picture connections in our minds and in our activism. While each of us can play a role in a wide range of crucial issues, we must never lose sight of how it all comes together.

Sure, it'd be great if corporations paid more taxes or if single-payer health care were enacted, but such changes would ultimately fall into the proverbial Titanic/deck chair category if our eco-system is not restored and respected.