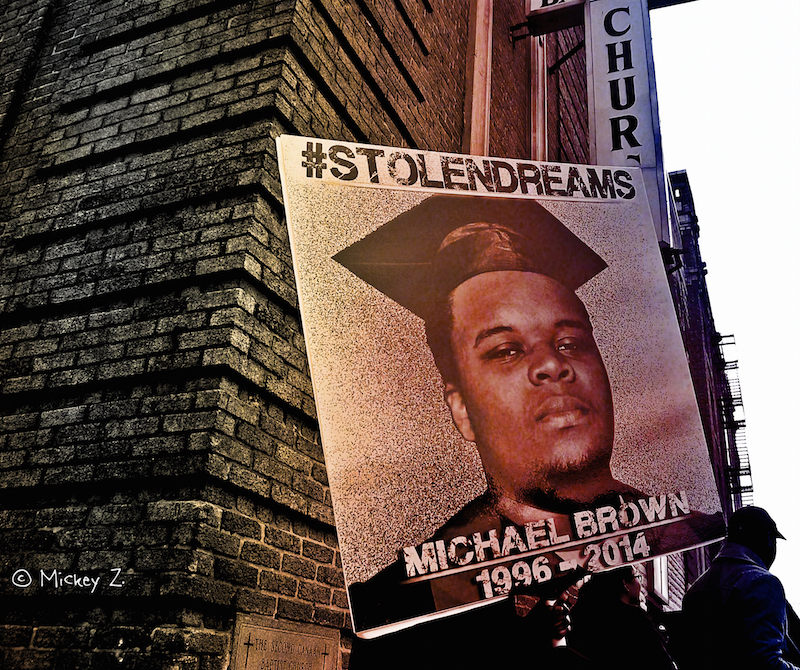 “The limits of tyrants are prescribed by the endurance of those whom they oppose.” (Frederick Douglass)

Sunday, Aug. 9 marked one year since Police Officer Darren Wilson murdered Michael Brown in Ferguson, Missouri. There was a rally to honor the occasion in Brooklyn. I planned to attend the rally, I really did (not that my presence would’ve mattered even a tiny bit) but I ended up skipping it.

Why, you may wonder? Well, it could be the spate of usual suspects (often in matching shirts) hawking newspapers, sniffing out fresh recruits, and seeking new ways to co-opt.

It could be the inevitable sound of white activists drowning out the voices of PoC as they unselfconsciously chant slogans like “hands up, don’t shoot” and “I can’t breathe.”

It could be all those white male activists proving (sic) their manhood (sic) by boldly (sic) screaming and cursing at cops, knowing full well those same cops will likely retaliate by arresting and/or assaulting a PoC.

It could be that hundreds (thousands?) of rallies have taken place since Brown’s murder yet his killer walked and in the year that’s passed, nearly 700 more people have been killed by cops -- for example, Christian Taylor.

It could be that Darren Wilson’s colleagues find the whole thing to be a sick joke.

It could be that while the national #BlackLivesMatter movement has lured in allies, most white folks still prattle on about how “all lives matter” or “not all cops.”

It could be the myriad valid reasons to question why anyone still puts any faith in the sign holding, the chanting, the same old tactics by the same old groups and foundations.

It could be that I’ve been writing and talking about activist tactics since, well, forever.

It could be all of the above… or maybe it was that the event’s Facebook page contained this line: “The protest will demand an end to use of the police to oppress and kill predominantly Black and Brown people.”

Demand? To whom, I wonder, will this demand be made and in what form that hasn’t already been tried tens of thousands of times before? And doesn’t the word demand imply more than cardboard signs, timeworn chants, and trending hashtags?

Then again, why succumb to that simplistic gripe about Occupy Wall Street (OWS): But they have no demands!

If we have to ask (beg?) the 1% to modify some of their behavior (e.g. please recognize that at least some Black lives matter), we are acknowledging and accepting that the possibility of change is their choice and we thus authenticate their freedom to exercise power over us.

Plus, of course, the ruling class has long figured out that offering the occasional minor concession further reinforces this tacit arrangement. They understand how a demand often removes a concern from its larger context (male supremacy, white supremacy, class supremacy) and they therefore have virtually no problem with the rabble focusing on single issues.

Hey, it helps present the illusion of free speech for all involved, right? USA! USA! USA!

Reality Check: What almost all of us activists are doing -- the tactics and methods we so passionately cling to and defend -- doesn’t work any more. Some of it has never worked.

There’s no shame in admitting that it felt good to go to protests but we all could’ve done better… much better. But even if there is shame, why must we let it outweigh the task at hand? If we truly want drastic and sustainable social change, it’s time to stop trusting the politicians, the foundations, and the sectarians who ultimately want to keep the system afloat.

It’s time to accept that repetitive marches and colorful signs and witty memes present no threat to those in power.

It’s time to scream from the mountain tops that trusting liberal politicians will never create change.

It’s time for us to dig deeper, to recognize and seriously address the Unholy Trinity of patriarchy, white supremacy, and capitalism -- and to call out anyone who defends or profits from such oppression.

It’s time to channel all our pain and alienation and fear into new forms of dissent.

It’s time to smash the archaic activism archetype right down to its foundation and rebuild a more flexible structure under the guidance of new architects and artisans.

"Occupy, Black Lives Matter, Activism: On Demand" by Mickey Z. is licensed under a Creative Commons Attribution-NoDerivatives 4.0 International License.
Based on a work at https://worldnewstrust.com/occupy-black-lives-matter-activism-on-demand-mickey-z.