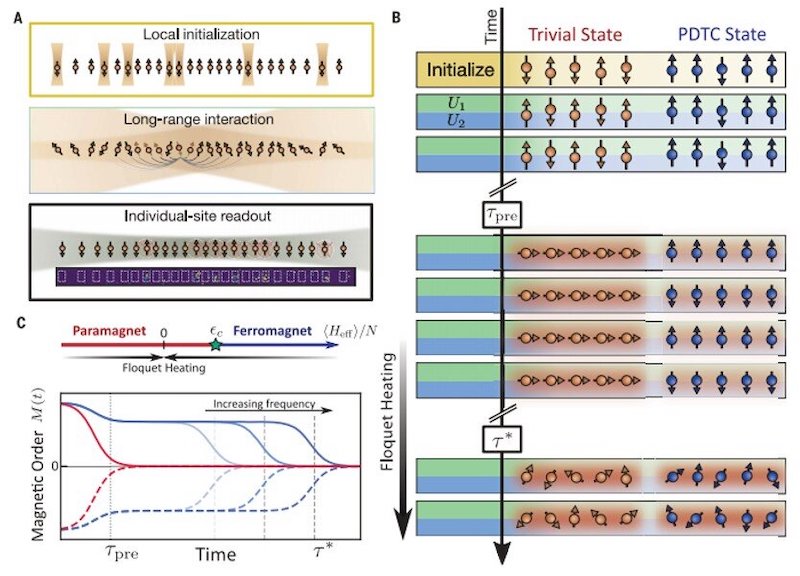 Experimental setup and protocol. (A) Schematic of the 25-ion chain. Single-site addressing (top), global Raman beams (middle), and statedependent fluorescence (bottom) enable the preparation, evolution, and detection of the quantum dynamics. (B) For intermediate times, the system approaches an equilibrium state of the prethermal Hamiltonian Heff. In the trivial Floquet phase, the magnetization after tpre decays to zero. In the PDTC phase, the magnetization changes sign every period, which leads to a robust subharmonic response. At times t ≫ t, Floquet heating brings the manybody system to a featureless infinite temperature ensemble. (C) (Top) Phase diagram of Heff. Owing to the antiferromagnetic nature of the Ising interactions Jij > 0, the ferromagnetic phase occurs at the top of the many-body spectrum. (Bottom) Schematic of the stroboscopic magnetization dynamics in the trivial (red) and PDTC (blue) phase (full and dashed curves represent even and odd driving periods, respectively). When the energy density of the initial state is above the critical value ec, the system is in the PDTC phase, and its lifetime follows the frequency-dependent heating time. Credit: Science, doi: 10.1126/science.abg8102

June 24, 2021 (Phys.org) -- A framework of statistical physics can be extended to the nonequilibrium setting to discover previously unidentified phases of matter catalyzed by periodic driving.

In a new study now published on Science, A. Kyprianidis and an interdisciplinary research team in the United States used a quantum simulator to observe signatures of a nonequilibrium driven phase without disorder to form a prethermal discrete time crystal.

The scientists overcame the heating problem by using high-frequency driving to form an expansive time window for nonequilibrium phases to emerge.

The team presented Floquet prethermalization as a general strategy to create, stabilize and study intrinsically out-of-equilibrium phases of matter.