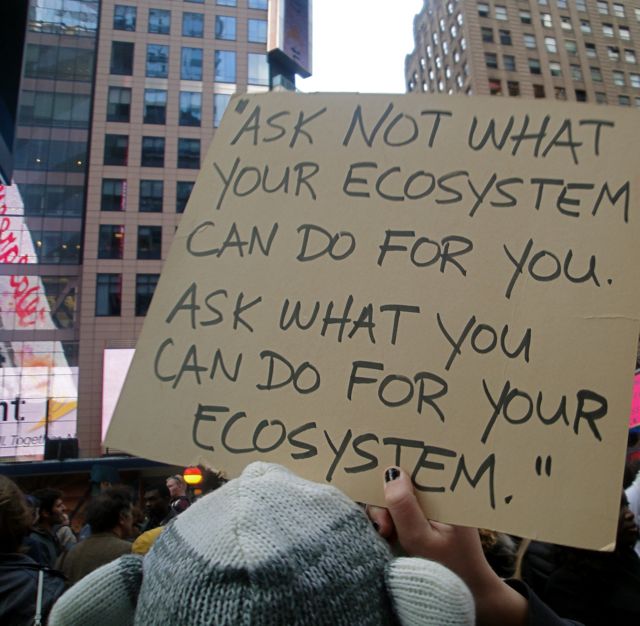 “In a world where the dead have returned to life, the word 'trouble' loses much of its meaning.”

Imagine a lethal global menace lurking beneath the icy depths of a Siberian swamp. Living organisms frozen in time for 30,000 years -- now re-emerging to threaten all life on earth.

This might sound like a typical evening on Netflix but here's the catch: The melting of the permafrost is not science fiction and it's not gonna go away unless we provoke major changes… right fuckin' now.

As the New York Times reported in 2011: "Experts have long known that northern lands were a storehouse of frozen carbon, locked up in the form of leaves, roots and other organic matter trapped in icy soil -- a mix that, when thawed, can produce methane and carbon dioxide, gases that trap heat and warm the planet. But they have been stunned in recent years to realize just how much organic debris is there."

One estimate of the methane stored in the west Siberian bog alone has it equivalent to emitting 1.7 trillion tons of CO2, which is more greenhouse gas than has been emitted by humans in the past 200 years.

FYI: The melting of the permafrost is happening thanks to climate change -- the same climate change we all contribute to and we all tacitly allow corporations to create.

“Some scientists expect the Arctic ocean to be largely free of summer ice by 2020,” adds the Guardian's John Vidal. “The growing fear is that as the ice retreats, the warming of the sea water will allow offshore permafrost to release ever greater quantities of methane. A giant reservoir of the greenhouse gas, in the form of gas hydrates on the East Siberian Arctic Shelf (ESAS), could be emitted, either slowly over 50 years or catastrophically fast over a shorter time frame.”

On the edge of your seat yet?

In not, please allow me to introduce the inconvenient truth that, as a greenhouse gas, methane is 20-30 times more powerful than carbon dioxide. How does this relate to climate change?

More from the Times: "When organic material comes out of the deep freeze, it is consumed by bacteria. If the material is well-aerated, bacteria that breathe oxygen will perform the breakdown, and the carbon will enter the air as carbon dioxide, the primary greenhouse gas. But in areas where oxygen is limited, like the bottom of a lake or wetland, a group of bacteria called methanogens will break down the organic material, and the carbon will emerge as methane."

FYI: Once the decomposition begins, (cue the ominous music) It. Cannot. Be. Reversed.

What can be reversed is the way humans choose to live as part of a finite ecosystem. A culture that runs on fossil fuels, animal exploitation, and the mantra of infinite growth (among other nightmares) is doomed, by definition. All other forms of life are also put into severe peril by such human hubris and denial.

The only players with a myopic interest in the homicidal/suicidal status quo are those who earn short-term profits off of our conspicuous consumption… and our indifference.

Corporations pollute on a scale that far surpasses we individuals. For example, if every person in the United States did everything Al Gore suggested in An Inconvenient Truth, carbon emissions would fall only 22 percent or so. Meanwhile, Exxon-Mobil, a company with annual sales (more than $404 billion) that exceed the gross domestic product of 120 countries, emits 138 million tons of CO2 every year.

Hence, the shortest, most powerful path toward addressing climate change and therefore staving off the melting of the permafrost: Expose, challenge and dismantle the most heinous eco-criminals.

But while we do the urgent outreach and crucial organizing to achieve such a goal, we must also collectively alter our individual and community lifestyles as if our very existence were hanging in the balance. (News flash: It is!)

It’s not too late to write a new ending to this horror story… but we can’t squander any more time on mainstream spectacles like royal babies or political sexting. We also cannot waste epic amounts of passion and rage as ego-flexing keyboard warriors debating about semantics, activist personalities, or the role of anarchists within this or that group.

Let’s instead use our limited time and energy to create change -- right now -- in our everyday life, e.g. stop eating meat, stop driving cars, stop allowing corporations to dictate how we live, connect with others, and get active! Contrary to some more-radical-than-thou edicts, this path can not only help us downsize the global damage but can also teach us how to overcome corporate propaganda and subsequently challenge -- and eventually crush -- corporate power.

Camus sez: “Real generosity towards the future lies in giving all to the present.”

There is no down side to living your life as if we are at the environmental point of no return and we are almost entirely to blame. If we do so, our culture could become a little less violent, daily life might grow a touch simpler, the eco-system would get at least a temporary reprieve, corporate profits would plummet precipitously, and the permafrost would stay true its name.

Sounds like a giant step toward winning to me…