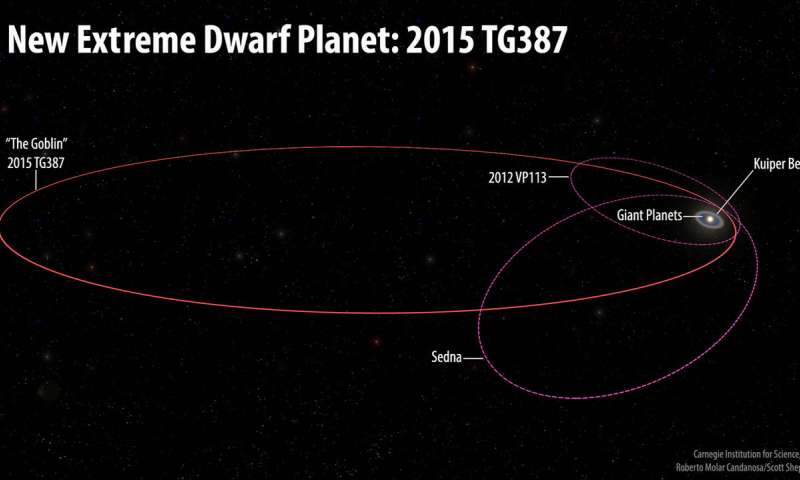 The orbits of the new extreme dwarf planet 2015 TG387 and its fellow Inner Oort Cloud objects 2012 VP113 and Sedna as compared with the rest of the Solar System. 2015 TG387 was nicknamed 'The Goblin' by the discoverers, as its provisional designation contains TG and the object was first seen near Halloween. 2015 TG387 has a larger semi-major axis than either 2012 VP113 or Sedna, which means it travels much further from the Sun at its most distant point in its orbit, which is around 2300 AU. Credit: Roberto Molar Candanosa and Scott Sheppard, courtesy of Carnegie Institution for Science.

Oct. 2, 2018 (Phys.org) -- Carnegie's Scott Sheppard and his colleagues -- Northern Arizona University's Chad Trujillo, and the University of Hawaii's David Tholen -- are once again redefining our Solar System's edge. They discovered a new extremely distant object far beyond Pluto with an orbit that supports the presence of an even-farther-out, Super-Earth or larger Planet X.

The newly found object, called 2015 TG387, was announced Tuesday by the International Astronomical Union's Minor Planet Center. A paper with the full details of the discovery has also been submitted to the Astronomical Journal.

2015 TG387 was discovered about 80 astronomical units (AU) from the Sun, a measurement defined as the distance between the Earth and Sun. For context, Pluto is around 34 AU, so 2015 TG387 is about two and a half times further away from the Sun than Pluto is right now.

The new object is on a very elongated orbit and never comes closer to the Sun, a point called perihelion, than about 65 AU. Only 2012 VP113 and Sedna at 80 and 76 AU respectively have more-distant perihelia than 2015 TG387. Though 2015 TG387 has the third-most-distant perihelion, its orbital semi-major axis is larger than 2012 VP113 and Sedna's, meaning it travels much farther from the Sun than they do. At its furthest point, it reaches all the way out to about 2,300 AU. 2015 TG387 is one of the few known objects that never comes close enough to the Solar System's giant planets, like Neptune and Jupiter, to have significant gravitational interactions with them.