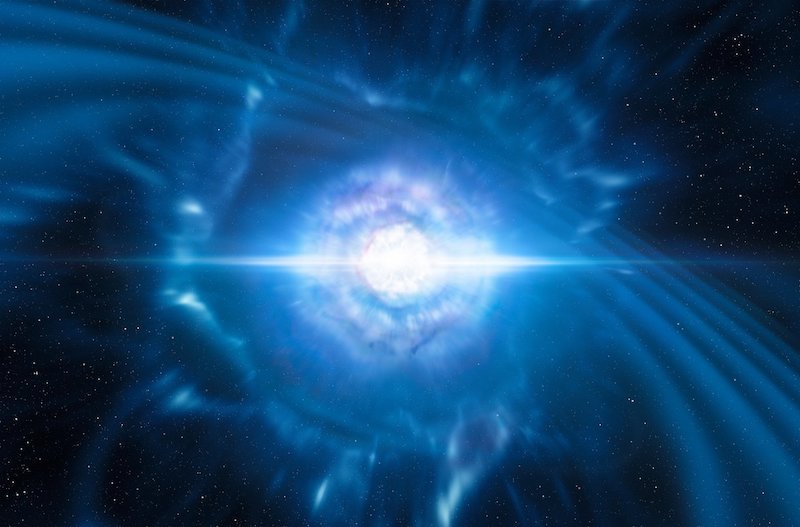 This artist's impression shows two tiny but very dense neutron stars at the point at which they merge and explode as a kilonova. Such a very rare event is expected to produce both gravitational waves and a short gamma-ray burst, both of which were observed on 17 August 2017 by LIGO-Virgo and Fermi/INTEGRAL respectively. Subsequent detailed observations with many ESO telescopes confirmed that this object, seen in the galaxy NGC 4993 about 130 million light-years from the Earth, is indeed a kilonova. Such objects are the main source of very heavy chemical elements, such as gold and platinum, in the Universe. Credit: ESO/L. Calçada/M. Kornmesser

Oct. 16, 2017 (Phys.org) -- For the first time, scientists have witnessed the cataclysmic crash of two ultra-dense neutron stars in a galaxy far away, and concluded that such impacts forged at least half the gold in the Universe.

Shockwaves and light flashes from the collision travelled some 130 million light-years to be captured by Earthly detectors on Aug. 17, excited teams revealed at press conferences held around the globe Monday as a dozen related science papers were published in top academic journals.

"We witnessed history unfolding in front of our eyes: two neutron stars drawing closer, closer... turning faster and faster around each other, then colliding and scattering debris all over the place," co-discoverer Benoit Mours of France's CNRS research institute told AFP.

The groundbreaking observation solved a number of physics riddles and sent ripples of excitement through the scientific community.

Most jaw-dropping for many, the data finally revealed the origin of much of the gold, platinum, uranium, mercury and other heavy elements in the Universe.