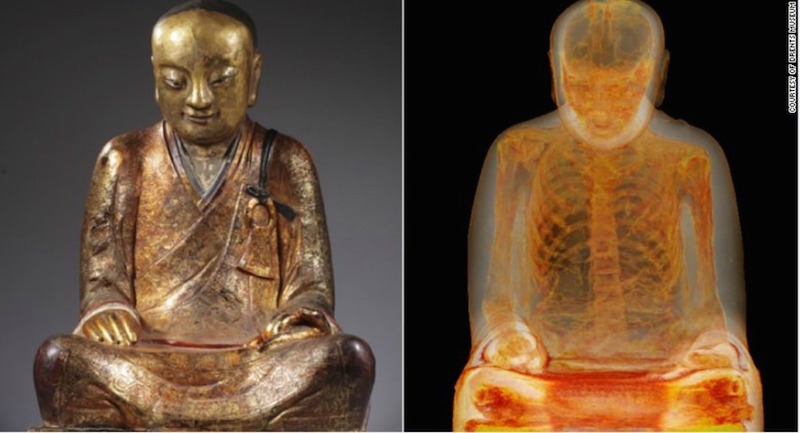 A gold statue of Buddha housed at Hungary's Natural History Museum has been discovered to contain the mummified body of an ancient Chinese monk. PHOTO CREDIT: Courtesy Drents Museum

March 6, 2015 (Reuters) -- A Buddha statue from China that conceals the remains of a monk who turned himself into a mummy almost a millennium ago is the centrepiece of an exhibition in Budapest.

Visitors to the popular "Mummy World" exhibition at the Natural History Museum see a golden statue of a sitting Buddha, about four-foot (1.2-m) tall.

On a television monitor, they can see the skeletal remains of the mummified monk inside it.

"The Buddha statue belongs to a Dutch private collector and when he bought it, he had no idea what it was hiding inside," said Monika Kiss-Stefan, a spokeswoman for the Budapest museum.

She said the monk had prepared for his death meticulously.

Monks who choose self-mummification ate only seeds for a long time and then roots of a poisonous plant to prevent maggots eating their flesh, she said.