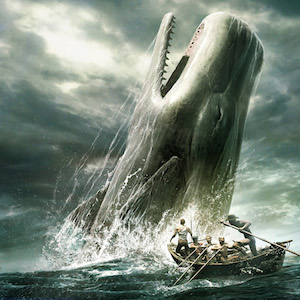 He breached out of the horse latitudes in the Great Sea of Politics last spring and destroyed all the lesser whales with his mighty flukes, but now the Democratic Pequod, with its diverse and inclusive crew has vowed to chase him to the ends of the earth until he spouts black blood and rolls dead out.

It’s Moby Trump! Skin your eyes for him men (and women, and intersectional non-binary zhes, theys, and hirs)! Do ye see a Bitcoin nailed to yonder mast? It goes to ye who raises me that whale of white privilege!

Who is Ahab in this story? Why The New York Times, of course. Such is the vastness of its pious obsession with the cosmic malignity of Moby Trump, who chomped off Ahab’s limb -- fondly known as Hillary -- the last time the Pequod set sail. With Jim Comey as Starbuck, the ever-upright Quaker mate, cool, aloof, marinated in rectitude, yet deadly with his lance.

And so the great American tragedy plays out on C-Span.

Remember, though, that in the original tale penned by the loser (never made a buck) Herman Melville, the white whale sank the Pequod in a final, desperate, whorl of vengeance, while Ahab drowned entwined in his own harpoon lines, pinned upon the very hump of his inscrutable quarry. And I alone am left to tell thee….

So much for literary conceits -- and hat tip to Bob Dylan for reminding us, in his just-released Nobel valedictory, how much the white whale should mean to us. In this bleak and tawdry age of content-less Kardashian trash, there really are latent cosmic storylines, and this saga of Moby Trump is a tragedy that the Republic perhaps can’t bear to hear: exactly how we destroyed ourselves.

The question is, what will remain of the American polity once the mighty Trump is harpooned, flensed, and boiled down to his essential oils? A great evil vacuum, I predict, rather like Melville’s fabled Norway maelstrom. And within it, everything and everyone in the Deep State will be revealed as hollow and ghostlike, mere revenants of our beloved institutions, including the rule of law.

Impeachment is something that hovers just a bit above and beside the law, founded, as it is, on the vague notion of high crimes and misdemeanors -- which can mean anything, really, to parties so determined to wield it. The blundering Trump expressed a hope that a dodgy FBI investigation against General Flynn for conversing with the Russian ambassador (really, he talked with an envoy from a foreign land?) might be laid aside. Well, that could just do the trick, according to Jeffrey Toobin of CNN, legal mouthpiece for “the Resistence.”

I confess that I never considered Mr. Trump -- or as I’m fond of calling him, the Golden Golem of Greatness -- a horse that was going to finish. I predicted after the election that he would be removed from office by hook or by crook inside of a few months. While I do not align with his antagonists, I consider him unfit for the job he won in an ignominious election against a repulsive opponent. He appears simply to not know what he is doing, and that’s pretty scary at this moment in history when, apparently unbeknownst to purveyors of “news,” and the countless factotums of government -- from the larval agency clerks to the preening poobahs of congress to the scheming technocrat overlords of the intel matrix -- the nation is poised at the rim of a financial clusterfuck that will make the fall of the Roman Empire look like a small business bankruptcy.

In the meantime, watch as a toxic political tide sweeps away the foundations of a 200-odd-year experiment in civil order. Six months from now, nobody will trust anyone or anything, and we may easily see a great deal of kinetic lashing out against each other in the ringing, raging confusion of the political vortex we’ve gleefully ventured into.