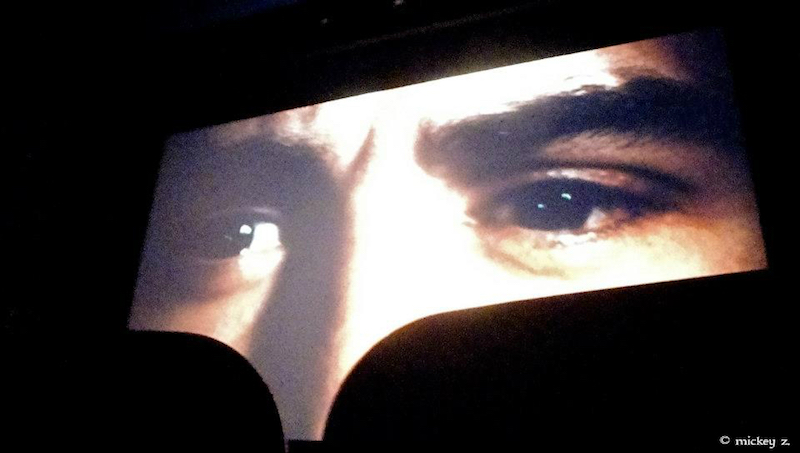 Recently, I was tagged on Facebook to participate in something called the “80s Music Challenge.”

I excitedly agreed but such social media shenanigans did not come without an ugly lesson. You see, when I contemplated which songs to post, I encountered many that contained horribly insensitive and misogynistic lyrics -- by performers like Public Enemy, Van Halen, Beastie Boys, Ice T, Guns ‘n Roses, etc.

Questions: What was happening in my young brain when I excitedly and often sang along with songs by these and so many other male musicians? How deeply embedded is this conditioning and how long might it take to effectively excavate it?

This experience and the ensuing line of thought soon had me considering other aspects of pop culture that surely shaped my masculine world view.

“One of the best films of all time!”
Right on cue, Facebook’s “On This Day” function reminded me that I’d posted photos (sample above) from an August 2012 screening of an iconic film for any white American male (especially one of Italian heritage, from NYC): Taxi Driver.

Besides the infamous male hero/antihero (Travis Bickle, played by uber male Robert DeNiro) Taxi Driver also features a 13-year-old actress playing a traumatized, prostituted adolescent. Fun fact: Jodie Foster had to undergo psychological evaluation before being allowed to take the role. As I pondered seeing this movie so many years ago and how often I’ve subsequently seen it and perused scenes from it, I suddenly realized how everything in my male socialization had prepared me to seek out and appreciate such “entertainment” as “one of the best films of all time.”

Acclaimed director Martin Scorsese has a small role in his film. He could’ve played any role he wanted and spoke whatever dialogue he preferred but -- perhaps offering a glimpse into his personal mindset vis-a-vis women, race, guns, and violence -- here’s what scene Scorsese appears in (trigger warning):

Scorsese and DeNiro later worked together on Raging Bull -- a movie often deemed as “the best of the 1980s.” I saw Raging Bull in the theater and again -- many times -- on VHS and eventually over and over on YouTube. Here’s a small taste of what passes for superior acting, directing, and screenwriting in the “film of the decade” (trigger warning):

It’s basically an update on an enduring “gangster film” trope that can be traced back to the legendary James Cagney:

I could go on, but I already have and that’s the point. My mind is now an ugly tangle of patriarchal programming and it remains to be seen how much can be reversed.

Personal Favorites
As is my style, I continued to explore this concept and soon got very personal by re-visiting two of my all-time favorite pop culture influences. I’ve recently deconstructed much about Bruce Lee here but what about his most famous and widely seen film, Enter the Dragon?

I can’t even begin to calculate how many times I’ve seen Enter the Dragon since my teenage years. I understood its dependence on violent tropes rather early on, but it was only very recently that its degrading depiction of women and reliance on casual racism has rendered it unwatchable to me.

Again, I ponder: What did these not-so-subliminal messages do to my impressionable mind back when Bruce was my unquestioned hero?

Not content with this level of uncomfortable personal deconstruction, I went even further back. All the way to my grade school years when I first became infatuated with the Marx Brothers. Groucho’s fast-tongued wit captured my imagination and I’ve come to model some of my style upon it. However, I’ve always adored Harpo. Who could resist this silent imp, this innocent lamb of a comedian... right?

Reality check: Harpo used his cute-mute persona to disguise rampant lechery as humor. Aggressively chasing down a seemingly non-stop supply of young blonde women (they appear to exist solely for this purpose) was literally one of his ongoing and most popular shticks! This video captures a little of what Harpo helped normalize through his boyish charm and seemingly harmless personality:

I started religiously watching the Marx Brothers was I was about 11 or 12 and can still recite most of their movie dialogue along with them. What the fuck was I learning by adoring Harpo for decades? One lesson: It’s goofy, innocent, safe, silly, clever, wholesome, and classic comedy fun to make women fear you! Chase them relentlessly and bask in the ensuing laughter!

Name the Problem
It’s easy to imagine some readers shaking their heads and almost pitying me for overanalyzing, having no sense of humor, and taking the fun out of everything. But I’ve worked too hard and learned too much and have too far to go to accept being dismissed as a mere party pooper.

Instead, I put the challenge to you. I urge you to take a closer -- much closer -- look at what passes for culture on Planet Patriarchy. I urge you to carefully consider these words from Andrea Dworkin: “Male supremacy is fused into the language, so that every sentence both heralds and affirms it.”

Before we can name the problem, we have to see it.

Masculinity goes to the movies... by Mickey Z. is licensed under a Creative Commons Attribution-ShareAlike 4.0 International License.
Based on a work at http://worldnewstrust.com/masculinity-goes-to-the-movies-mickey-z.