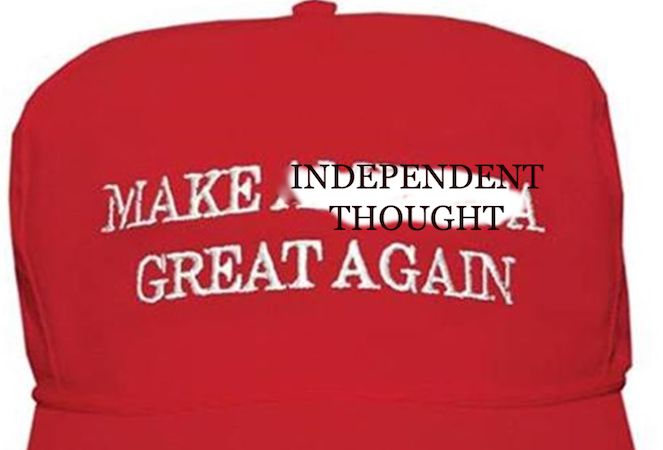 And the world looks just the same/And history ain't changed

Because the banners, they are flown in the next war

With the advent of the public relations industry around World War I, the systematic corruption of language — hence, the corruption of thoughts, ideas, and reality — became overt. In today’s world of branding, social media, fake news, and clickbait, this process has reached its inevitable climax.

With an intro like that ^ , I could go in many different directions, huh? For the purposes of this article, I’ll focus on pithy but persuasive ideological slogans — specifically two that are butting heads as I write this.

There's nothing in the streets/That looks any different to me

And the slogans are replaced, by-the-bye

Good branding (but not nearly as vague and unifying as MAGA). Ironically (perhaps), it serves white people the most. We can post these three words on our social media pages like it’s a vaccine. What virus has us terrorized? That’s easy. Left-leaning white people most fear being called racist in public (especially on Twitter). To avoid this fate worse than death, we’ll say whatever needs to be said — even if we strongly disagree with it.

We’ll justify and support looting. We’ll preach the gospel according to Robin DiAngelo. We'll portray anyone who self-identifies as "Antifa" as indistinguishable from a soldier fighting against Nazi Germany in 1943. We’ll cancel and sanction anyone who challenges radical dogma or breaks the rules. You see, unlike MAGA, BLM commandments aren’t impossibly ephemeral. On the contrary, they’re impossibly carved-in-stone yet must be followed without question.

What does “black lives matter” really mean — as a slogan? It means you can, if you choose, ignore facts and you can twist statistics to fit your mood. It also means you’re part of a new woke religion with the power to, um, change syrup bottle labels and, well… not much else. Yelling "black lives matter" at a protest does less than nothing to promote much-needed racial justice.

Excellent branding. I’d call it cynical but that would be redundant. Most Americans would like to perceive their country as being “great.” Why wouldn’t they? Thus, whatever someone does under the MAGA banner can theoretically be excused as serving a noble purpose. Translation: Like all good slogans, it has no concrete meaning. Wearing a MAGA hat does less than nothing to create greatness of any kind.

Adherents twist themselves into a pretzel to accommodate all the MAGA contradictions because the man behind the slogan keeps moving the goalposts. And to reject the man behind the slogan is tantamount to rejecting the slogan and thus, rejecting America’s greatness. So, after a while, your stances on religion and science and justice and morality itself become malleable enough to fit whatever corrupted definition of “great” is being tweeted out to the masses.

What does “make America great again” mean — as a slogan? It means you can, if you choose, ignore facts and you can twist statistics to fit your mood. It means any report that contradicts your worldview has to be "fake news." Also, it means you finally have permission to express all that anger. Where do you aim this rage? Just follow the tweets for the target of the day or hour. When in doubt, aim for a woman or a person of color.

Same as the old boss

To do your part to counter these trends, whenever you do opt to engage online:

Best of all: Regularly step away from your devices and participate in the collective, shared, offline reality in which understanding and cooperation are still very much possible.

I said it in a recent article. I’ll say it again now: It’s time to rediscover the subversive pleasure of thinking for yourself.