Limbaugh, Obama, and the “Monsters” We Choose to See — Mickey Z. 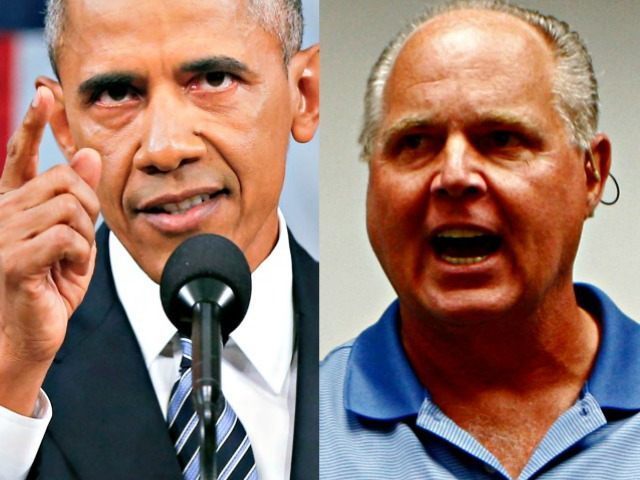 “They say that what you mock/Will surely overtake you

NOTE: Since we live in a world of black-and-white thinking and confirmation bias, I feel compelled to preemptively explain that I am not pro-Rush Limbaugh. Not even close. In fact, I’d say I stood diametrically opposed to most of his views. This article, however, is not about Limbaugh. It’s about hypocrisy and groupthink.

Rush Limbaugh died on February 17, 2021. News of his passing was less than a few minutes old when the #woke memes started to appear — figuratively pissing on the right-wing icon’s grave. Now, there are some cases (e.g. rapists and pedophiles) where I’d willingly join in such a reaction. In this instance, however, I was more transfixed by the cognitive dissonance.

The “left” had spent the past four years decrying the specious behavior of Trump and his loyal acolytes. When the “right” was cruel, mean-spirited, and regularly declared “fuck your feelings,” the compassionate (sic) #woke crowd denounced such behavior and called for a “return” to civility (as if civility has ever been the norm). Just wait till the good guys are back in charge! they promised. You know, “Love Trumps Hate,” "When they go low, we go high," and all that. On February 17, I found myself watching those same leftists — from smug Biden voters to legit anarchists — competing to see who could celebrate the death of Rush Limbaugh more enthusiastically and viciously. Welcome to life on the new path toward unity and cooperation! I posted about this ugliness on Facebook and predictably got some pushback. The meme shared most widely (including as a retort to me) was this one: 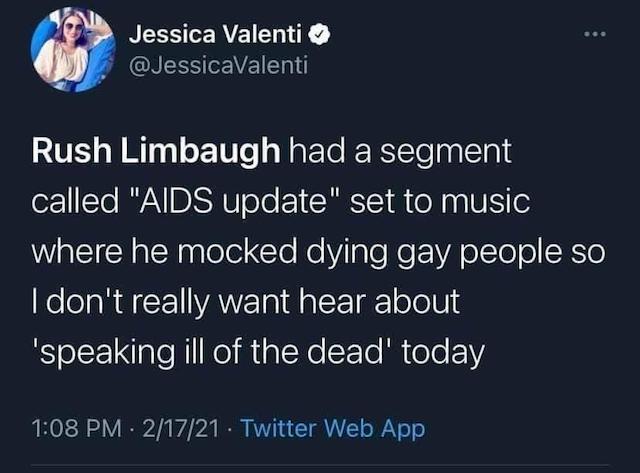 The claim is true. Go ahead, fact-check it. The “AIDS Update” lasted two weeks before Limbaugh ditched it and issued this apology: “It’s the single most regretful thing I’ve ever done because it ended up making fun of people who were dying long, painful, and excruciating deaths when they were not the target. It was a totally irresponsible thing to do.” But, if you’re just learning about this and are now trying to conjure up excuses and explanations for Rush’s choices, I have a strong suggestion: STOP. Just stop. Check yourself and reclaim your humanity. Take your time. I’ll wait. (drums fingers on table, scrolls Facebook news feed)

Okay, moving right along. The essence of the pushback I got on Facebook was this: How dare I show any restraint when discussing a “monster”? Elsewhere online, the word “monster” was being thrown around more often than in the Godzilla vs. Kong trailer. Thus, after all this build-up, I have two monkey wrench-style questions for the wokesters out there:

From the moderate Pelosi left to the radical-wannabe Maddow crowd, Barack Obama is beyond reproach. No one in their right mind would deem him a “monster." No one would utter his name in the same sentence as Rush Limbaugh. Since November 2016, we all swooned with nostalgia for a time when we had an adult, a good man, and a role model in the White House. Therefore, we feel comfortable with sharing memes like this about Trump’s guy, Rush: 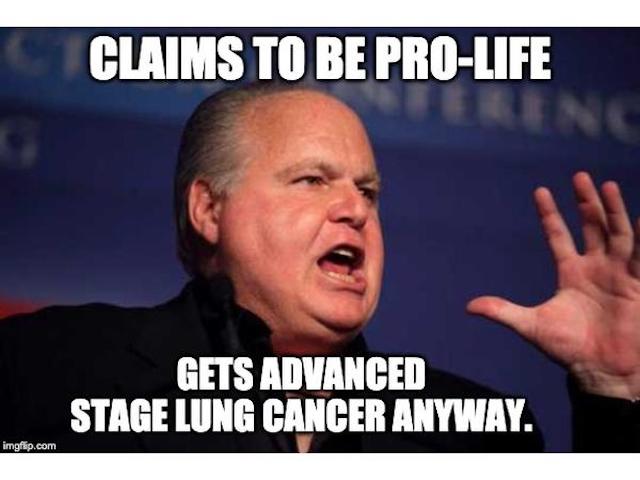 Again, you can consult your nearest search engine and easily find a litany of heinous Limbaugh behavior. I will not be cataloging it here. Instead, I’ll use the remainder of this article to present just a tiny sampling of the case against another “monster” — hiding in plain sight.

Back in 2008, when Barack Obama was first running for president, I had little schtick I’d do at my many public talks. (Keep in mind, a decent-sized chunk of my audiences swung to the “left.”) Anyway, I’d provide this “public service announcement”:

Nervous laughter. Some enraged reactions. Later, there would be many futile emails and messages attempting to challenge the veracity of the statements I made about their hero. Meanwhile, back at the talk, I wasn’t done yet. I’d finish up my two-party bit by adding: “No matter who you like, I truly believe that either McCain or Obama will help make this country what it once was: (long pause to build anticipation) an arctic region covered with ice.” (insert rim shot here)

In December 2011, President Obama signed the National Defense Authorization Act (NDAA) into law. The NDAA contained a provision allowing worldwide indefinite detention. At the time, the ACLU called this action a “blight” on Obama’s legacy because “he will forever be known as the president who signed indefinite detention without charge or trial into law.” Will he though? Nearly a decade later, is Mr. Yes We Can known for his odious contributions to government repression? Or has the #woke crowd scrubbed his image to the point of virtual infallibility?

The NDAA, the ACLU explained, also restricted the transfers of cleared detainees from the detention facility at Guantanamo Bay to foreign countries for resettlement or repatriation. This made it virtually impossible for Obama to fulfill his 2008 campaign “promise” of closing Guantanamo within one year of taking office. Spoiler alert: Gitmo is still up and running. Will you share memes about Obama going directly to Hell when he dies?

What about torture? Surely, His Holiness took steps to hold perpetrators of Bush-era torture accountable, right? Here’s how Adam Serwer explained it in a March 2018 article in The Atlantic: “A Justice Department inquiry into interrogators who broke even the “acceptable torture” guidelines ended with no charges. Civil lawsuits from former detainees were blocked when the Obama-era Justice Department invoked the state secrets doctrine. An internal Justice Department review of the torture memo’s authors concluded they had not committed professional misconduct when they worked backward to justify the Bush administration’s use of torture in defiance of laws against it. Even a proposal for a South African-style ‘truth and reconciliation' commission was rejected. All avenues for any form of accountability for torture — criminal, civil, even professional — were blocked by Obama-era officials. Even an episode in which the CIA spied on Senate staff in an effort to stonewall an inquiry that ultimately found CIA torture ineffective, and then lied about having done so, ended with little more than an apology.” Have we yet entered the realm of "monsters"?

The Pope of Hope took office in the midst of a financial crisis, plans for a bailout of banks and financial institutions, and the worst foreclosure crisis in 80 years. He “promised" to allocate up to $100 billion in bailout funds to prevent foreclosures. At the end of his two terms, only $24 billion had been spent. Most of it arrived too late to prevent over nine million American families from losing their homes. To add insult to injury, Obama's Treasury Department expedited such foreclosures thanks to a program allowing them to do so without congressional interference. Yet another dose of "change we can believe in"?

And then there were the drones. All. Those. Drones. President George W. Bush was (justifiably) known as a warmonger… a “monster,” if you will. As for Obama, the Nobel Peace Prize winner, he:

Journalist Jeremy Scahill declared that Obama will “go down in history as the president who legitimized and systematized a process by which the United States asserts the right to conduct assassination operations around the world.” Will he though? Will history accurately tell his story and expose Barack Obama as a “monster"?

In his recent memoir, the saintly Obama explained: “Unlike some on the left, I’d never engaged in wholesale condemnation of the Bush administration’s approach to counterterrorism.” You might even say the liberal hero got a kick out of his unlimited drone powers — as demonstrated by him making very public jokes like this:

Senator Obama voted in favor of the FISA Amendments Act of 2008. It has been used as the legal basis for the surveillance programs (including PRISM) disclosed by Edward Snowden in 2013. Just a few days before Donald Trump was inaugurated, President Obama doubled down on his fetish for domestic spying. Executive Order 12333 gave the NSA even more power than it already had. Obama empowered them to share a raw stream of the communications it regularly intercepts. The “intercepting” part was nothing new under the liberal savior. The “raw” part was.

The NSA no longer has to screen the data and/or filter out personal information that could put innocent people in danger. Instead, thanks to the wokest monster of all, they could now immediately share the unedited data with agencies like the FBI, the DEA, and the Department of Homeland Security. How many people had their privacy violated and how many people have been exposed unnecessarily? When Obama dies, will you make cancer jokes and post “let him rot” on your Twitter account? Or will you instead share video clips of him playing basketball and/or singing “Amazing Grace”? 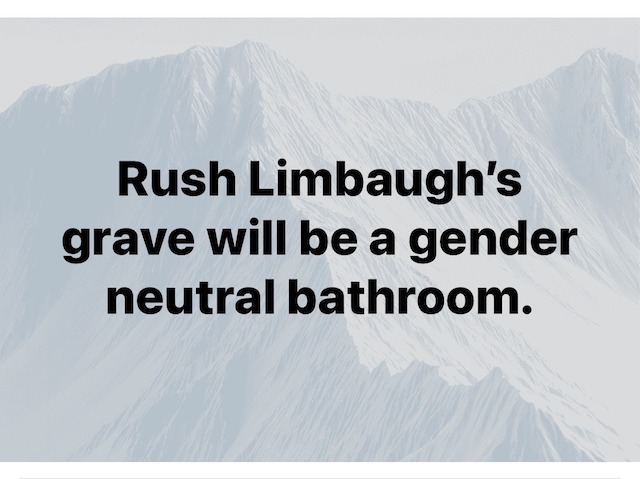 Only time will tell if the people who laughed about Rush Limbaugh’s grave being turned into a gender-neutral bathroom will demonstrate equal vitriol for a man who actually signed bills and authorized military actions. Yes, Limbaugh was an unabashed bigot, an unrepentant racist, homophobe, classist, and misogynist. He helped lay the groundwork for Trumpism. Unlike Obama, however, he did not imprison anyone indefinitely without charges or order extrajudicial assassinations. He did not make it easier for millions of working-class Americans to lose their homes. He did not spy on you and destroy any semblance of privacy. He did not legally protect Americans who practiced torture. He did not launch drones into wedding parties in Afghanistan. He did not commit any acts that could and should have him tried for war crimes.

This is not an apples-to-apples comparison of “monsters.” Our planet is overflowing with monsters (almost always men) of many varieties — each his own form of repugnant. What most differentiates them is which public relations narrative is attached to their legacy. Even global criminals will have zealots to whitewash their record and re-package them as heroic. Therefore, I urge you to heed the words of Friedrich Nietzsche: “Whoever fights monsters should see to it that in the process, he does not become a monster.”