Like the seasons, too, we must change… | Mickey Z. 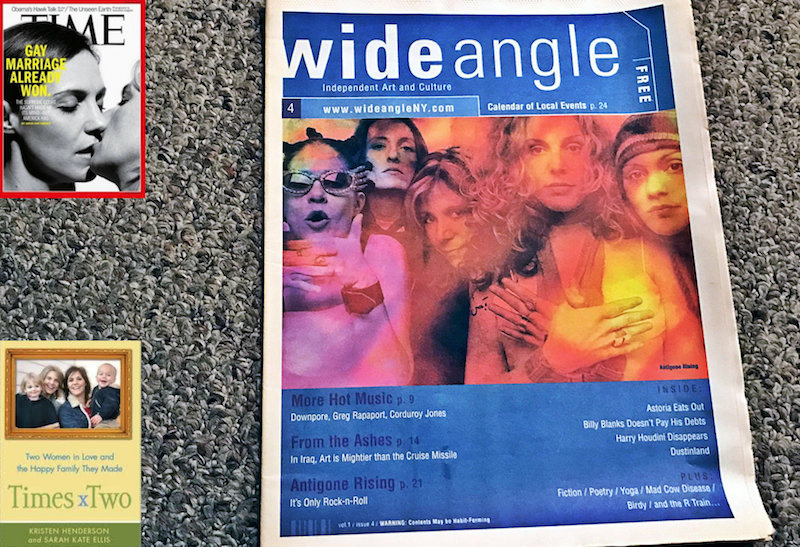 Mickey Z.: What other career paths did you consider and why?

Kristen H.: I never considered any other career path.

My fifth book, 50 American Revolutions You're Not Supposed to Know, came out in 2005. Kristen Henderson of Antigone Rising wrote one of the blurbs, calling my work “a reminder that complacency is so not sexy.” She said my book, “inspires one to stand up to the things that don't pass the tummy test,” adding, “those of us who choose the middle of the road will only get hit by a car.”

You might be asking right now: Who is Kristen Henderson and what is Antigone Rising? In my opinion, this question being asked illustrates a musical crime. Antigone Rising (AR) is still around and still amazing. Most are tempted to perceive AR solely as an “all-girl” outfit and I suppose that’s the root of their obscurity. In their original form, they were easily my favorite band of the 2000’s. Kristen is a founding member -- playing rhythm guitar and sometimes drums while singing harmonies. Other band members at the time were Cassidy Catanzaro (lead vocals), Anne-Marie Stehn (bass), Dena Tauriello (drums), and Kristen’s older sister, Cathy, as lead guitarist extraordinaire.

They blended harmonies with power chords to write anthemic rock songs, recorded them with originality and proficiency, and then there were the live performances. AR on stage was an unforgettable and communal experience. Spontaneous hijinks, epic jam sessions, choice cover songs, and an authenticity that so deeply connects them with fans that it would be more accurate to call them friends.

But “chick bands” rarely get noticed -- never mind rich and famous. Back in the days before social media, AR was like a whispered secret among a select few. Like a posse of mythical gunslingers in the old West, the band members became underground legends -- long before YouTube removed most of the mystery from our lives.

Mickey Z.: What didn’t happen that you expected to happen?

Kristen H.: Do you have all day? I expected everything and got nothing. It’s when I stopped expecting and started being that I got what I expected.

I first heard about Antigone Rising in late 2000 from Michele, my partner and wife at the time. One of her co-workers burned a CD, passed it on, and she was hooked. It took longer for me -- mostly because I was a rock music know-it-all back then. I’ve been fortunate enough to see bands like the Stones, Led Zep, Queen, etc. in their 1970s primes so I fancied myself some kind of “expert.” But when Michele brought me to see AR live at Maxwell’s in Hoboken, my pretentiousness vanished on the spot.

We became super fans. I can’t even remember how many times we saw AR live but it was at least 25! The band had a huge and committed female fanbase, loyalists who followed the band all over the northeast United States. I was honored and flattered to be accepted in this awesome, way-cooler-than-Deadheads club. In fact, Michele and I were once called on stage to compete in a “best fan couple” contest (I may or may not still have the t-shirt).

My standing in the AR scene was seriously boosted when I interviewed Kristen and Cassidy for Wide Angle -- an Astoria-based newspaper and website for which I served as Senior Editor. (Interview excerpts throughout this article.)

Mickey Z.: How long has AR been together?

Kristen H.: We’ve always been together. In our last life, the five of us were probably fighting battles against evil warlords. Actually, wait a minute… that’s this lifetime.

On Valentine’s Day 2003, Michele and I drove all the way to Northampton, Massachusetts, to see AR at the Iron Horse Music Hall. After checking in at our (non-air) BnB, we opted to do some browsing in a huge secondhand shop around the corner from the venue. By fortunate coincidence, Kristen and Cassidy had just entered the shop to do some browsing of their own. Michele was starstruck -- did I mention the massive crush she had on Cassidy? Since I had already started emailing with both band members about our planned interview, I felt comfortable introducing myself. Plus, I was cockier in those days.

Anyway, within 30 seconds, the four of us were chatting and laughing like old friends. The conversation eventually led to them revealing that two new songs-in-progress would be debuted that evening. One of those songs was “Buying Bridges.”

Mickey Z.: What question do you always wish a journalist would ask but never does?

Kristen H.: Do you mind if we keep this short?

Fast forward to late March 2003 at the infamous Village Underground in New York City. I walk in carrying an armful of Wide Angle newspapers -- with AR on the cover! It was a magical experience to give ‘em out to my fellow hardcore fans while saving a big batch for the band and their families.

A little later, during the show, I was standing (swooning?) on Kristen’s side of the stage as they broke into “Buying Bridges” -- only the second time I’d heard the song. I was doing my best to discern the lyrics so I could sing along with everyone else. Towards the end, there was an upbeat refrain that had the entire audience bouncing. They sang a syncopated version of the word “change” (e.g. “chay-chay-ch-ch-change”) followed by another line. I sang the “chay-chays” but found myself desperately trying to lip-read Kristen to get the next few words.

After two times around the refrain, I got a tap on the shoulder. A very happy and sweaty young woman -- a regular AR fan I’d seen at shows -- stopped her dancing long enough to whisper in my ear: “Like the seasons, too, we must change.”

She’d seen me struggling and as part of the AR community empowered me to join the collective fun. But it felt like more than that. In a jam-packed, raucous concert, we locked eyes and shared a wonderful smile. It felt like we were furtively exchanging a secret handshake while meditating upon a gentle reminder that, well… everything does and must change.

I thanked her, sang my heart out, and that night, basked in the glow of being “the guy who got AR their first cover story.” I was present and happy and grateful and in the moment, because, after all, like the seasons, things were gonna change. 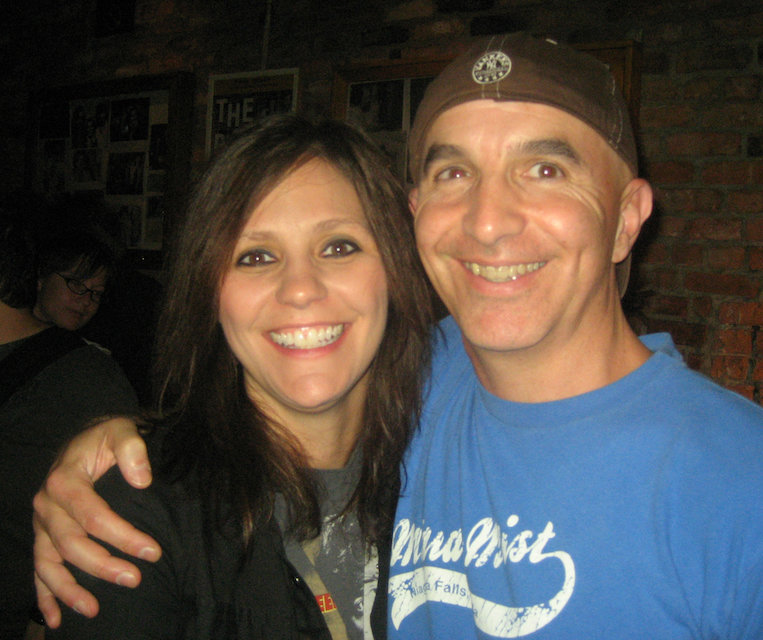 Mickey Z.: Where do you see the band next year at this time?

Mickey Z.: What about five years from now?

I’m not sure how accurate Kristen was with her five-year prediction (FYI: Cassidy left the band before then). But like the seasons, she has certainly changed. Please allow me to introduce an excerpt from her bio: Kristen married Sarah Kate Ellis (President/CEO of GLAAD) on October 22, 2011. Their wedding was the first performed in the Episcopal Church of New York after marriage equality passed in the New York State Senate in June of that year. Kristen and Sarah were featured in a special New York Times Style section devoted to marriage equality on the day it became legal in New York State (July 24, 2011).

Kristen and Sarah Kate got pregnant on the exact same day in May 2008, and both gave birth in February 2009; Kristen to their son, Thomas, and Sarah to their daughter, Kate Spencer. They wrote a memoir about the experience. Times Two, Two Women in Love and the Happy Family They Made was published in April 2011 by Free Press, an imprint of Simon & Schuster. In March 2013, the couple was chosen by Time Magazine to appear on the now infamous "Gay Marriage Already Won" issue, leading to a national media blitz that included appearances on CNN, Real Time with Bill Maher, and Chris Matthews Hardball.

Then, of course, there’s Girls Rising, a nonprofit formed by AR to inspire young girls and LGBT youth to pursue non-traditional career paths.

And, oh yeah… Kristen is still a touring musician.

(P.S. This article did not do justice to the full breadth of the band’s ongoing efforts. Learn lots more about AR here.)

Coda: Michele and I changed like the seasons, too. We’re no longer married but we remain uniquely bonded as friends. As AR once sang, “It feels she's got your pulse under her thumb” (and yes, of course, I asked for her permission before publishing this article). #zun

Like the seasons, too, we must change… by Mickey Z. is licensed under a Creative Commons Attribution-ShareAlike 4.0 International License.
Based on a work at https://worldnewstrust.com/like-the-seasons-too-we-must-change-mickey-z.