Light It Up | James Howard Kunstler

Grinning like Wonderland’s Cheshire Cat, the Golden Golem of Greatness pronounced this interval of fine fall weather “the calm before the storm.” Hmmmm. Talk about cryptic. This was less than a week after he verbally smacked down Secretary of State Rex Tillerson for “wasting his time” trying to diplomatically reach “Little Rocket Man… “ whereby Rex riposted, calling the President a “moron.”

Ordinarily -- say, during the past 220-odd years of this nation’s existence -- talk like that would prompt a resignation (though, there are no other instances of talk like that). Tillerson must think that for the good of the country he can’t resign, and God knows what kind of desperate notes are being swapped around between the State Department and the Pentagon.

Where, of course, dwell the generals, lovingly referred to by the president as “my generals,” as if they came out of a trunk full of tin soldiers in the White House play-room. A lot to chew on there. For instance, perhaps the generals have been waiting more than a half century for a good excuse to light up some really odious adversary, just to see how well our serious ordnance works. Or maybe not. Maybe they are all extraordinarily temperate and judicious fellows, averse to apocalyptic violence. Or maybe they are panting to be let off the leash by POTUS... or maybe they want to leash and muzzle the president... and perhaps stuff him into a pet carrier and drown him in the Potomac. For the moment, it’s fun to ruminate on these things, the possibilities are so rich.

But then, we’re told that this is the calm before the storm. As it happens, just this morning the National Hurricane Center has a storm called “Nate” aimed squarely into New Orleans, ETA Sunday. Now that would be an event the USA does not need, considering how things have gone weather-wise this year. Stand by for developments. 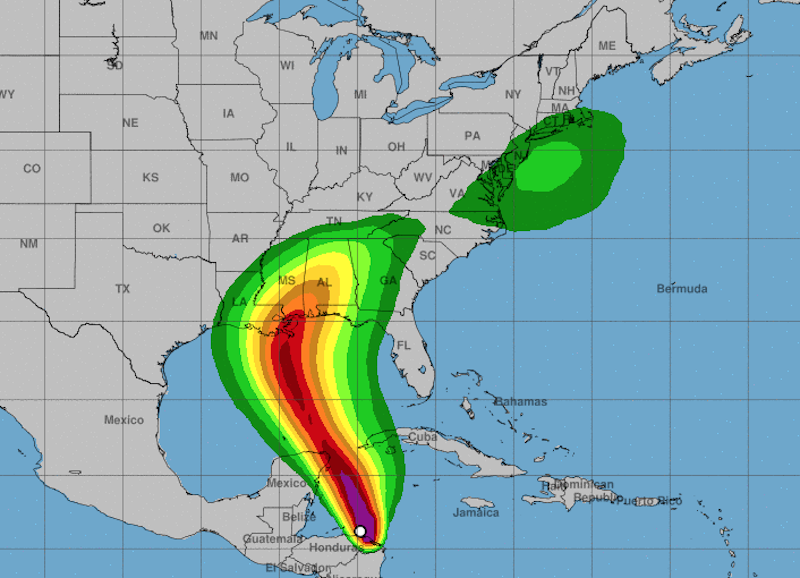 But I doubt the president was referring to that the other day. We are entering a slot of time where an awful lot of things might go wrong. What gets me is seeing the stock markets make new record highs every other day, whether Puerto Rico is destroyed overnight or hundreds of people are shot in a Las Vegas parking lot -- and notwithstanding the overall phony-baloney condition of the American economy, with half of the flyover population in an opiate daze, and chain-stores shuttering to the tune of 10,000 this year, and car leases expiring into a car market dependent on liar loans bundled into janky securities, and the debt problem festering away like a something dead under the floor boards.

Some kind of financial accident with a this-sucker-is-going-down flavor feels like it’s waiting to happen. I don’t think Trump was referring to that either, but what if it came down around the same moment that we decided to light up North Korea? Or, alternately, if Rex Tillerson, Mike Pence, and a score of other senior politicos decide that its time for Trump to go? The president is looking mighty friendless these days, and more than a little reckless. I mean, for the good of the country, ladies and gentlemen, what are they waiting for?

Will his generals defend him? Nah. Fuggedabowdit. I wonder what the code-name for their action will be. Operation Moron Overboard? The whole spectacle is starting to look like a Coen Brothers movie. When the time comes, I hope they will make the documentary about these strange days of October, 2017.