Life After Debt: We Don't Need Your Education | Mickey Z. 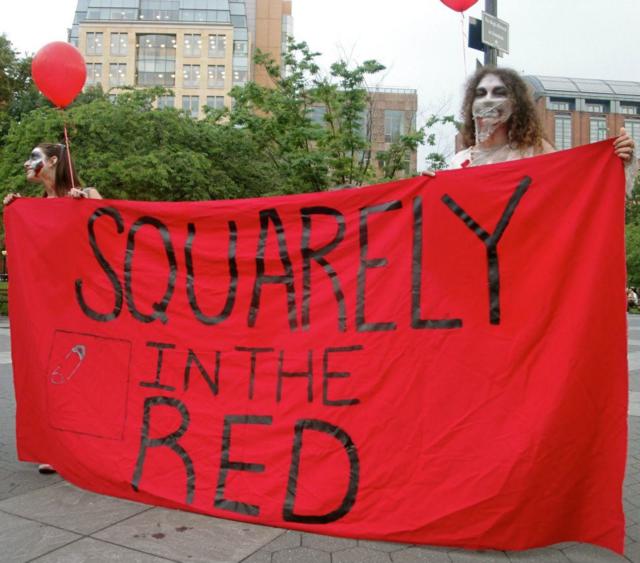 “Usually when you ask somebody in college why they are there, they'll tell you it's to get an education. The truth of it is, they are there to get the degree so that they can get ahead in the rat race.... The only reason you should be in college is to destroy it.” --Abbie Hoffman

One of most high profile commonalities across all current global uprisings is the issue of student debt. For example, on June 28, an estimated 150,000 people marched in Chile to protest education costs and profiteering. (On so many levels, this is incredibly encouraging news -- especially when viewed as a means to a far more universal end.)

The standard mainstream comeback on the topic of student debt goes a little something like this: "Why did they take out the loans in the first place?" While I will soon attempt to prove that a variation of this question has serious merit, this version is steeped in denial. Here's why:

An enduring myth of any profit-based culture is that must all strive and sacrifice in order to "pay our dues" and end up in position to ascend within the dominant hierarchy. Go to school, get a degree, and find a job at which you will earn enough money to eventually pay back your loans (with major interest, of course) and go on to become a "productive" member of society.

As Occupy Wall Street and other related movements have demonstrated, this façade is easily cracked. Students now buried under mountains of debt were sold a bill of goods and most stand little chance of ever obtaining such a job and/or living the life they were promised. It was a bait and switch with indentured servitude presented as the "only" path out.

Lose-Lose Paradox: If you buy into the myth being marketed (education as the path to the American dream) and complain when you finally recognize the depth of the charade, you're mocked for lack of foresight. Then again, if you don't play by the rules and you choose not to follow the predetermined game plan (school-job-house-family-retirement), well... you're mocked for lack of foresight.

However, the difference between winning and losing is often perception…

“I had a wholesome dread of the consequences of running in debt.” --Frederick Douglass

Education loans, of course, are not the only form of debt handcuffing tens of millions across the globe. As the "Strike Debt" group explains: "We all have debt. Student debt, mortgage debt, health care debt, credit-card debt, and more: debt is the tie that binds the 99%, and it is a primary engine of Wall Street profits."

Mic Check: While I'd agree with most of the second sentence, that opening line is a dangerous fabrication. Not all of us have debt and that's no accident. Whenever possible, the path of not accumulating debt can and should be used as a radical and effective tool for challenging the 1%.

The Occupy Student Debt Campaign, launched at Zuccotti Park in November 2011 with the goal of "building a student debt abolition movement," has based their campaign on the following principles:

Let's first address principles 1-2-3, lumped together: If all forms of education were made free or available through interest-free loans and all current student debt relieved tomorrow, yeah, it would offer much-needed financial relief to many but what would it truly accomplish in terms of actual education?

Even if it were free -- even if they paid you to go to school, for that matter -- the current system isn't worth salvaging. The education industry doesn't exist to nurture critical thought. It exists primarily to create obedient workers for all those "good jobs" we're promised.

Mic Check: Exactly what job would you suggest for a socially aware and compassionate human?

Capitalism is an economic system based on perpetual growth and the relentless exploitation of what we've come to call "natural resources." By definition, such an approach is unsustainable and cannot be reformed. Thus, most jobs within such a lethal system directly or indirectly contribute to the looming ecocide.

This brings me back the mainstream retort I detailed above: "Why did they take out the loans in the first place?"

Student debt is merely a symptom -- a ghastly symptom not unlike an oozing tumor, but a symptom nonetheless. Covering the tumor with a band-aid may assuage some but the cancer will continue to spread until holistic action is taken.

Returning to the fourth principle above ("the elimination of current student debt, through a single act of relief"), please allow me to suggest a couple of basic "acts of relief" we can each execute right now without begging the 1% for crumbs.

All of these would serve to smash the current system of for-profit programming -- I mean... education -- while striking a debilitating blow to the entire commodity culture.

"As you simplify your life, the laws of the universe will be simpler; solitude will not be solitude, poverty will not be poverty, nor weakness weakness.... Sell your clothes and keep your thoughts." --Henry David Thoreau

Trade your job (or your hyper-expensive educational quest for a job) for an occupation -- a setting where you can be both teacher and student without helping to preserve a system based on conformity and indentured servitude.

Mic Check: The education industry -- at any cost -- is not worth rescuing.

To all those motivated occupiers inspired to action by the looming specter of paralyzing student debt, I'd suggest something far more productive and exhilarating than riling up local cops on weekly marches: Abandon the universities and colleges, default on your loans, opt out of the consume-and-dispose culture, and connect with others to form learning collectives and alternative communities.

While the dominant hierarchy drowns in its own hypocrisy, fear, and greed, let's use our energy and passion to create -- and occupy -- a whole new model. It just may be our last chance to create a softer place to land.