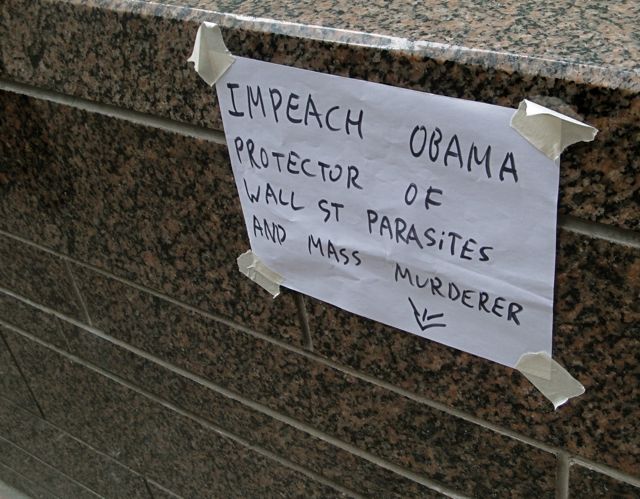 "You don't stick a knife in a man's back nine inches and then pull it out six inches and say you're making progress." --Malcolm X

I feel the need to publicly declare such support because every four years, the soft Left (and more than a few radicals) gleefully guzzle the Democrat Kool Aid. In 2004, it was “Anybody-But-Bush.” Four years ago, it was “Hope and Change.” It seems when you’re a liberal, harboring multiple delusions comes with the territory, for example:

I could provide bushels of examples of how Obama is as much a Wall Street-funded, ecocide-promoting war criminal as Dubya was, and Romney will be, but what I’d get in response would be the robotic repetition of two words: Supreme Court.

No, the Libs are not pointing out how -- for example -- the Pope of Hope asked the Supreme Court to block the release of photos of military detainees. Rather, after the robotic repetition subsides, I’d get a misguided lecture about Democrats allegedly protecting women and people of color (POC) via the justices they appoint.

All this culminates in a personal attack as I’m told white men like me just don’t/can’t get it and my efforts to expose the two-party deception only expose something else: my sexism/racism.

“Lately I’ve been hearing a lot of American women eagerly throw their support behind the Obama administration, especially in recent weeks with multiple blatant assaults by the GOP on women’s rights,” writes Nicole from The Funky Revolutionary. “But if my president supports that women in other nation states live in situations of violence, oppression, and hate, and even furthers these situations, it is all but impossible to deduce that this individual cares about women’s rights at all. Where is our global solidarity? Women after all, exist all across the globe. Our social class transcends party politics.”

Mic Check: Even if it were true that Democrats occasionally seek to safeguard the rights of women and POC in the United States -- and it’s not -- how could this balance out all the documented damage someone like Obama does on a daily basis across the globe?

If Mr. Yes We Can cared about poor women, why does he have them murdered in Libya, Afghanistan, Iraq, Yemen, and too many more places? Can any of you liberals explain to me why Obama’s alleged support for women doesn’t manifest itself for those oppressed and killed in, say, Gaza and Saudi Arabia -- thanks to his unfailing support for “allies”?

More from The Funky Revolutionary: “To support the Obama administration (especially through a vote) is to support an administration that knowingly and willingly kills and injures women through both military regime and economic enslavement, and supports the oppression of women as workers, mothers, and autonomous beings with autonomous bodies.”

Do not women and POC suffer terribly thanks to realities like the USA PATRIOT Act, the Wall Street bailout/corporate welfare, the death penalty, corporate personhood, and allowing GMOs to be sold without labels? All of these nightmares exist with the overt support of Obama and his party... but I’m the one who doesn’t “get it”?

When a woman is raped every 46 seconds in the home of the brave, voting for a lesser (sic) evil isn’t progressive. It’s denial.

“By voting for Obama and for the Democrats, we will endure the expansion of corporate power and militarist imperium; by voting for Romney and the Republicans, we will endure the same,” explains Phil Rockstroh. “The social issues are sideshows to scare partisan types into staying in line. Obama is committed to women's and gay rights to the same degree that Romney is against the concepts. Neither could give a rodent's rectum: Their positions on these issues are only a cynical means to power. Their resolve remains committed to the agendas of the economic elite of the One Percent.”

Even if there was a chance that Obama would be making a Supreme Court appointment in his second term and there was an even slimmer chance that he’d nominate someone who cared a tiny bit about the issues facing poor women and POC and there was a infinitesimal chance that such an appointee was actually approved by Congress, how could this theoretical scenario justify anyone’s vote for a man dedicated to policies that are systemically killing all life on earth?

How valuable would that hypothetical SCOTUS justice be during an economic, social, and environmental collapse? How would this mythical voice of the people even be heard over the screams of a dying ecosystem?

I could on for days documenting how our way of life is, by definition, unsustainable and hence, anti-life.

I could share Obama’s own words from his inauguration speech: “We will never apologize for our way of life nor will we waver in its defense.”

I could marshal evidence from now 'till doomsday, but I’d still hear some variation of this pathetic pretext: “Sure, Obama is horrific (pause for effect) but he’s still better than Romney.”

Mic Check: This is a glimpse into the mind of the enabler.

As with the actions of abusive partners, parents, etc. everywhere, the sociopathic style of the Democrats often inspires such classic enabling behavior as:

As Rockstroh adds: “Obama and Romney are both two-legged tools of oligarchy, and by voting for either of them you become agents of your own oppression.”

If (for the sake of false argument) Obama’s policies were a tad more beneficial to U.S. women than Romney’s policies but both were equally as murderous for women elsewhere, how would support for Obama be the radical choice, the path to genuine social change?

“I refuse to sing the praises of a man because a situation is more advantageous to me. Such a situation begets extreme violence, strife, and oppression of women globally,” adds Nicole at The Funky Revolutionary. “To turn our backs on these women and claim victory while others are in chains is fraudulent. Those women do not have the same privileges, yet they have historically fought vehemently for their rights, many times against the United States among their own state apparatuses.”

I repeat: Even if there was a chance that Obama would be making a Supreme Court appointment in his second term and there was an even slimmer chance that he’d nominate someone who cared a tiny bit about the issues facing poor women and POC and there was a infinitesimal chance that such an appointee was actually approved by Congress, how could this theoretical scenario justify anyone’s vote for a man dedicated to policies that are systemically killing all life on earth?

For more context on the two-party farce, please read and share my two recent articles: