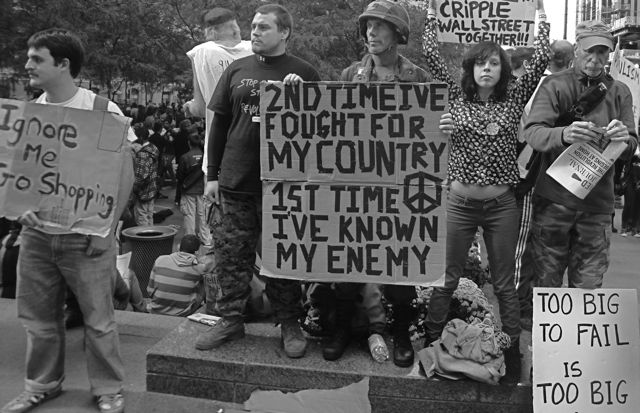 "War is manufactured by political leaders, who then must make a tremendous effort -- by enticement, by propaganda, by coercion -- to mobilize a normally reluctant population to go to war."

Alexander Cockburn once called D-Day a “sideshow,” explaining that World War II had already been won “by the Russians at Stalingrad and then, a year before D-Day, at the Kursk Salient, where 100 German divisions were mangled. Compared with those epic struggles, D-Day was a skirmish … Hitler’s generals knew the war was lost, and the task was to keep the meeting point between the invading Russians and Western armies as far east as possible.”

Of course, this doesn’t fit the “Good War” myth (more than just a good war, propagandist Tom Brokaw has deemed WWII “the greatest war the world has seen”), so it’s shoved down the memory hole.

I say seven decades of disinformation is more than enough…

The adjective and noun don’t match
Faced with both our own perpetual war against evil and an ever-intensifying wave of global activist uprisings, the time has never been better to challenge the “greatest generation” bullshit.

The next time someone you know speaks of WWII in hallowed tones, remind them that:

The enduring Good War fable goes well beyond Memorial Day barbecues and flickering black-and-white movies on late night TV. WWII is America’s most popular war. According to accepted history, it was an inevitable war forced upon a peaceful people thanks to a surprise attack by a sneaky enemy.

This war, then and now, has been carefully and consciously sold to us as a life-and-death battle against pure evil. For most Americans, WWII was nothing less than good and bad going toe-to-toe in khaki fatigues.

But, Hollywood aside, John Wayne never set foot on Iwo Jima. Despite the former president’s dim recollections, Ronald Reagan did not liberate any concentration camps. And, contrary to popular belief, FDR never actually got around to sending our boys “over there” to take on Hitler’s Germany until after the Nazis had already declared war on the United States first.

The A Word
American lives weren’t sacrificed in a holy war to avenge Pearl Harbor nor to end the Nazi Holocaust. WWII was about territory, power, control, money, and imperialism. What we’re taught about the years leading up to the Good War involves the alleged appeasement of the Third Reich. If only the Allies were stronger in their resolve, the fascists could have been stopped.

But it wasn’t appeasement that took place prior to WWII. It was, at best, indifference; at worst it was collaboration -- based on economic greed and more than a little shared ideology.

U.S. investment in Germany increased more than 48 percent between 1929 and 1940, while declining sharply everywhere else in Europe. All of these businesses were more than happy to see the German labor movement and working-class parties smashed and for many of these companies, operations in Germany continued during the war (even if it meant the use of concentration-camp slave labor) with overt U.S. government support.

“Pilots were given instructions not to hit factories in Germany that were owned by U.S. firms,” writes Michael Parenti. “Thus Cologne was almost leveled by Allied bombing, but its Ford plant, providing military equipment for the Nazi army, was untouched; indeed, German civilians began using the plant as an air raid shelter.”

Yes, the pursuit of profit long ago transcended national borders and loyalty. Doing business with Hitler’s Germany or Mussolini’s Italy (or, as a proxy, Franco’s Spain) proved no more unsavory to the captains of industry than, say, selling military hardware to Indonesia does today.

Wall Street has always been War Street
An illustrative example of how the 1% is loyal only to the 1% is International Telegraph and Telephone (ITT). This multi-national conglomerate was founded by Sosthenes Behn -- an unabashed supporter of the Führer even as the Luftwaffe was bombing civilians in London -- and was responsible for creating the Nazi communications system, along with supplying vital parts for German bombs.

According to author Jonathan Vankin, “Behn allowed his company to cover for Nazi spies in South America, and one of ITT’s subsidiaries bought a hefty swath of stock in the airline company that built Nazi bombers.”

Behn himself met with Hitler in 1933 (the first American businessman to do so) and became a double agent of sorts. While reporting on the activities of German companies to the U.S. government, Behn was also contributing money to Heinrich Himmler’s Schutzstaffel (SS) and recruiting Nazis onto ITT’s board.

In 1940, Behn entertained a close friend and high-ranking Nazi, Gerhard Westrick, in the United States to discuss a potential U.S.-German business alliance -- precisely as Hitler’s blitzkrieg was overrunning most of Europe and Nazi atrocities were becoming known worldwide.

In early 1946, instead of facing prosecution for treason, Behn ended up collecting $27 million from the U.S. government for “war damages inflicted on its German plants by Allied bombing.” At that juncture, Behn was in the perfect position to lobby President Truman concerning the newly formed Central Intelligence Group (CIG).

Meeting with the chair of the Joint Chiefs of Staff, Admiral William D. Leahy, in the White House, Behn, as recorded in Leahy’s diary, generously offered for consideration “the possibility of utilizing the service of (ITT’s) personnel in American intelligence activities.”

Meanwhile, Sullivan and Cromwell was the most powerful Wall Street law firm of the Good War era. John Foster Dulles and Allen Dulles -- the two brothers who guided the firm; the same two brothers who boycotted their own sister’s 1932 wedding because the groom was Jewish -- served as the contacts for the aforementioned I.G. Farben (the company that put the gas in gas chambers).

During the pre-war period, the elder John Foster Dulles led off cables to his German clients with the salutation “Heil Hitler,” and he blithely dismissed the Nazi threat in 1935 in a piece he wrote for the Atlantic Monthly. In 1939, he told the Economic Club of New York, “We have to welcome and nurture the desire of the New Germany to find for her energies a new outlet.”

“Hitler’s attacks on the Jews and his growing propensity for territorial expansion seem to have left Dulles unmoved,” writes historian Robert Edward Herzstein. “Twice a year, (Dulles) visited the Berlin office of the firm, located in the luxurious Esplanade Hotel.”

Ultimately, it was little brother Allen who actually got to meet the German dictator, and eventually smoothed over the blatant Nazi ties of ITT’s Sosthenes Behn. “(Allen) Dulles was an originator of the idea that multinational corporations are instruments of U.S. foreign policy and therefore exempt from domestic laws,” Vankin writes.

Old wine, new bottles
When the Nobel Peace Prize winner Barack Obama drones on about terror and freedom and justifying murder, he’s merely selling old wine in a new bottle. The first step toward smashing that bottle is to “just say no” to the enduring myths.

The 20th century has been called the century of genocide, but it was also a century of propaganda (partially to justify the genocide). In 2013, little has changed in the way foreign interventions are aggressively packaged and sold to a wary public -- except the technology by which the lies are disseminated.

More than 100 years ago, anarchist Emma Goldman described the national mood at the beginning of the Spanish-American War:

"America had declared war with Spain. The news was not unexpected. For several months preceding, press and pulpit were filled with the call to arms in defense of the victims of Spanish atrocities in Cuba. It did not require much political wisdom to see that America's concern was a matter of sugar and had nothing to do with humanitarian feelings. Of course there were plenty of credulous people, not only in the country at large, but even in the liberal ranks, who believed in America's claim."

If the working class is kept unaware of what is being done in their name, rebellion is unlikely. If the average citizen in inundated with images designed to demonstrate that the U.S. government has always acted in a benevolent manner, rebellion appears unnecessary. If the liberals willingly swallow the lies, they are part of the problem.

As a result, justification is crucial for those in power.

Thus, it is our moral obligation to see through our own propaganda and kick the addictive habit of lazy thinking. We must address the many uncomfortable truths about WWII by recognizing the public relations and media propaganda used by Western corporate states to transform a conflict between capitalist nations into a holy crusade.

Shift happens
In 1941, revolutionary pacifist A.J. Muste declared, “The problem after war is with the victor. He thinks he has just proved that war and violence pay. Who will now teach him a lesson?”

Precisely how and when such a lesson will be taught is not known, but it can be safely assumed that this lesson will never be learned from standard college textbooks, insipid bestsellers, or manipulative box office smashes.

The past 69 years have also shown that without such a lesson, there will be many more wars and many more lies told to obscure the truth about them.

Calling war "possibly the oldest, easily the most profitable, sure the most vicious" racket of all, infamous U.S. Marine Brigadier General Smedley D. Butler declared (back in the 1930s): "It is the only (racket) in which profits are reckoned in dollars and losses in lives … I spent 33 years being a high-class muscle man for Big Business, for Wall Street and the bankers. In short, I was a racketeer for capitalism."

Ending the war spin cycle begins with each of us deciding we will no longer buy what’s being sold. If we debunk the “Good War” myth, the tenets behind the “War on Terror” will crumble.

Thousands upon thousands of racketeers for capitalism have unintentionally helped lay the foundation for a well-informed global movement with passion, endurance, and diversity. These criminals have brought us to the brink so we must complete the task of bringing down the system that spawned them while cultivating new models of human culture.

In order for all species -- and the ecosystem itself -- to survive, Wall Street must be permanently dismantled. There is no middle ground.

The time has come to choose: Which side of history are you on?