Journalists Are Not The Enemy | Boston Globe Editorial Board 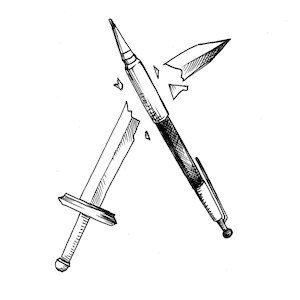 Source: celebrationscakedecorating.comAug. 15, 2018 (Boston Globe) -- A central pillar of President Trump’s politics is a sustained assault on the free press. Journalists are not classified as fellow Americans, but rather “the enemy of the people.” This relentless assault on the free press has dangerous consequences. We asked editorial boards from around the country -- liberal and conservative, large and small -- to join us today to address this fundamental threat in their own words.

Replacing a free media with a state-run media has always been a first order of business for any corrupt regime taking over a country. Today in the United States we have a president who has created a mantra that members of the media who do not blatantly support the policies of the current U.S. administration are the “enemy of the people.” This is one of the many lies that have been thrown out by this president, much like an old-time charlatan threw out “magic” dust or water on a hopeful crowd.

For more than two centuries, this foundational American principle has protected journalists at home and served as a model for free nations abroad. Today it is under serious threat. And it sends an alarming signal to despots from Ankara to Moscow, Beijing to Baghdad, that journalists can be treated as a domestic enemy.

The press is necessary to a free society because it does not implicitly trust leaders — from the local planning board to the White House. And it’s not a coincidence that this president -- whose financial affairs are murky and whose suspicious pattern of behavior triggered his own Justice Department to appoint an independent counsel to investigate him -- has tried so hard to intimidate journalists who provide independent scrutiny.