Jimmy Carter: Just Like All the Rest | Mickey Z. 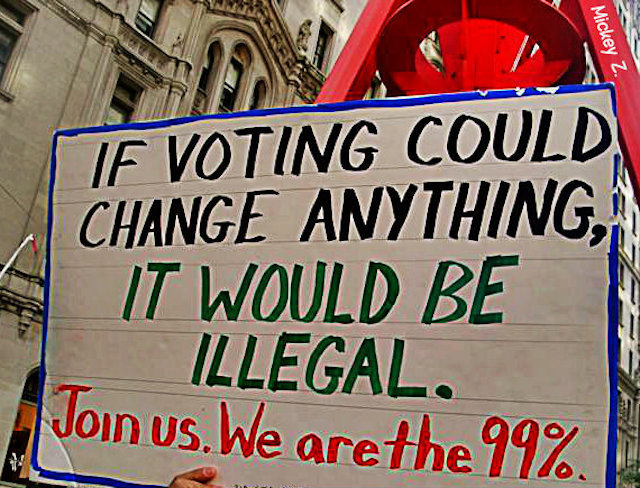 Former president Jimmy Carter recently revealed he’s been diagnosed with cancer, so please let me clarify: this is not an article designed to kick anyone when they’re down or celebrate such a diagnosis for anyone. On the contrary, I wish him well in his journey through the cancer industry.

So, why am I choosing this particular time to address the Carter hagiography?

Well, firstly, he’s back in the news and that means the whitewashing in is full effect -- and with Bernie Sanders currently riding the latest wave of liberal delusion, it’s as dangerous as ever to ignore historical reality.

Also, when even an anti-TransPacific Partnership (TPP) page is misrepresenting Carter’s record, it’s time to provide context before anyone else lionizes him -- or any Democrat.

Soul Man
During the Carter Administration, the United States had a president who claimed that human rights was "the soul of our foreign policy" despite making an agreement with Baby Doc Duvalier to not accept the asylum claims of Haitian refugees. His duplicity, however, was not limited to our hemisphere; Carter also started earning his Nobel Peace Prize in Southeast Asia.

In Cambodia, the sainted Carter and his national security aide, Zbigniew Brzezinski, made an untiring effort to find peaceful solutions by initiating a joint U.S.-Thai operation in 1979 known as Task Force 80, which for 10 years, propped up the notorious Khmer Rouge under the all-purpose banner of anti-Communism.

Interestingly, just two years earlier, Carter displayed his deep respect for human rights when he explained how the United States owed no debt to Vietnam. He justified this belief because the "destruction was mutual." (Hmm… do any of you recall being bombarded with napalm and/or Agent Orange?)

Moving further southward in Carter’s efforts to advance democracy and human rights, we have East Timor. This former Portuguese colony was the target of a relentless and murderous assault by Indonesia since Dece. 7, 1975... an assault made possible through the sale of U.S. arms to its loyal client-state, the silent complicity of the American press, and then-Ambassador Daniel Patrick Moynihan's skill at keeping the United Nations uninvolved.

Upon relieving Gerald Ford -- but strategically retaining the skills of fellow Nobel peacenik Henry Kissinger -- Carter authorized increased military aid to Indonesia in 1977 as the death toll approached 100,000. In short order, over one-third of the East Timorese population (more than 200,000 humans) lost their lives due to war-related starvation, disease, massacres, or atrocities.

Closer to home, Carter also bared his gentle soul in Central America: As William Blum details, in 1978, the former peanut farmer attempted to create a "moderate" alternative to the Sandinistas through covert CIA support for "the press and labor unions in Nicaragua." After the Sandinistas took power, Blum explains, "Carter authorized the CIA to provide financial and other support to opponents." Also in that region, one of Carter's final acts as president was to order $10 million in military aid and advisors to El Salvador.

A final glimpse of "international co-operation based on international law" during the Carter Administration brings us to Afghanistan, site of a Soviet invasion in December 1979. It was here that Carter and Brzezinski aligned themselves with staunch anti-Communists in Saudi Arabia and Pakistan to exploit Islam as a method to arouse the Afghani populace to action.

With the CIA coordinating the effort, some $40 billion in U.S. taxpayer dollars were used to recruit "freedom fighters" like (wait for it) Osama bin Laden.

The rest, as they say, is history.

“Least Violent”
Was Jimmy Carter, as Chomsky once said, “the least violent of American presidents”? Perhaps. But have our standards dropped to the point where we meticulously rank the criminals who inhabit the White House? Will we ever eschew electoral deceptions and instead recognize and accept and name the big picture problems, e.g. white supremacy, capitalism, male supremacy and Male Pattern Violence?

To paraphrase something I recently wrote: If you think Jimmy Carter was once the answer or you believe Bernie Sanders is now the answer, you’re asking the wrong questions.

"Jimmy Carter: Just Like All the Rest" by Mickey Z. is licensed under a Creative Commons Attribution-ShareAlike 4.0 International License.
Based on a work at https://worldnewstrust.com/jimmy-carter-just-like-all-the-rest-mickey-z.