Into the Cold and Dark | James Howard Kunstler 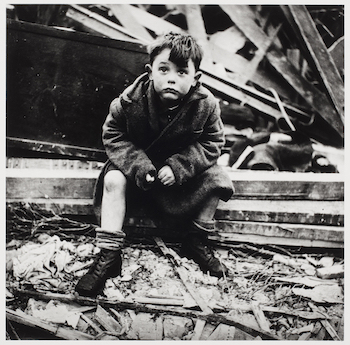 Boy sitting in the rubble of his home where his parents lie buried after a V2 bomb hit, London. Toni FrissellJames Howard Kunstler -- World News Trust

It amuses me that the nation is so caught up in the sexual mischief of a single Hollywood producer when the nation as a whole is getting fucked sideways and upside down by its own political caretakers.

Behind all the smoke, mirrors, Trump bluster, Schumer fog, and media mystification about the vaudeville act known as The Budget and The Tax Cut, both political parties are fighting for their lives and the Deep State knows that it is being thrown overboard to drown in red ink. There’s really no way out of the financial conundrum that dogs the republic and something’s got to give.

Many of us have been waiting for these tensions to express themselves by blowing up the artificially levitated stock markets. For about a year, absolutely nothing has thwarted their supernatural ascent, including the threat of WW III, leading some observers to believe that they have been rigged to perfection. Well, the algo-bots might be pretty fine-tuned, and the central bank inputs of fresh “liquidity” pretty much assured, but for all that, these markets are still human artifacts and Murphy’s Law still lurks out there in the gloaming with its cohorts, the diminishing returns of technology (a.k.a. “Blowback”), and the demon of unintended consequences.

Many, including yours truly, have expected the distortions and perversions on the money side of life to express themselves in money itself: the dollar. So far, it has only wobbled down about 10 percent. This is due perhaps to the calibrated disinformation known as “forward guidance” issued by this country’s central bank, the Federal Reserve, which has been threatening -- pretty idly so far -- to raise interest rates and shrink down its vault of hoarded securities, a lot of it janky paper left over from the misadventures of 2007-2009.

I guess the lesson is that when you have a pervasively false and corrupt financial system, it is always subject to a little additional accounting fraud -- until it’s not. And the next thing you know, you’re sitting in the rubble of what used to be your civilization.

The ever more immiserated schnooks who make up the former middle-class know that their lives are crumbling, and may feel that they’re subject to the utterly overwhelming forces of a cruel destiny generated by a leviathan state that hates and despises them. And, of course, that is exactly why they turned to the Golden Golem of Greatness for salvation.

Alas, Mr. Trump has not constructed a coherent strategy for defeating the colossus of fakery that drives the nation ever-deeper toward the cold and dark. He has a talent for distraction and disruption, though, and so far that gave cover to a whole lot of other people in power who have been able to stand around with their hands in their pockets doing nothing about the sinking state of the nation.

Now, the vaudeville act is coming to a spectacular conclusion as the trappings of Halloween go back in the closet and the pulsating, LED-studded Santas go up on the rooftops. Every ceremony of American life seems drained of meaning now, including the machinations of government over the budget and taxes. The revolution to come out of this frozen swamp of irresponsibility will be the messiest and most incoherent in world history. Nobody will have any idea what is going on outside the geo-storm of failure.

About the only thing one can say for sure is that the American life which emerges from this maelstrom will not look a whole lot like what we’re living in today. I remain serenely convinced that when it finally passes, the air will be fresh again and the sun will shine, and a lot more people will know what is real and what is not.