In These Divided States of America | Mickey Z.

I diligently and happily stayed away from Facebook for years.

But recently, I re-activated. I did so to increase fundraising for my project to help homeless women and to promote/share all the articles I’ve been writing. Also, I thought it might be nice to try making more connections since I’m alone so much in 2020.

The results have been mixed.

Below are three posts I’ve made on Facebook during the past month. They were inspired by some of what I’ve witnessed since my return.

Once upon a time, there was a place…

The people in this place enthusiastically volunteered to quarantine themselves into very specific boxes. They only showed any humanity to people who self-quarantined in very, very, very similar boxes.

Their unity was founded on insulting, mocking, shaming, dehumanizing, and marginalizing anyone who chose different boxes or box groupings.

People in all the box groupings spent their days meticulously searching for evidence that validated their positions. When found, such evidence was joyfully shared with others in their groupings — using it as ammunition against other groups but mostly, reveling in this proof that they alone knew the truth.

As diverse and combative as these groupings were, they shared at least two characteristics:

1. They all believed they were being censored, attacked, and conspired against.

2. Under no circumstance would any of them ever look in the mirror and ask: But what if I’m wrong?

As time passed, the walls of the boxes got thicker and thicker until they could barely hear anything from the outside. This was comforting. It made everyone feel more liberated.

…and they all lived unhappily ever after.

It took me far too long to learn some basic lessons so I thought I’d share: Sometimes, I catch myself. I recognize that I’ve pre-established a narrative — or I’ve let outside forces pre-establish a narrative for me. From there, I knowingly or unknowingly squeeze and mold and shape all incoming evidence to support this inflexible narrative.

It can be very soothing to do this but, ironically, there’s nothing more liberating and enlightening than to flip that process: As objectively as possible, gather and assess information before assuming you comprehend it as a useful and compassionate opinion, value, or belief (do this before you share it on social media).

*Resist the seductive lure of pithy slogans, misleading memes, groupthink, clickbait, overconfident but charismatic randos, and your ego’s desire to be “right.”

*Remain open to reaching counter-intuitive (and initially uncomfortable) conclusions that clash with both your previous perceptions and your current news feed.

*Accept the high probability that some aspect of your current opinion-forming process has been compromised.

It’s been helping me and I highly recommend it. 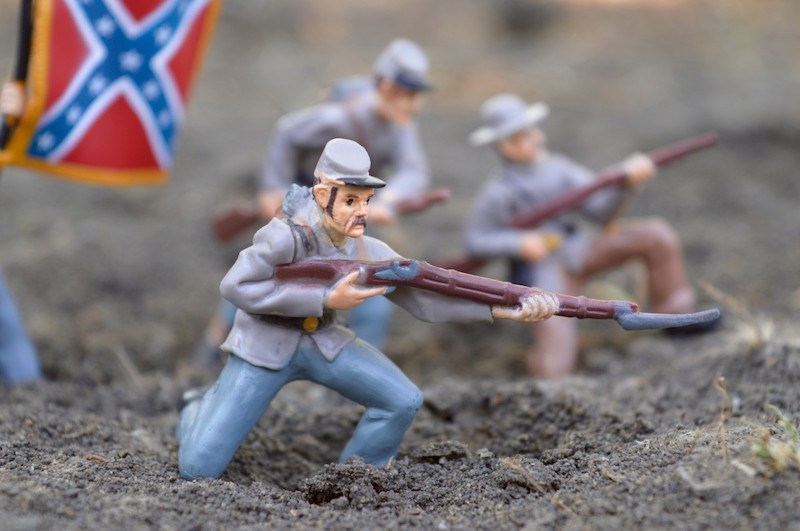 The Civil War was the deadliest conflict in U.S. history. In just four years, roughly 750,000 American soldiers were killed (more than 500 per day, with two out of three dying from disease). That’s more than U.S. casualties than in all other U.S. wars combined.

FYI: U.S. population during the Civil War was only about 34,000,000. Adjusted for population growth, the casualty number for a similar civil war today would approach 7 million.

In a nation as ruptured as it was in 1861, many, many family members went to war against each other. For example, Maryland has two regiments called “1st Maryland Infantry” — one Union, one Confederate. The Confederate Captain William Goldsborough had a brother, Charles, fighting for the Union regiment. William captured Charles and took him prisoner.

There were also two warships called “Virginia” — one on each side. Franklin Buchanan, commander of the Confederate ship, sunk the Union “Virginia” upon which Union Paymaster McKean Buchanan (Franklin’s brother) was killed. Stories like this go on… and on.

Back then, the enemies were Rebels vs. Yankees, North vs. South.

Today, in these Divided States of America, it might be liberals vs. conservatives, anarchists vs. patriots, woke vs. mainstream, covidiots vs. sheeple, Democrats vs. Republicans. Lists like this go on… and on.

Conflict (armed or otherwise) is not an unstoppable force of nature nor some preordained theology. It is the result of human decisions. To end or prevent a conflict, both “sides” have to be willing to regularly ask themselves one question: What if I’m wrong?

Then again… I could be wrong about that.