Below the elevated platform at the Astoria Boulevard/Hoyt Avenue N train station, my neighborhood plays host to Columbus Square — which is actually shaped like a warped triangle. Let Manhattan have its mundane Columbus Circle… we in Queens are far more geometrically sophisticated.

Naturally, a statue of Christopher Columbus adorns this rectangular triangle. As you can see from the photo above, the city has given the bare minimum effort to protect this particular monument from being, um… canceled.

Anyway, if one were to believe sculptor Angelo Racioppi’s rendition, Chris spent plenty of time in the Santa Maria Fitness Club. This statue is pumped. He’s got forearms to die for and a set of pecs that are literally bursting out of his manly shirt.

Yep, Columbus is buff and ready for genocide. 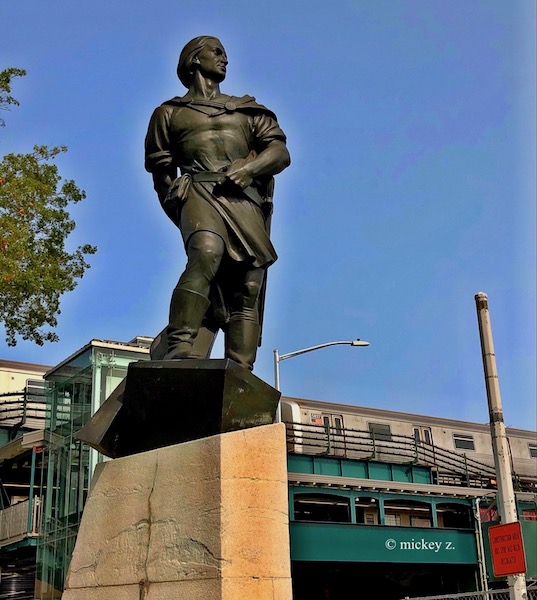 I ponder this statue as we approach yet another Columbus Day — 24 hours set aside to revere Italy’s version of the Terminator. Yeah, even Arnold’s got nothing on Chris “The Continent Cleanser” Columbus.

According to the U.S. Bureau of Indian Affairs, the estimated pre-1492 population of what is now called the United States ranges from 5 to 15 million. By the late 1800s, the number of indigenous people was down to 25,000. Such a holocaust is only possible if the long tradition of dehumanization is utilized as a shield of denial.

“There is a profound historical legacy in the U.S., going back to people like George Washington, for example, describing Indians as ‘wild beasts of the forest’ and ‘savage as the wolf,’” explains Ward Churchill.

Broken treaties (over 400 signed and every single one broken), innumerable massacres (from the deliberate genocide of Powhatans to the slaughter at Wounded Knee), forced marches (e.g. the Trail of Tears relocating the Cherokee Nation from Georgia to Oklahoma), and federally sanctioned dehumanization… the treatment of Native Americans reads like a hideous catalog of crime.

Speaking of hideous crimes, a man by the name of Adolf Hitler took notice of how America’s indigenous people were nearly exterminated in the Home of the Brave™.

Ward Churchill explains how der Führer “used the treatment of the native people — the policies and processes that were imposed upon them — as a model for what he articulated as being the politics of living space.”

In essence, says Churchill, Hitler took the notion of “a drive from east to west, clearing the land as the invading population went and resettling it with Anglo-Saxon stock…as the model by which he drove from west to east into Russia — displacing, relocating, dramatically shifting or liquidating a population to clear the land and replace it with what he called superior breeding stock. He was very conscious of the fact that he was basing his policies in the prior experiences of the Anglo-American population.”

To get a good idea of how and when this got started, let’s contemplate how—upon encountering the Arawak people in 1492 — the venerated Mr. Columbus noted that they “would make fine servants,” adding, “with fifty men we could subjugate them all and make them do whatever we want.”

For that, he gets a day in his honor… and a square triangle. Even if his statue took as convoluted a trip as its hero. Here’s how Forgotten-NY explains that process:

The cast-iron statue was built just before World War II by Italians living in Astoria, but could not be erected because they didn’t have enough money for the statue’s base. The statue was dedicated on October 12, 1941, but, by the fall of 1942, was moved to a city warehouse. Fearing the scrap metal drives of WWII, it was hidden away in the basement of the Queens Borough Hall. In 1945, the statue was reinstalled in its current location. 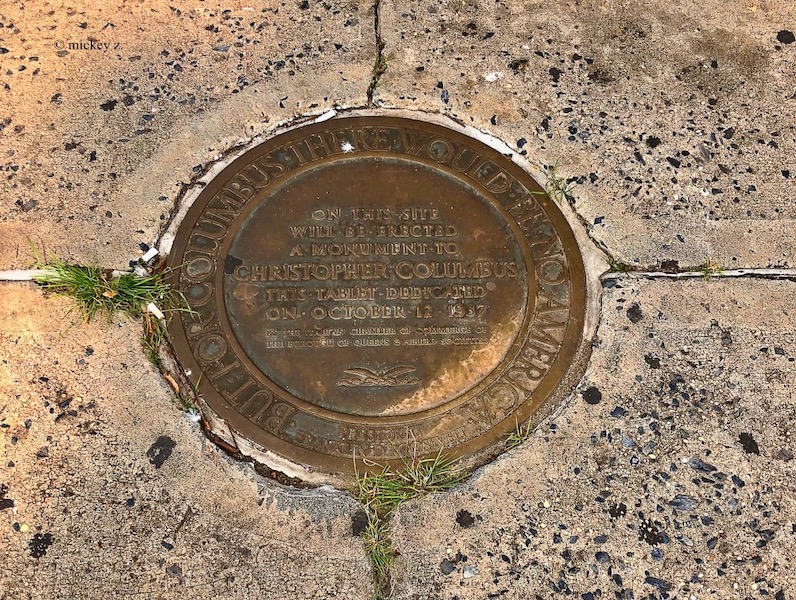 At Columbus Square, an engraved plate (see photo above) on the ground reads: “But not for Columbus, there would be no America.” As I stomp on those intolerable words with my dirt-infested sneakers, I envision that first interaction:

COLUMBUS: Red man, we want your land and everything on it.

INDIAN: But, muscular paleface, what could you possibly offer in return for all these wonders?

COLUMBUS: Hmm, let’s see. How about venereal disease, smallpox, the destruction of your culture, genocide, Christianity, and a really bad image in a bunch of John Wayne flicks?

The Indian starts backing away slowly before taking off in a full sprint.

COLUMBUS: (yells after him) But I promise we’ll toss in some casinos in about 500 years! (Indian keeps running) How’s about I get DiCaprio to walk beside you at the big climate parade one day?