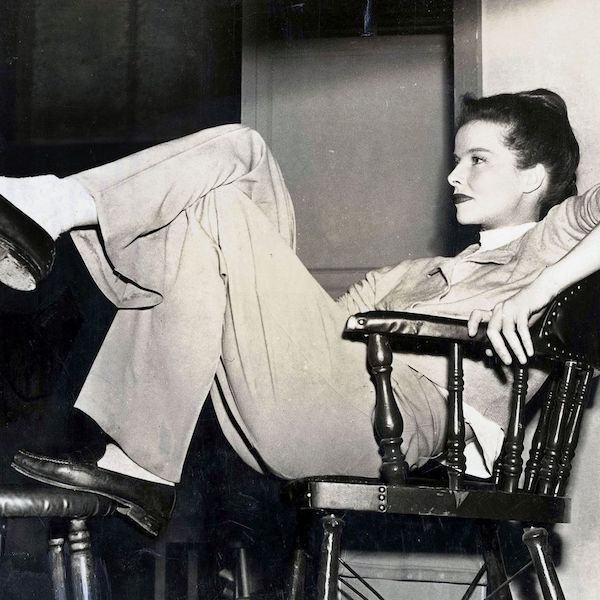 It’s a hallmark of innovation and rebellion that what was once outrageous is eventually mundane. After all, what could more unremarkable than seeing a Western woman wearing a pair of pants?

But when Katharine Hepburn shunned the girdles, petticoats, stockings, garter belts, and high heels considered “normal” for women of her time, she was brazenly defying fashion and social convention. Hepburn wore pants. She even wore sneakers. In 1930s Hollywood, such comportment was deemed scandalous. Elsewhere, it was illegal.

As recently as 2019, it took a federal judge’s ruling to allow girls to wear pants at a North Carolina charter school. The Eastern District of North Carolina rejected the school's argument that its dress code promoted "traditional values" and fostered "mutual respect" between boys and girls. This just in: If a (male) adult deems a girl in a skirt to be a potential “distraction,” the problem lies not with the skirt but with the (male) adult.

Creepy dictates like this came to be thanks to a blend of the “religious” (Deuteronomy 22:5 reads: “A woman must not wear men’s clothing, nor a man wear women’s clothing, for the Lord your God detests anyone who does this.”) and Western culture (men wear pants). Such a patriarchal mindset held sway in the West until a breakthrough in the twentieth century. Case in point:

In November 1938, a kindergarten teacher named Helen Hulick arrived at a Los Angeles courtroom to testify against two burglary suspects. Judge Arthur S. Guerin, noting that Hulick was wearing pants, would not let her testimony. He ordered her to return, but only if she wore a dress. Hulick returned five days later, but she again chose slacks.

Guerin held Hulick in contempt and sent her to jail with a five-day sentence — where she was promptly issued a prison denim dress. Letters by the hundreds flooded the courthouse and the contempt citation was soon overturned by a higher court. Hulick was told she was free to wear pants to court but instead defiantly wore a dress to testify. Point made. 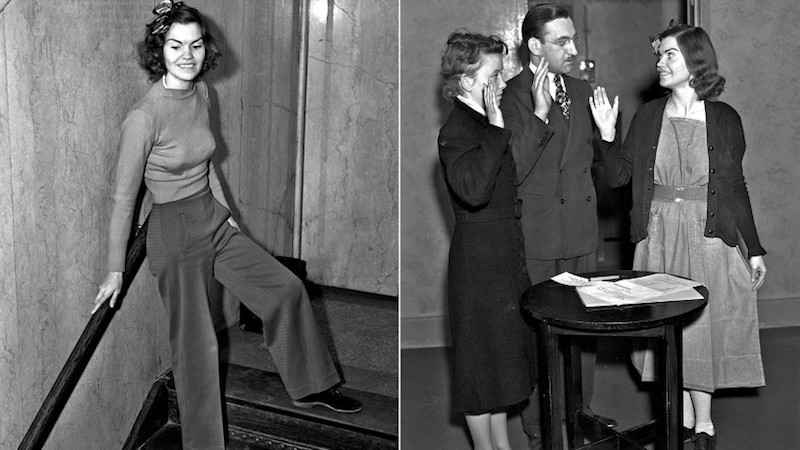 Helen Hulick, a burglary witness, caused a stir in a downtown L.A. courtroom in 1938 by wearing slacks. At right, Hulick, wearing a jail-issued dress, as her attorney works on getting her released. (Andrew H. Arnott / George Wallace / L.A. Times Archive/UCLA)

Just two years earlier, reviews for Hepburn’s 1936 film Sylvia Scarlett — in which Kate spends almost its entirety in short hair and men’s clothing — had been sarcastic and mean-spirited, to say the least. Time magazine declared “Hepburn is better-looking as a boy than a woman” while the New York Herald-Tribune named her “the handsomest boy of the season.” As a result, the film flopped.

Kate’s bosses at RKO decided to commandeer her slacks — in the hope of forcing the independent movie star to wear a skirt and become, um… more marketable? Unmoved by losing her trousers, Hepburn strolled the studio lot in only her underwear. Her pants were returned. Point made.