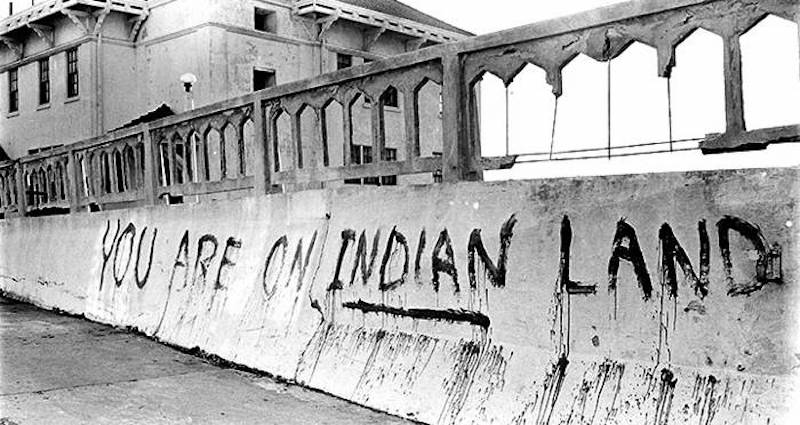 "We hold The Rock," proclaimed Richard Oakes, the occupiers' spokesman. His words became their motto. "The occupiers," wrote Ben Winton in Native Peoples magazine, "were an unlikely mix of Indian college activists, families with children fresh off reservations, and urban dwellers disenchanted with what they called the U.S. government's economic, social and political neglect."

Alcatraz Island, a.k.a. “The Rock,” occupies an area of 22 acres and is located 1.5 miles offshore in San Francisco Bay. It became a federal prison in 1934 — housing notorious criminals like Al Capone and “Machine Gun” Kelly and served as a backdrop for two major Hollywood films Birdman of Alcatraz (1962) and Escape from Alcatraz (1979). The high cost of transporting waste out and fresh water in led to the prison being shut down in 1963.

On November 20, 1969, the island's image underwent a drastic makeover when American Indians began an occupation that would last until June 11, 1971. "The occupation of Alcatraz was about human rights," said Winton. "It was an effort to restore the dignity of the more than 554 American Indian nations in the United States." 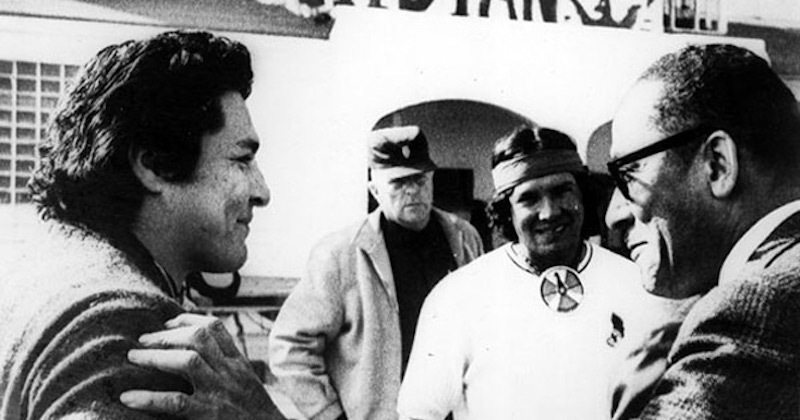 Over 5,600 American Indians took part in the occupation — some for a day, some for the entire 18 months. The set up included a health clinic, a public relations department, a nursery, several kitchens, a grade school, and a security force sarcastically named “The Bureau of Caucasian Affairs” (a jibe at the reviled U.S. Bureau of Indian Affairs) When the U.S. government asked them to leave the island, the occupiers said they only do so in exchange for $24 in glass beads and red cloth.

Twenty-three-year-old John Trudell, a Santee Sioux from San Bernardino, California heard about the occupation, packed a sleeping bag, and headed to Frisco. "He became the voice of Radio Free Alcatraz, a pirate station that broadcasted from the island with the help of local stations" explains Winton. "When he hit the airwaves, the response was often overwhelming. Boxes of food and money poured in from everywhere-from rock groups such as The Grateful Dead and Credence Clearwater Revival, Jane Fonda, Marlon Brando, city politicians, and everyday folks." For the first time in modern American history, the plight of Native Americans was making headlines. 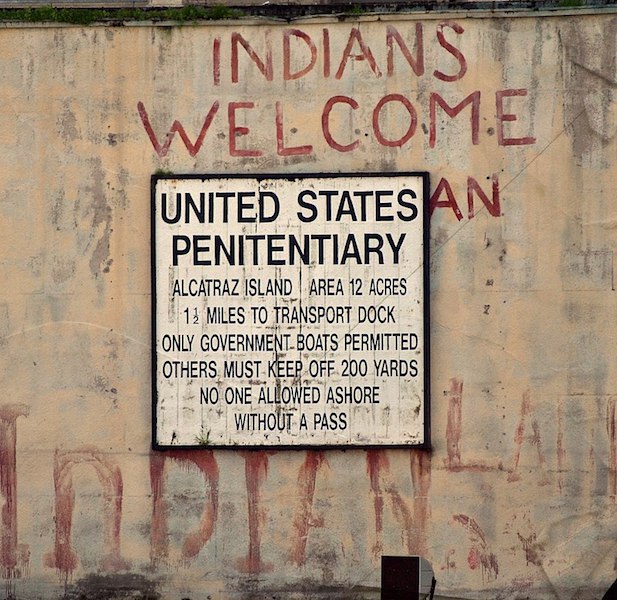 When Richard Oakes’ daughter died in an accident on the island, he headed back to the mainland — leaving a power vacuum. When the island was soon plagued by fires and blackouts, many more occupiers left. By June 1971, armed federal marshals removed those who remained. But this is not a story fo defeat.

The fledgling American Indian Movement (AIM) visited the occupiers and soon began a series of their own occupations across America. AIM would eventually become a powerful multi-tribal protest organization… just one of the many important outcomes of the Alcatraz takeover.

"Despite its chaos and factionalism, the event resulted in major benefits for American Indians," Winton states. These included more than 50 legislative measures supporting tribal self-rule, e.g.

Even today, Alcatraz Island remains part of Native American culture as every November since 1975, on what is called "Un-Thanksgiving Day," Indians gather on the island to honor the occupation and those who continue to fight today.