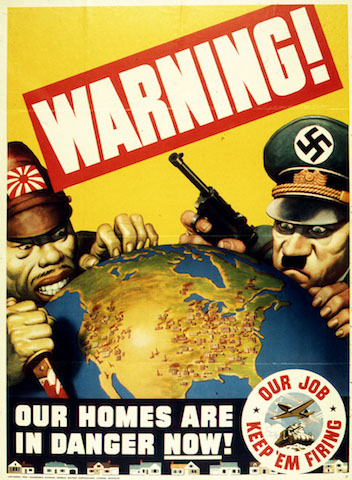 “WARNING! Our Homes Are in Danger Now!,” produced by the General Motors Corporation, 1942

Have you ever heard of the Phantom Barber of Pascagoula? His story is fascinating on its own but it also helps illustrate how similar things were 80 years ago. People are still incredibly susceptible to suggestion and arousal from authorities… and men still do terribly creepy things. But I’m getting way ahead of myself. Let’s rewind back to the night of Friday, June 5, 1942. 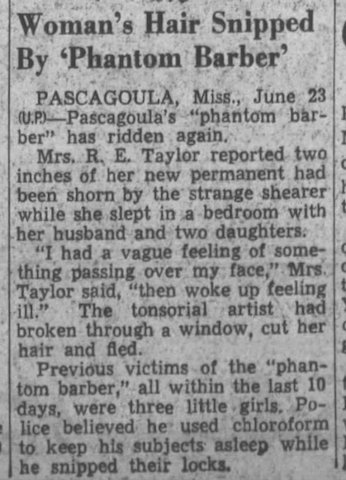 As the U.S. shifted onto wartime mode, a man in Pascagoula, Mississippi was sneaking into the bedrooms of girls and young women. His weapon of choice was a pair of scissors. His modus operandi was snipping off the girls' and women’s hair while they slept. He used the scissors to slice open window screens and, of course, to clip off some hair to take with him.

Pascagoula was already in the midst of recent upheaval. Like everywhere else in the U.S., it was living under nightly blackout regulations to deter potential (but, let’s face it, very unlikely) enemy bombings. Situated on the coast, the small fishing town had also been chosen as the location of a warship construction site. Its population tripled in a matter of weeks. Among other things, this meant:

Translation: With paranoia was already running high, Pascagoula suddenly had some creep giving nonconsensual haircuts to girls as young as six years old.

As the attacks continued, some local men refused to work night shifts in the wartime factories. Instead, they stayed home and stood guard over their wives, sisters, and daughters. It should come as no surprise that local newspapers used this as an excuse to insinuate that the Phantom Barber must be a nefarious foreign plot to sabotage the American war effort (as if men need such an excuse). The government promptly adjusted the blackout rules so Pascagoula could beef up night patrols.

Hmm… let’s see. We have disproportionate government lockdowns and sensationalist media stirring up unnecessary panic. Why does that sound so familiar? Next up comes a situation where another kind of home invasion is lumped into the barber’s category — just to keep the narrative going.

A man broke into the home of a local couple (the Heidelbergs) and beat them with an iron bar. No hair was clipped but the crime was somehow attributed to the Phantom Barber anyway. Now, the public had something else to fear. Clipping a few tresses was one thing. Assault is another. As the hysteria ramped up to a fever pitch, there was another hair-clipping attack. That made 10 barber attacks in about six weeks — 11 if you count the Heidelberg assault. Make no mistake, the police were desperate to make an arrest so they used the pipe beating as a way to save the day. 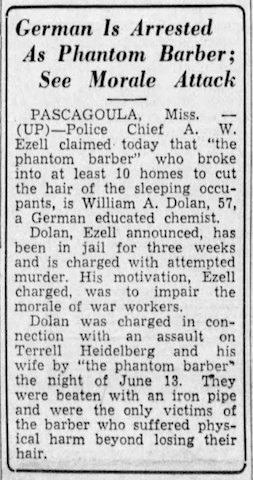 In August, the Pascagoula police arrested William Dolan, a 57-year-old German chemist with reported “German sympathies” and “a grudge against the Heidelbergs.” The FBI claimed to conveniently find some human hair behind Dolan’s house but he was never charged as the Phantom Barber. Public sentiment was whipped into a frenzy against this assumed Nazi collaborator. Dolan was hastily found guilty of attempted murder in the Heidelberg assault and sentenced to 10 years. Again, he was not charged with any “barber” crimes but the public just assumed his guilt in that case, too.

Years later, Mississippi’s governor reviewed the case and ordered Dolan to take a lie detector test. When he passed, he was quietly released. No one ever found out for sure whether Dolan attacked the Heidelbergs or was a traitor to his country or was secretly the Phantom Barber. The truth didn’t matter since he was viewed as guilty of all three in the court of public opinion. You can mark this down as reason #1,942 to never delegate critical thinking to anyone else — especially when they are in a position of power.