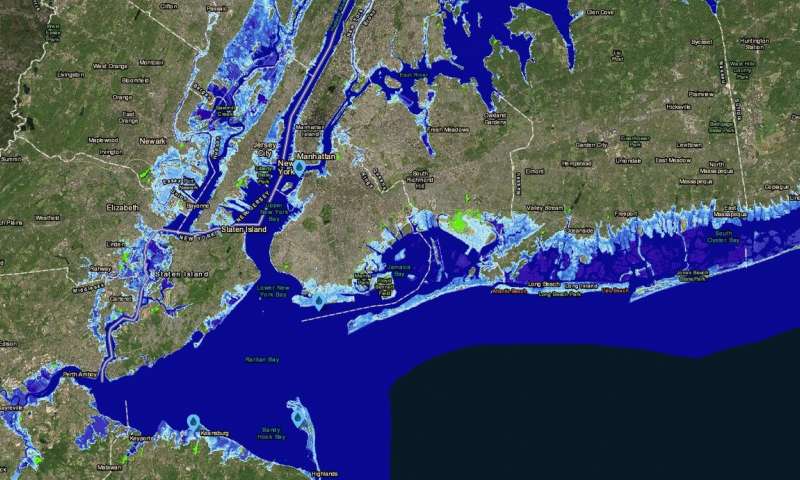 Parts of New Jersey and New York with 8 feet of sea-level rise. An almost 8-foot rise is possible by 2100 under a worst-case scenario, according to projections. The light-blue areas show the extent of permanent flooding. The bright green areas are low-lying. Credit: NOAA Sea Level Rise Viewer

Oct. 8, 2018 (Phys.org) -- Global average sea-level could rise by nearly 8 feet (2.5 meters) by 2100 and 50 feet (15 meters) by 2300 if greenhouse gas emissions remain high and humanity proves unlucky, according to a review of sea-level change and projections by Rutgers and other scientists.

And with 11 percent of the world's 7.6 billion people living in areas less than 33 feet (10 m) above sea level, rising seas pose a major risk to coastal populations, economies, infrastructure and ecosystems around the world, the study says.

From 2000 to 2050, global average sea-level will most likely rise about 6 to 10 inches, but is extremely unlikely to rise by more than 18 inches. Beyond 2050, projections are more sensitive to changes in greenhouse gas emissions and to the approaches for projecting sea-level change.