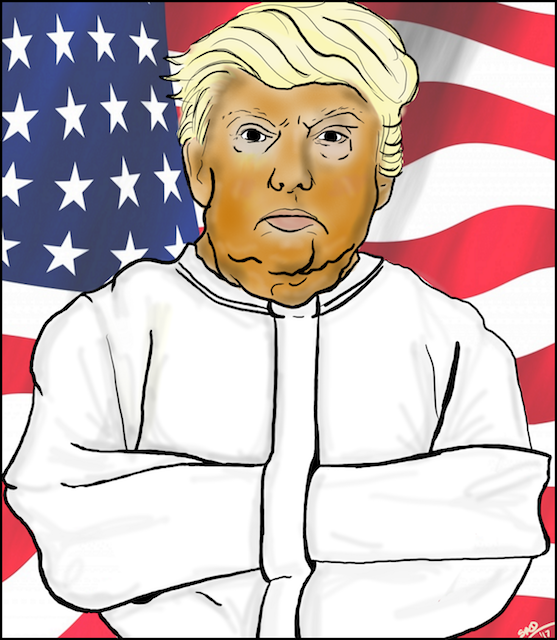 “Have you all lost your mind?” Vladimir Putin replied to one of Megyn Kelly’s thrusts about alleged Russian perfidy toward the United States in the gala interview that debuted her new Sunday Night star-chamber on CNN.

Old Vlad put his finger on something there. His view of the late goings-on in America is like that of the proverbial detached Martian observer of strange Earthly doings, rattling his antennae and clicking his mouth-parts in mirth.

To which retort, by the way, one would have to answer, ”Yes, absolutely.” The toils of slow economic collapse, accompanied by the ceaseless effort by various arms of the Deep State to spin “the narrative” around the voting public’s collective head, has driven the polity insane. And this, of course, is on view in the bedlam that U.S. politics has become, Trump and all. I’m waiting for The New York Times to run the three-column headline that says Russia Racist, Misogynist, and Islamophobic to finally bring together the programmed paranoia of NeoCon / DemProg alliance with the esprit de corp of the new collegiate Red Guard.

Mr. Putin does not have to lift a finger to detonate the groaning garbage barge of U.S. domestic affairs. It’s already ignited and is faring toward a very peculiar species of civil war. You can be sure that the NeoCon/DemProg axis is determined to get rid of Trump at all costs. Impeachment requires some sort of high crime or misdeamenor. So far, going on a year, they haven’t come up with any evidence that the Golden Golem of Greatness acted as a Russian agent in some fashion, and that itself has got to be a little suspicious, considering the thousands of clerks in the spinning mills of those legendary 17 Intel outfits the government runs. How could they fail to come up with a video of the Donald and Vladimir swatting each other playfully with birch switches in a Moscow banya? Five TV sitcom writers could surely come up with an angle -- as long as it was a plausible entertainment.

In the meantime, Trump prevails, the mad bull elephant of the Republican herd, majestically swinging his trunk against everything breakable in the political china shop while trumpeting “Covfefe! Covfefe!” Last week it was the Paris Climate Accords. The op-ed writers in the usual places bounced off the walls of their virtual rubber room in response. Paul Krugman had to be dragged down to hydrotherapy at the NYT after he set his hair on fire. And Rachel Maddow practically popped a carotid artery in her muscular neck from all that shrieking.

I’m a bit more sanguine about the U.S. withdrawal. To me, the Paris Accords were just another feel-good PR stunt enabling politicians to pretend that they could control forces that are already way out-of-hand, an international vanity project of ass-covering. The coming economic collapse will depress global industrial activity whether anybody likes it or not, and despite anyone’s pretense of good intentions -- and then we will have a range of much more practical problems of everyday life to contend with.

Of course, Trump cannot possibly see it that way, given his wish to bring back the America of humming factories and happy workers seeing the USA in their Chevrolets and all that. That fantasy will eventually fade as the inability to get anything done in Washington becomes manifest and obvious. When the “basket of deplorables” sees their hopes dribble away, they will start in with serious mischief of their own, without Trump having to prompt them. Then it will be a quixotic battle between them and the BLM / SJW proxies that the higher-up chickenshits of DemProgdom have so carefully groomed as their vanguard. There will be blood.

Yes, Mr. P, America has lost its mind. The whole thing has turned into some kind of nonstop Kardashian tranny monster truck shit-show of manufactured melodrama and lost causes, inducing a kind of global nausea that may ultimately prove more fatal than the rising surface temperature and melting icecaps. Russia, to its credit, and whatever else you think about it, has some regard for its own survival. Our country prefers the excitement of self-destruction.