Have you ever randomly remembered a person from your past? Not someone with whom you were close, but a unique acquaintance. This recently happened to me. I was thinking of a guy named Gene who lived in my neighborhood back in the day. We weren’t close and we’ve long since lost touch but I can recall three colorful episodes in which he played a role in my life. (All names changed to protect the guilty, the innocent, and everything in-between.)

Gene was about a year younger than me and we shared some physical similarities: dark brown hair and eyes, athletic build. Gene was taller and broader but you could still see why a cop might mistake me for him — from a distance.

I was walking home with my friend Marco, after visiting with his female cousin Gina. Gina and I were somewhat, sorta entangled, as they now call it.

It was Fall so I was wearing my black leather jacket.

I was 19 so I still had a full head of thick curls.

About a block away, a cop car was moving in our direction. The driver slowed down as they passed and, as quickly as you could say 3-2-1, he whipped into a u-turn and pulled up next to me and Marco. I was waved over to the passenger side window and asked to show ID. As I looked for my wallet, I inquired about what was going on.

“We got some calls about a punk with dark curly hair wearing a black leather,” the cop explained with a smirk.

After a cursory glance at my ID, I was told to “stay out of trouble” and the cops pulled away. Once they were out of hearing range, Marco and I smiled at each other and simultaneously said: “Gene.”

By the time the following winter arrived, Gene has cemented quite a local reputation as a frequent and successful street fighter. My group of friends and his were semi-friendly. We played sports, occasionally hung out, but we were young men. This, of course, meant that everything had to be unnecessarily fraught with conflict and competition.

One particularly frigid night, I was outside with two cohorts (Hank and Kevin). We opted to look for one of the local building basement rooms where we could hang out without risking frostbite. As we approached the door to one such room, we could hear blaring music and smell a blend of tobacco and weed. We knocked. Gene answered and welcomed us in to join him and about eight of his buddies. They had an old school boombox on full volume: Physical Graffiti.

The vibe was chill and before long, Gene and I were having one of our standard Stones vs. Led Zep debates. That’s when I noticed something sketchy happening. In Gene’s crew was a guy (Benny) who openly disliked my friend Hank. Benny prompted a few of his pals to “accidentally” shove him into Hank. The first time, Hank laughed it off as a mistake. No harm, no foul.

The second time, Hank responded angrily. Within seconds, Hank and Benny were throwing volumes of punches. I did not like the odds. Sure, I was the oldest guy in the room but Gene had eight allies. I had two. Hank was busy fighting and Kevin was notoriously timid. I braced for the worst.

When Hank knocked Benny down with a hard right hand, Gene and others broke it up to save their dude. Hank came over to stand with me, gasping for air. After whispering with Benny, Gene signaled for the music to be stopped as he approached Hank. I moved in close to listen.

“Benny can’t continue right now,” Gene cooly told Hank. “So he asked me to finish the fight for him.”

Without a millisecond of hesitation — and without consulting me — Hank pointed my way and replied, “Sure, as long as he can finish the fight for me.”

Gene was not the kind of guy to lose face in front of his boys. He was also not the kind of guy to rush into an unfavorable situation. His eyes met mine and I reluctantly did what males are supposed to do. I nodded my head to signify that I indeed had Hank’s back. Meanwhile, my heart was pounding and I was cursing the bro code.

Gene was bigger than me. A very experienced street fighter. We were outnumbered 9 to 3. Hank was exhausted from fighting. Kevin was shitting his pants. I silently prayed that my reputation as a martial artist would be the equalizer.

“Never mind,” Gene said, looking at his friends. “We wouldn’t wanna cost Benny the chance to get even.” He glanced back at Hank. “He’ll bust your ass next time.”

Hank knew better than to speak as I yanked on his coat sleeve. “Let’s go,” I said. Me, Hank, and Kevin backed our way out. The door was closed, the boombox restarted, and I counted my blessings.

About two years after that, we had all grown into more individual, independent lives. Still, it was not entirely unusual for my friends and Gene’s friends to cross paths. One of these episodes still stands out to me.

My friends and I heard about a free party in the lounge of a local “short-stay” motel. It was within walking distance but we were already in my car so I ended up driving us over to check it out. When we arrived, we found Gene and his crew were already there — and already buzzed. We settled at a table that was positioned off the side, slightly elevated. In other words, we had the ideal perch from which to view what transpired next.

There was a third group of young men present that evening. We didn’t know them but they were also buzzed and had apparently sparked Gene’s ire. Big mistake. In an instant, a barroom brawl was in full effect. As they say, it was like watching a movie.

We stayed seated but alert. One of my friends calmly declared, “It ain’t our fight. I’m not jumping in.” I nodded in agreement while marveling at how Gene was punching out anyone who stood before him. Then it happened. A chunky dude on the unknown team recognized that Gene was a formidable foe. So, he grabbed a chair and snuck up on him. Cue the slow-motion:

We all screamed, “Look out!” But it was too loud in the lounge and too late for poor Gene. The chair landed awkwardly. The bottom of one of the legs struck him on the side of the head and down he went. 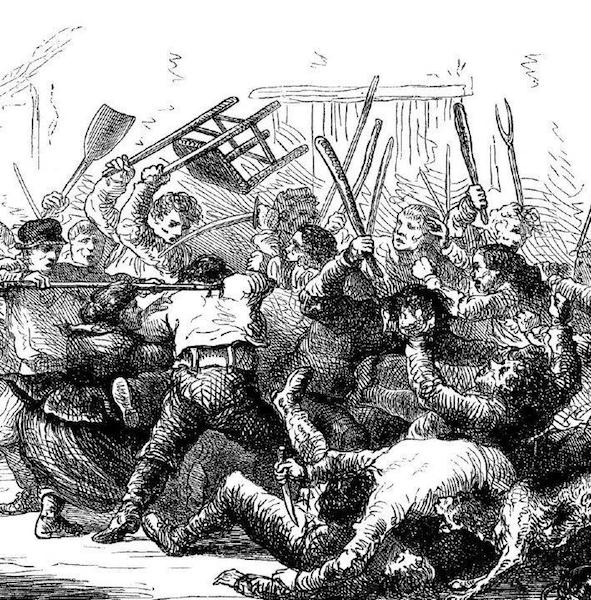 My friends had seen enough and expressed their desire to leave before the cops showed up. I agreed but couldn’t take my eyes off Gene. He struggled to his feet as Patty, his girlfriend, screamed at the sight of all the blood. My eyes met Gene’s. I told my friends they’d be walking home.

Gene took off his shirt and wrapped it around the head wound before stumbling over to me. “Please get me to the emergency room,” he gasped. Three minutes later, he and Patty were in my back seat as I sped toward the old Astoria General Hospital.

The emergency room was pretty empty and Gene was immediately taken in. Patty sat with me a bit and I did my best to assure her he’d be okay. I had seen the chair skid down the side of Gene’s head instead of landing dead on. By a matter of millimeters, he avoided a concussion and possibly being knocked out cold. I didn’t tell her all that though. She was upset enough so I just stuck with my promises that her guy would be fine.

When they let Gene’s girlfriend in to see him, I nodded off in a waiting room chair. It was at least 2 a.m. when I felt Patty’s light tap on my shoulder. She was standing with Gene — his head wrapped in a thick bandage, the bloody shirt back on his torso.

When I dropped them off, I got a sincere hug from Patty and then another from Gene. “Thank you, brother,” he said. “I owe you one.”

Gene nodded his agreement and I headed off to face the daunting task of finding a parking spot at that time of the morning. Me and Gene were good from then on. You might even have called us “friends.”

Coda: I parked far from home. Being a good son (and not wanting to be awakened too early), I left my Dad a note so he’d know where to find the car when he got up. My plan backfired because there was my Dad — at maybe 9 a.m. — urgently shaking me awake.

“What?” I growled but his serious expression snapped me to attention.

It didn’t take much to process that when Gene got into my car at the motel, he must’ve had blood on his hands. I told my Dad the best version of this story I could conjure up on a Sunday morning with so little sleep. He somewhat half-believed me and clearly took solace in the fact that it wasn’t my blood. We agreed to not tell Mom. As soon as he left my room, I fell back into a deep sleep.