From Stop & Frisk to Ecocide: Revolution or Reform? | Mickey Z. 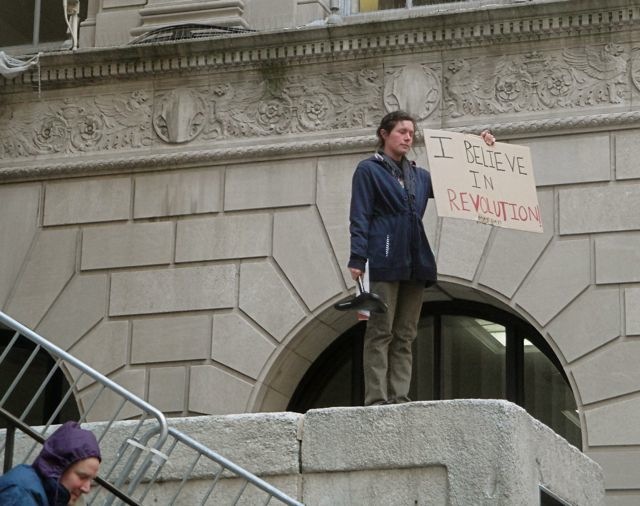 So it seems Shira Scheindlin, a Manhattan federal court judge, stated the painfully obvious when she recently declared the NYPD’s notorious “stop & frisk” program to be unconstitutional.

I say “painfully obvious” because from 2004 to 2011, according to the New York Civil Liberties Union (NYCLU), more than 4 million innocent New Yorkers were subjected to police stops and street interrogations. The vast majority of those being stopped and frisked are black and Latino and roughly nine out of 10 are innocent.

If your blood ain’t boiling, you might wanna re-read the Fourth Amendment of the U.S. Constitution: "The right of the people to be secure in their persons, houses, papers, and effects, against unreasonable searches and seizures, shall not be violated, and no Warrants shall issue, but upon probable cause, supported by Oath or affirmation, and particularly describing the place to be searched, and the persons or things to be seized."

Now, check out the NYPD "Stop and Frisk" breakdown for 2011:

“They’ve been talking about the stop-and-frisk thing for five, six, seven years and nothing’s changed,” said Gregory Campbell, a Brownsville, Brooklyn resident. “They just say it, say it, say it, but the cops come out here and keep doing it. It’s going to take a lot more than just talk.”

However, despite all this and despite Judge Scheindlin agreeing that the program violated the Fourth (protects against unreasonable searches) and the 14th Amendment rights (guarantees equal protection under the law), she didn’t (of course) demand an end to such clear and rampant taxpayer-subsidized illegality. Nope, the judge merely “ordered an independent monitor to oversee the program.”

And we’re supposed to applaud such “reform”? I’ll let Malcolm answer that one:

“If you stick a knife in my back nine inches and pull it out six inches, there's no progress. If you pull it all the way out, that's not progress. Progress is healing the wound that the blow made. And they haven't even pulled the knife out much less heal the wound. They won't even admit the knife is there.”

Reminder: Stop & Frisk is an unconstitutional salvo against people of color but it is not some anomalous flaw in an otherwise fixable system. It’s a symptom.

Single-Issue = Dead End
The Malcolm X quote above also came to my mind last week when I read some of the responses to my article, “Fast Food = Ecocide: Not All Worker Strikes are Radical.”

Besides the usual army of straw men (critics predictably misrepresented my words to accuse me of “victim-blaming”), I also got a few indignant and condescending cries of “oversimplification.” (Of course, not a shred of evidence was offered to back this claim but hey, I’m used to that by now.)

Since my point in the article was to illustrate the bigger, crucial connections between fast food joints and the destruction of the ecosystem, I have a sincere question for all of you: Is it literally possible to oversimplify ecocide?

The answer, of course, is emphatically “no.” However, in the often tunnel vision world of activism -- specifically narrow and single-issue politics -- all bets are off and “reform” always trumps revolution. Let’s be happy when a judge suggests our oppressors monitor, um, well… themselves. Let’s ignore the big picture of environmental doom and instead beg the global death industry to cough up a few extra pennies for our tacit support.

Such an approach does not challenge the power structure; it validates the power structure. If we have to ask the 1% to modify some of their behavior, we are acknowledging and accepting that the possibility of change is their choice and we thus authenticate their freedom to exercise their power over us. (Plus, they've long figured out that offering the occasional minor concession further reinforces this tacit arrangement.)

In addition, a single-issue campaign usually removes the issue from its larger context. The 1% has little problem with the rabble focusing on, say, the working conditions at fast food restaurants.

Translation: Go ahead and hold your rallies to “discuss” the hourly wages at McDonald’s but don’t you ever dare question the global structures that make McDonald’s and its ilk omnipresent -- and, by the way, let’s all agree to not mention ecocide anymore, shall we?

Sadly, most activists proudly march in lockstep to this tune…

While the issue of workplace justice is important, for sure, it's still only a symptom of a disease now in its terminal phase. The time for band-aids passed a long, long time ago.

I repeat: The “problems” activists must expose and address are not merely anomalous flaws in an otherwise fixable system that can be tenderly reformed into sustainability.

Kill the Cop in Your Head
If we buy into the “change the system from the inside” myth and seek crumbs from the 1% table, we will follow the well-trodden path of compromise/surrender blazed by liberals in MoveOn, United for Peace and Justice, the Green Party, and so on.

If we choose instead to recognize the urgency of the myriad global crises, work collectively to dismantle the system, and commence creating new models, we must start doing a whole lot more than putting out fires and cooperating/collaborating with our oppressors.

The predictable -- I'd even say, fearful -- response to this holistic and revolutionary approach goes a little something like this:
"What you're talking about is Utopia."
"You gotta stop dreaming. Get realistic and learn how to play the game."
"Don't you understand that things just don't work like that?"
Blah, blah, fuckin' blah…

If it’s a re-imagining of human culture we desire, we must occupy the big connections and act swiftly and accordingly. We must ask ourselves, each and every day: Which side are we on?