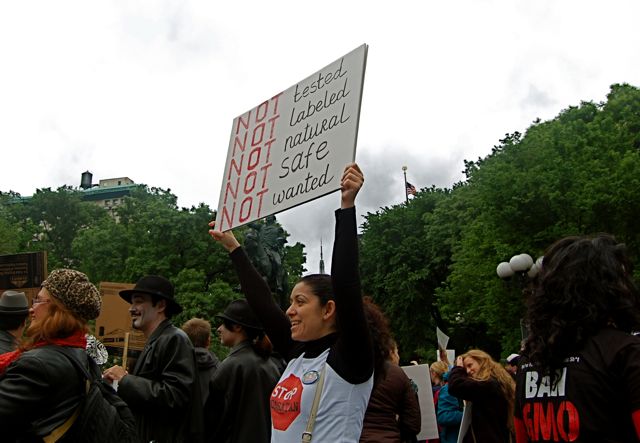 “In nature's economy, the currency is not money, it is life.”

On May 25, 2013, millions marched against Monsanto across the globe. I took part here in New York City, of course, and was fortunate to have the opportunity to lead a teach-in called: “Food Justice, GMOs, & the Vegan Option (Eat Like a Revolutionary).”

The ostensible goals of this event included:

At the request of those who attended the teach-in, I’ve compiled some of the material in an article of sorts. This is not meant to be the definitive word on any of these topics. Rather, I strongly encourage all readers to follow-up with their own research and, of course, share what they find.

Monsanto 101
Monsanto is not a food company.

Monsanto a chemical company that made its name, for example, selling saccharin to Coca-Cola and Agent Orange to U.S. military. Its products also include PCBs, dioxin, DDT, and rBGH.

Monsanto records annual sales of roughly $11.8 billion and operates 404 facilities in 66 countries, over 6 continents with products grown on more than 282 million acres worldwide.

Monsanto is one of three corporations (along with DuPont and Syngenta) that control 70 percent of the global seed market -- aiming for monopoly power over the planet’s food and water supplies.

GMO 101
GMO is short for “genetically modified organism” and is the result of corporate scientists taking genes from one species and inserting them into another species in an attempt to obtain a desired trait or characteristic. GMOs are also known as “transgenic organisms” and the process is often called “genetic engineering” or GE.

Examples of genetic engineering include:

All this and so much more is happening even though, as any non-corporate scientist can tell you, our current understanding of the way DNA works is extremely limited. Any change to DNA can have side effects that are impossible to predict or control. Still, the industry forges on, e.g. 94 percent of soy is GM, 90 percent of cotton, 88 percent of corn, and 95 percent of sugar beets.

Monsanto Protection Act
For those who seek solace in oversight, be warned: the U.S. Food and Drug Administration (FDA) does not require a single safety study, does not mandate the labeling of GMOs, and allows companies to put GM foods onto the market without even notifying the agency.

GMOs were introduced into the American food supply in 1996 and within nine years, the percentage of Americans with three or more chronic illnesses jumped from 7 percent to 13 percent while food allergies skyrocketed.

Which brings us to what is euphemistically known as the “Monsanto Protection Act.” Thanks to the Farmer Assurance Provision, Section 735, of the recently passed spending bill, even if an individual or group were to bring suit against a GM company, no action could be taken until an “Environmental Impact Statement” (EIS) is compiled -- and this typically takes years.

Translation: The product suspected to be dangerous stays on the market until the EIS inevitably declares it safe.

GMOs are bad for the environment. GMOs, explains Greenpeace, "can spread through nature and interbreed with natural organisms, thereby contaminating non-GE environments and future generations in an unforeseeable and uncontrollable way. Their release is genetic pollution and is a major threat because GMOs cannot be recalled once released into the environment."

Most GM crops are engineered to be “herbicide tolerant.” This is why Monsanto sells Roundup Ready crops, designed to survive their Roundup herbicide. As a result, between 1996 and 2008, U.S. farmers sprayed an extra 383 million pounds herbicide on GM crops and the overuse of Monsanto’s Roundup herbicide creates what are called “superweeds,” and thus, even more herbicide is used in the futile attempt to control this cycle.

GMOs interbreed with natural organisms, contaminating non-GE environments. Again: once genetic pollution is released into nature, it cannot be recalled.

GMOs are not the answer to world hunger. The 2008 Friends of the Earth report, "Who Benefits From GM Crops," sums it up well: "The majority of GM crops are not destined for hungry people in developing countries, but are used to feed animals, generate biofuels, and produce highly processed food products -- mainly for consumption in rich countries. GM crops have not increased food security for the world's poor. None of the GM crops on the market are modified for increased yield potential and research continues to focus on new pesticide-promoting varieties that tolerate application of one or more herbicides."

Companies like Monsanto seeks only profit and control. In my 2010 interview with journalist Marie-Monique Robin, she told me: "Monsanto is the world leader in biotechnology and the first seed company. Ninety percent of the GMOs grown in the world belong to it. During the last decade, the firm bought dozens of seed companies all over the world, pushing its transgenic seeds, which are patented. A patented seed means that the farmers who grow it may not keep a part of his crops to re-sow it, the next year, as farmers used to do everywhere in the world. In the United States and Canada, farmers who grow transgenic crops must sign a 'technology agreement.' The no-sowing requirement is clearly expressed. If they don't respect the agreement and violate the patent, they are harassed by the 'gene police' and sued by Monsanto. Clearly transgenic crops are just a tool to control the seeds supply -- which is the first link in the food chain -- by forcing farmers to buy seeds each year."

Next from Monsanto: Gene Use Restriction Technologies (GURTS).

Some radical food choices…
Obviously, we need to do more than talk and listen and learn. We have to put into practice the kind of world we want. In terms specific to GMOs, we can:

FYI: The single most irrigated crop in the U.S. is lawn.

Instead of gardens, we have 40 million acres of lawn from sea to overfished sea. Americans spend $40 billion per yea on seed, sod, and chemicals; one-third of all residential water use in the United States goes to lawns; and lawns require ten times more chemicals per acre than industrial farmland.

“If the Bill of Rights contains no guarantee that a citizen shall be secure against lethal poisons distributed either by private individuals or by public officials,” wrote Rachel Carson some five decades ago, “it is surely because our forefathers … could conceive of no such problem.”

We now produce pesticides at a rate more than 13,000 times faster than we did when Carson wrote Silent Spring in 1962. The EPA considers 30 percent of all insecticides, 60 percent of all herbicides, and 90 percent of all fungicides to be carcinogenic, yet Americans spend about $7 billion on 21,000 different pesticide products each year.

How have we reached this point? One reason is that we’ve opted to blindly trust the morally indefensible and scientifically fraudulent institution of animal experimentation.

This is but one way our speciesist culture intersects with Monsanto. Also, 65 percent of grains -- the vast majority of which is GM -- are fed to the 53 billion land animals murdered for “food” each year.

FYI: These animal “food” products are also not labeled as GE.

For activists to know all this and still consume animal products is at the very least denial and at the very most: sheer hypocrisy.

Translation: Every time you order a pizza to one of your rallies or get a quick bite at McDonalds (or any such death emporium) or opt to chow down on Ben & Jerry’s because the owners are so “progressive,” or plan a turkey dinner for climate change victims, you are voting with your meager dollars for GMOs, unspeakable animal cruelty, exploited human labor, a human health holocaust, higher profits and more control for the 1%, and irreversible environmental degradation.

What kind of irreversible environmental degradation, you ask? Let’s begin with this: The number one source of human-created greenhouse gases is the global animal by-products industry -- factory farming, the meat-and-dairy-based diet.

Let’s re-cap: Each year, 65 percent of untested GM grains are fed to 53 billion doomed land animals in an industry that eats up one-third of the land surface on the planet and is the number one source of human-created greenhouse gases.

Most of all, embracing veganism and animal rights is more than a boycott, a diet, or a lifestyle option. It is a surrendering of a privilege and that privilege is called “speciesism.” Every time someone voluntarily surrenders a privilege, it is an act of revolution. Thus, veganism and animal rights are part of a liberation movement, recognizing that animals are not property, products, or commodities.

At your next sign-making party: Recognize that Monsanto is far from only corporation killing planet via food industry and consider…

Tyson Foods, which became the world's largest poultry and red meat provider after buying Iowa Beef Processors, Inc. (IBP) in 2001. Tyson controls 27 percent of all meat and poultry sales in the United States. One out of every four pounds of chicken, beef, and pork consumed in the United States is a Tyson product.
Fuck Tyson Foods…

Smithfield Foods, the largest pig-farming operation in the united States and the world's largest pork producer. Smithfield controls 26 percent of the U.S. pork market, raising 14 million pigs at its facilities and killing 27 million of the 60 million that went to slaughter in 2006.
Fuck Smithfield Foods…

KFC, the largest purchaser of poultry in the United States.
Fuck KFC…

This is where food justice and our food choices connect directly with Wall Street and with “free trade” agreements like the Trans-Pacific Partnership (TPP).

Not free, not trade
TPP, as described by the Citizens Trade Campaign, is a “massive new international trade pact being pushed by the U.S. government at the behest of transnational corporations. The TPP is already being negotiated between the United States, Australia, Brunei Darussalam, Canada, Chile, Malaysia, Mexico, New Zealand, Peru, Singapore and Vietnam -- but it is also specifically intended as a ‘docking agreement’ that other Pacific Rim countries would join over time, with Japan, Korea, China and others already expressing some interest.  It is poised to become the largest Free Trade Agreement in the world.”

Such an agreement would also give animal agribusiness the opportunity to pressure countries to eliminate import safety standards and eliminate tariffs on U.S. meat, dairy, and egg exports.

Side note to the lesser (sic) evil crowd: Neither party gets it on these issues or wants to get it or will ever get it.

I give you Michael Taylor, appointed by President Obama to the position of deputy commissioner for Foods at the FDA. Taylor is also vice president for public policy at Monsanto, which means he’s in charge of GMOs being put into our food supply.

It starts with alternative vision: While the dominant hierarchy drowns in its own hypocrisy, fear, and greed let’s use our energy and passion to create -- occupy -- a whole new cultural model.

Fuck the entire system because we have reached the point of no return and minor changes are no longer enough.

Fuck the entire system because we recognize the big connections and must stop acting like we’re the last generation of humans.

Fuck the entire system because we must re-imagine our relationship with the natural world, the source of our existence.

Utah Phillips once said: "The earth is not dying. It is being killed, and the people killing it have names and addresses."

With that in mind, here’s our message to the 1%: If you won’t protect all life on earth, we will… and we will do so, by any means necessary.

Peace and power to all species…

NYC event note: To continue having conversations like this, come see Mickey Z. in person at Union Square Park (north) on June 9 for the Third National Animal Rights Day.