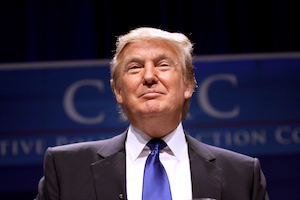 Donald Trump. Credit: Gage Skidmore, Flicker (CC BY-SA 2.0)March 11, 2019 (Pbys.org) -- World War II opened the gates to hell. In 1948, the nations of the world tried to bolt them shut again. They did so with the Universal Declaration of Human Rights, which recognised the inherent dignity of all people and provided the basis on which international human rights law was built. When this bolt was subsequently loosened in countries such as Cambodia, Rwanda and Bosnia, catastrophe ensued.

President Donald Trump could be viewed as toying with this bolt again through his repeated use of humiliation -- of individuals, groups and nations. Although this tactic may have benefited him, humiliation is dangerous for both the humiliator and the humiliated. As Nelson Mandela noted, there is nobody more dangerous than one who has been humiliated. Indeed, humiliation has been argued to be the most underappreciated force in international relations.

Not only is humiliation a violation of human dignity, its consequences are unpredictable. The "humiliation" of Germany following World War I arguably led, in part, to World War II. President Trump's use of humiliation should hence be of concern to both America and the world.