Do you remember your first anti-war protest? | Mickey Z. 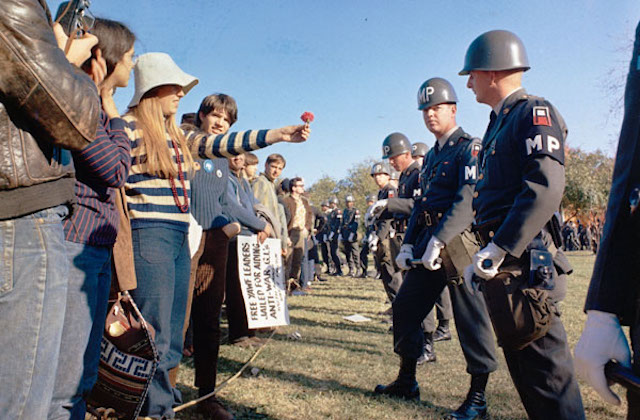 A female demonstrator offers a flower to military police on guard at the Pentagon during an anti-Vietnam demonstration. Arlington, Virginia, USA, 21 October 1967. By S.Sgt. Albert R. Simpson. Department of Defense. Department of the Army. Office of the Deputy Chief of Staff for Operations. U.S. Army Audiovisual Center.

Even as a young child, I understood:

So, it was while hanging out on the stoop with my grade school friends -- just two blocks from the 59th Street Bridge, connecting Queens to the east side of Manhattan -- that I hatched a cynical scheme to (supposedly) capitalize on the above two facts.

About six of us staged our very own anti-war protest amidst the high volume of motor vehicles streaming down Crescent Street on their way to the city (Queens may be one of New York’s five boroughs, but for us, only Manhattan is and will ever be “the city”).

Mimicking the images we saw nightly on our black-and-white TV sets, we made rudimentary signs and posters. One of my fellow subversives wasn’t a regular on the block. He was a little older than me, perhaps a classmate of my big sister. I can’t remember his full name but I do recall that his last name was Castro and that he later became notorious for ending up in the hospital after attempting to ride a motorized mini-bike down a flight of concrete steps.

By the time I was in my teens, I heard a rumor that Castro had died during the commission of a crime. Considering how many of my childhood friends ended up in jail or dying young, this was a rumor to take at face value.

Anyway, I can still see Castro’s chastened expression when I scolded him for a misspelling on his sign: “SPOT THE WAR!” it read.

I insisted he correct it (as if it really mattered). With or without proofreading, we enthusiastically held up our protest posters to passing cars and trucks and yelled “stop the war” until our pre-pubescent voices grew hoarse.

“Someone will call the news,” I promised, “and we’ll all be on TV tonight.”

Our children’s crusade lasted maybe 20 minutes. When it neither ended the war nor landed us on TV, we got bored. One by one, we heard our mothers’ voices calling us to dinner from different windows in the tenement building looming above us. Hunger trumped revolution, and the experiment was over. I don’t believe any of us ever mentioned it again.

All the necessary lessons were right there in front of me, so many years ago, but I wasn’t ready to learn. Not even close. Nope, that part would only happen after decades had passed, many other wars were waged, and I could finally recognize street “activism” for what it really is.

Today, that same anti-war “demo” (or rally or protest or march or whatever) would’ve had its own social media event page. It would’ve been livestreamed. And it would’ve been deemed a “success” if it garnered even one of us a kick-ass profile pic for which we could use the caption: #warrior.

Do you remember your first anti-war protest? by Mickey Z. is licensed under a Creative Commons Attribution-ShareAlike 4.0 International License.