Did a rogue star change the makeup of our solar system? | Bob Yirka 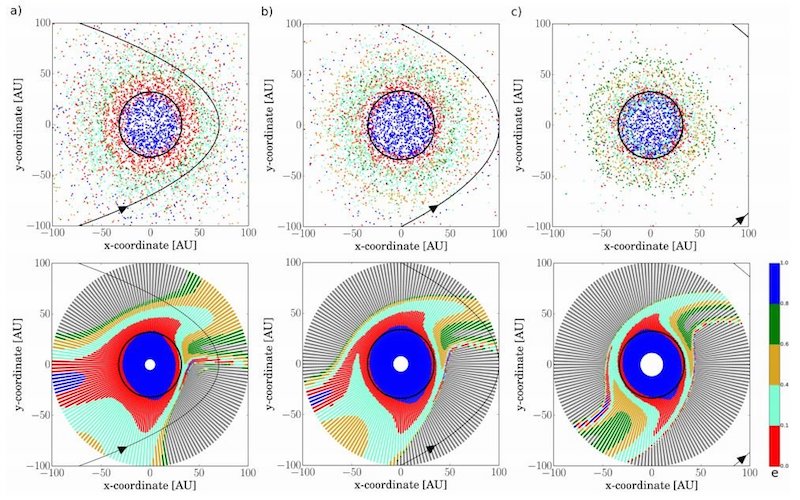 Effect of a prograde, parabolic fly-by of a star with a) M=0.5 M, b) M2= 1, Mand c) M2= 5 M that is inclined by 60 degrees and has an angle of periastron equal zero. The perihelion distance is always chosen in such a way as to lead to a 30-35 AU disc. The top row indicates the eccentricity distribution of the matter with a central area of most particles on circular orbits and more eccentric orbits at larger distances from the Sun. The eccentricities are indicated by the different colors given in the bar. The origin of the different eccentricity populations in the original disc can be seen in the bottom row, where matter indicated in grey becomes unbound from the Sun. Note that in c) the path of the perturber is not visible because it is outside the shown frame. Credit: arXiv:1807.02960 [astro-ph.GA]

July 20, 2018 (Phys.org) -- A team of researchers from the Max-Planck Institute and Queen's University has used new information to test a theory that suggests a rogue star passed close enough to our solar system millions of years ago to change its configuration. The group has written a paper describing their ideas and have posted it on the arXiv preprint server.

In recent years, space scientists have begun to suspect that something out of the ordinary happened to our solar system during its early years. Many have begun to wonder why there is not as much material in the outer solar system as logic would suggest.

Also, why is Neptune so much more massive than Uranus, which is closer to the sun? And why do so many of the smaller objects in the outer solar system have such oddly shaped orbits?

In addressing such questions, many space scientists have begun to wonder if a star might have wandered by during the early years of the solar system -- coming just close enough to pull some of the objects in the outer parts of the solar system from their prior positions.