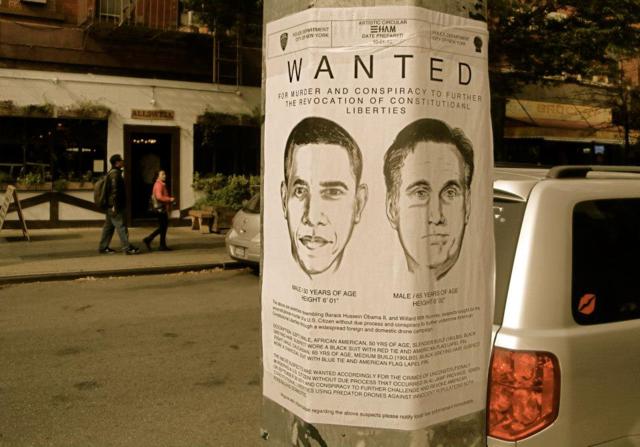 “The oppressed are allowed once every few years to decide which particular representatives of the oppressing class are to represent and repress them.”

Whenever I'd give a talk during 2008, I’d open up by presenting what I called a "public service announcement” and dutifully offer the crowd "some of the many, many reasons why you shouldn’t vote for John McCain."

"He’s raised twice as much money from Wall Street as his opponent. He voted for every Iraq war appropriation bill he faced. He refused to be photographed with San Francisco's mayor for fear it'd be interpreted that he supported gay marriage. He voted against single payer health care. He supports the death penalty, the Israeli war machine, and the fence on the U.S.-Mexican border. He was asked if there was anything that happened during the Bush-Cheney years that the United States needs to apologize for in terms of foreign policy? His response: “No, I don’t believe in the United States apologizing." He voted to confirm Condoleezza Rice as Secretary of State and to reauthorize the Patriot Act. He (pause for effect)... oops. Sorry, I messed up. Those are actually some of the many, many reasons you shouldn’t vote for Barack Obama. My bad... sometimes I just can't tell 'em apart."

This would be kinda funny, of course... if most of you didn’t rush out and vote for Mr. Yes We Can.

Fast-forward to 2012: The Pope of Hope has completed a first term that surely has Henry Kissinger green with envy, but yet the “lesser evil” mythology endures. Thus, I have a request for those of you who challenge so much about society but can’t seem to bring yourselves to recognize the two-party fraud: PLEASE DEFINE “LESSER”

#Occupy Evidence
To help you with this simple assignment, I’ve put together some study notes:

Romney surely did a lot of questionable shit in the past four years but he didn’t, for example, sign the NDAA, wage war on Libya without congressional approval, start a covert drone war in Yemen, escalate the CIA drone war in Pakistan, maintain a presence in Iraq, sharply escalate the war in Afghanistan, and secretly deploy U.S. special forces to 75 countries.

Obama did all that so, technically, Mitt is easily the lesser of two evils.

Romney’s very existence is proof positive that the dominant culture is a virus but he wasn’t the one who signed the Patriot Act extension into law, deported a modern-record 1.5 million immigrants, and continued Bush's rendition program.

Mic Check: It’s not Mitt who helped coordinate the federal and local assault on the Occupy movement. That was change the 1% can believe in... courtesy of Barack Hussein Obama.

So yeah, please go ahead and define “lesser” for me.

Bearing all that in mind, I’ll refrain from presenting more evidence and instead ask the only serious question that remains for those who genuinely care about the future of all life on the planet:

How much time do you think we have?